'Scab' -- The Human Side of Job Changes and Loss 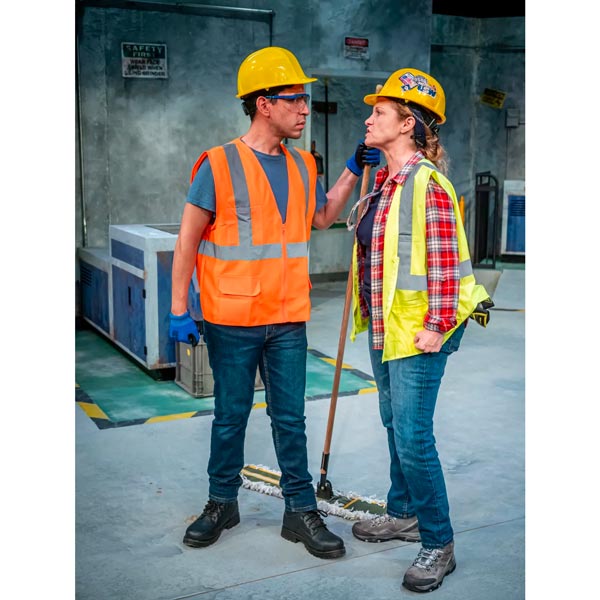 Scab is a Study of What Happens When Jobs Change Hands

A new play titled Scab by Gino Diiorio focuses on the changes that occur when jobs change hands. It involves a U.S. based factory operation that is relocating to Mexico. Jobs in the U.S. side are lost but jobs in Mexico are developed. Each group of people go through major life changes because of this swap. The focus on what happens to them through this process produces an outstanding study in both the good and bad traits that come out in people.

Scab is presented by Premiere Stages running now through September 25 in the Bauer Boucher Theatre Center on the Kean University main campus in Union, N.J. The play was selected as a finalist from the 2020/21 Premiere Play Festival. Because of CoVid shutdowns and restrictions, it is just now running.

Scab features actors John Anthony Torres as the Mexican (Eduardo) who will take over the job held by American worker (Gilda) played by Monica Wyche. Both of these actors turn in outstanding performances. Their concentration on the intensity building inside of them makes for critical moments in the play. John J. Wooten, producing artistic director of Premiere Stages, directs. Mr. Wooten includes some very powerful staging and acting techniques to bring this intensity to life.

The set has very little color to it because it features machines which are part of the factory. The machines appear to have seen better days, but that doesn’t seem to matter because the operation is leaving the site represented on the stage.

The factory in Scab has been a working operation for many years in the United States. A union is firmly entrenched. However, as the factory prepares to move to Mexico, there is really nothing they can do to protect jobs. Longtime employee Gilda accepts an offer to stay on and train new Mexican employee Eduardo. She needs the compensation money promised to her to do this job. However, by union standards, she is considered to be a scab because she is walking over the picket line.

Gilda’s attitude is sharp and unforgiving as Eduardo enters for the start of his one week training process. Eduardo attempts to be friendly and tries to get to know Gilda but she puts up invisible walls of protection. The human characteristics are understandable for both people. But one cannot help but feel sympathy for Gilda because she has been pushed into a situation over which she has no control.

Gilda is focused on completing the assigned tasks so she can sign off on Eduardo and collect her compensation. She pictures the factory working like it did while she worked there. A major important moment occurs when she learns that Eduardo will be doing more than double the work she did and for less money. The light goes on in her head about what is really at stake here leading to a very rough scene on the last day of training. This action opens Gilda to the human side of what is occurring leading her to realize things about herself that really are opposite to what the union wants. She also recognizes the need to examine a new life for herself.

You will need to see how well this critical moment plays out on stage. It is very well done and all aspects of theatrical staging bring it to life. After this moment, the changes that both characters show about themselves demonstrate how much they have gone through. 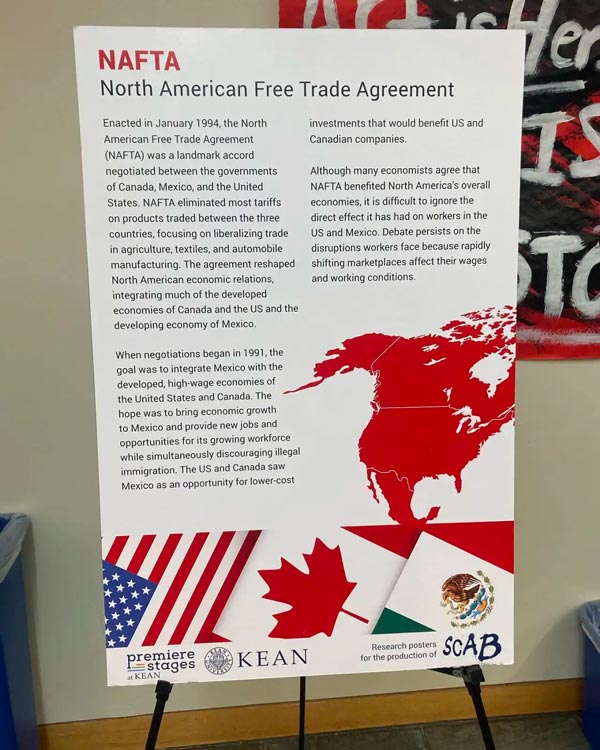 Located in the theater area lobby right next to the Box Office are large poster displays with topics that relate directly to the show. It is well worth coming in a bit earlier than curtain time to read these placards. They show a brief history of NAFTA (North American Free Trade Agreement). It also goes on to show how new enactments in 2020 (USMCA) passed to try to level the playing field. However, this play, written in 2018, shows how American factories are caught up in the allure of moving their operations to obtain less expensive labor costs. 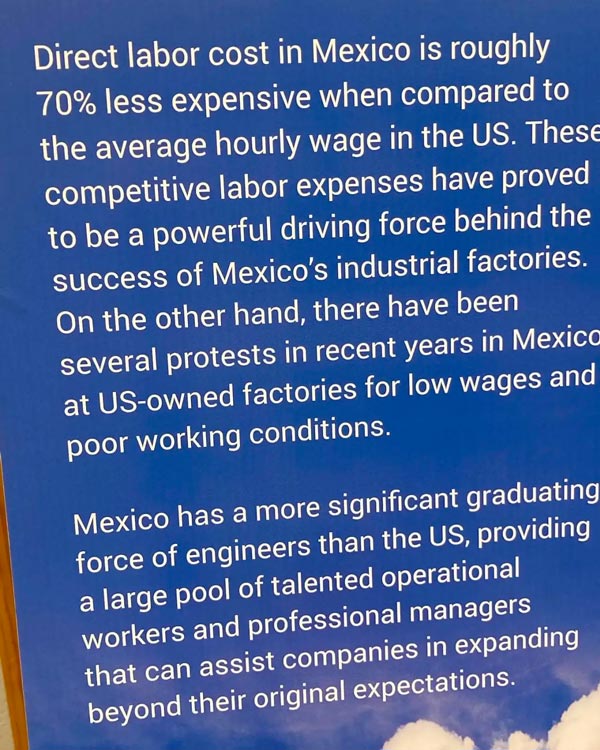 A segment of a placard in the lobby – Photo – K. Nwosad

With that background in mind, the intensity of what happens in the play increases. Scab gives a look at what an employee might deal with when jobs move out of the country with no replacement work for them.

To make reservations or to order a season brochure, call the box office at 908-737-7469 or visit Premiere Stages at premierestagesatkean.com.

Assistive listening devices and sign-interpretation are available upon request; please call 908-737-4077 at least two weeks prior to your desired performance.