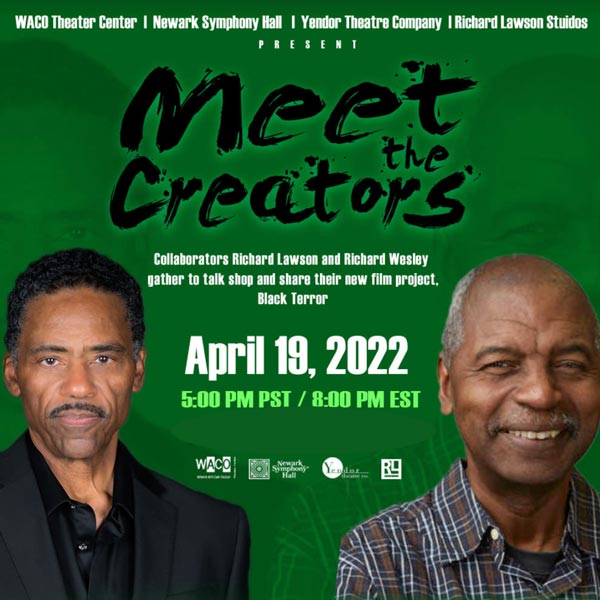 (LOS ANGELES, CA) --  WACO Theater Center, in partnership with Newark Symphony Hall and Yendor Theatre Company, will be hosting Meet the Creators, a virtual conversation between longtime collaborators Richard Lawson, an actor and the co-artistic director of WACO, and Richard Wesley, dramatist, writer and associate professor of dramatic writing at NYU Tisch School of the Arts. The conversation will stream live on April 19 at 8:00pm EST.

During the discussion, Lawson and Wesley will reminisce on the Black Arts Movement, the Black Power Movement and the 50th anniversary of Wesley’s Drama Desk Award-winning play, Black Terror. Fifty years after its original production, this collaboration between Lawson and Wesley combines theater and film as it weaves together the struggles of Black liberation, past and present, and calls upon audiences to ask: What does it truly mean to be for the people?

“We’re in 2022, and we are still looking at the same thing,” said Richard Lawson. “The play itself is addressing something it is trying to get people to take a look at and 50 years later, we’re still on that same page,” Lawson continued.

In addition to the play Black Terror, Wesley’s writing credits include the plays The Mighty Gents (Broadway, 1978) and Autumn (AUDELCO Award recipient for outstanding playwriting, 2017), as well as the motion pictures Uptown Saturday Night (1974), Let's Do It Again (1975), Native Son (1984), and Fast Forward (1985). Wesley has also written episodes for the television series Fallen Angels, and 100 Centre Street, and has served as an adjunct professor at Manhattanville College, Wesleyan University, Borough of Manhattan Community College and Rutgers University.

“If I had a preference, Black Terror would be looked at as an artifact... it would be looked at as an example of where we were at one time,” said Richard Wesley. "Some of the very same things I was talking about as a 26-year-old are being experienced by today’s 26-year-olds... it's the same anger, the same pain, the same necessity of being back in the streets fighting the same battles, struggling against the same issues all over again, and over again,” Wesley continued.

The panel is the second in a series of three virtual events that will lead up to the Fall 2022 premiere of the play-on-film Black Terror, directed by Lawson and adapted from Wesley’s play. The first virtual event took place on March 15 and featured Tina Knowles Lawson, Elaine Brown and other revolutionary women discussing the role Black women play in movements of social change.

Originally released in 1971 at the New York Shakespeare Festival’s Public Theater, Black Terror is considered a seminal work from the Black Arts Movement of the late ‘60s and early ‘70s, and has now been reimagined by Wesley and Lawson for a new generation living in the age of Black Lives Matter.

“We have to be a little bit more proactive in terms of making the difference, and I think Black Terror is going to do that,” said Lawson.

WACO Theater Center is a performing and visual arts organization dedicated to the empowerment of Los Angeles artists and stories of the African diaspora.  Founded in 2016, WACO opened its doors to the public in 2017. Located in the heart of North Hollywood’s Arts District, the state-of-the-art complex includes a 99-seat theater, an art gallery space and is the home of Richard Lawson Studios. Over its five-year history, WACO has invested in more than 700 artists and 1000 young people in Los Angeles and beyond. WACO is committed to providing a creative center where art can occur and give artists and youth a place to grow their talent and celebrate their artistry.