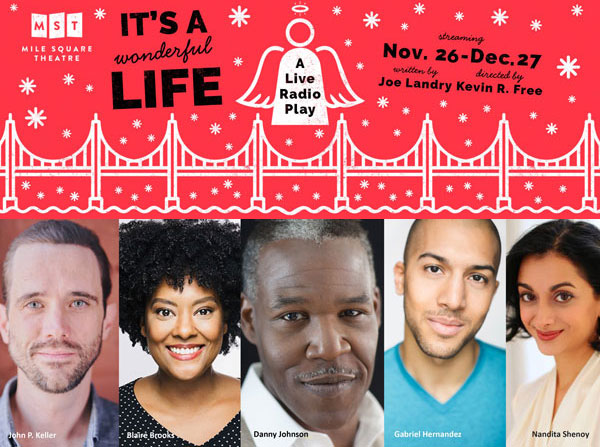 (HOBOKEN, NJ) -- Mile Square Theatre presents the holiday favorite It's a Wonderful Life: a live radio play as its final production of 2020. This production brings the audience into a 1940's radio studio to witness a live reading of the classic film's screenplay. Streaming begins November 26 and tickets will be on sale through December 27.

Joe Landry’s adaptation invites the audience to experience the story as ‘theatre of the mind,’ as we watch the versatile actors play multiple roles, enhanced by sound effects performed by a foley artist. This filmed performance will bring the experience up close to the MST audience and will certainly be a delightful addition to any home’s winter holiday watch list.

“This will be the 5th time MST has produced Joe Landry’s clever adaptation of the classic film, and of course, there’s a bit of a twist with this year’s production,” says MST’s Artistic Director Chris O’Connor.  “With the theatre closed due to COVID, we’ve had to redefine and reimagine what we do. We are essentially turning the play into a movie, and MST’s space will function as a sound stage. We are adhering to strict health protocols, so the actors will be filmed one at a time, then the work will be composited in the editing room. The wonderful Kevin R. Free (MST’s Pipeline) will be directing, and our good friends at Branding Shorts will be shooting and editing the piece.”

Tickets are $25 and are available for purchase online. Once purchased, audience members will be emailed a link through which the stream may be accessed. Link is valid until used.

This program is made possible in part by funds from the New Jersey Council on the Arts/Department of State, a partner agency of the National Endowment for the Arts; and by funds from the National Endowment for the Arts, administered by the Hudson County Office of Cultural & Heritage Affairs, Thomas A. Degise, County Executive, and the Board of Chosen Freeholders.

Danny Johnson (Mr. Potter) has proven to be a versatile actor with limitless range during a career spanning multiple decades in Film, Television, and the Broadway Stage. Broadway; All The Way, and The Song of Jacob Zulu. Off Broadway: The Last Saint on Sugar Hill, Our Lady of 121st Street, and A Soldier's Play. Regional: The Skin of Our Teeth at Berkshire Theater Group. Familiar at The Old Globe, Seven Guitars at Yale Repertory, The Mountaintop at True Colors Theater, What I Learned in Paris at Alliance Theater, Joe Turner’s Come and Gone at The Goodman Theater, and A Raisin in the Sun at Intiman Theater. Additional productions at: Steppenwolf Theater Company, Huntington Theater Company, St Louis Repertory Theater, and Cleveland Playhouse among many. Television: Pose, Bluff City Law, Daredevil, Luke Cage, For Life, Quantico, Shades of Blue, Madam Secretary, Law and Order SVU, Gotham and House of Cards, among many.  Film: Villains, Lazy Susan, Still Here, Don King: Only in America. @trudannyjohnson

Nandita Shenoy (Violet) is an actor-writer living in New York City.  Her last role on stage was Lucy Steele in Sense & Sensibility.  Nandita has starred in the Off-Broadway production of her own play Washer/Dryer at Ma-Yi Theater Company and has originated roles in world premieres of plays by Adam Szymkowicz, Madhuri Shekar, Chelsea Marcantel, Eric Pfeffinger, and Richard Dresser. She spent a season in the Repertory Company at the Alabama Shakespeare Festival. Television credits include season 3 of Netflix’ “Daredevil” and “The Last O.G.” on TBS.  As a playwright, her work has been performed in New York, Los Angeles, and Chicago as well as in Shanghai. She is a proud member of the Ma-Yi Writers Lab, dtfwaw, the Dramatists Guild, Actors Equity, and SAG/AFTRA. Nandita holds a BA in English literature from Yale University. www.nanditashenoy.com

Gabriel Hernandez (Clarence) is an actor, emcee, voiceover artist, and educator who was born and raised in Hoboken and is beyond thrilled to be making his debut at Mile Square Theatre. Recent credits include La Canción (Repertorio Español), El Coquí Espectacular and the Bottle of Doom (Two River Theater), the 2x Drama Desk Award nominated CasablancaBox (HERE Arts) and The NY Times Critic’s Pick ¡Guaracha! (Puerto Rican Traveling Theater), for which he received an ATI nomination for best actor in a musical. His solo show Quarter Rican is currently in development at Pregones Theater in the Bronx. He lives in Jersey City Heights with his three-year-old Elias and his adorable and precocious wife Rachel.

Blaire Brooks (Mary Bailey) started her acting career in NYC after recieveing her MFA in theater performance from Rutgers University. Film/TV: Like Father, Demolition. Bull, Law & Order: CI, Blindspot, Friends from College, Blacklist, The Following. National commercials for Progressive, CDW, Microsoft, FedEx, Heineken, NY Lottery, and Booking.com. She has performed Off-Broadway at the Public Theater and Manhattan Theater Club. She is a company member of the Charleston, SC-based theater company Crescent Stage and Mile Square Theater. Her most favorite and cherished roles here at MST have been Darzee in The Garden of Rikki Tikki Tavi, and Lilly in Lilly's Purple Plastic Purse.

Chris O’Connor (MST Artistic Director) is Founding Artistic Director of Mile Square. In 2017 he received an Award of Excellence from the New Jersey Theatre Alliance for his stewardship of MST. He conceived and produces MST’s annual 10-minute play festival 7th Inning Stretch. He has directed over 20 productions at MST and has directed at theatres and universities all over America, most recently Franklin Stage Company, where he directed Billy Bishop Goes to War. His recent work at MST includes I and You, Betrayal, Circle Mirror Transformation and Long Gone Daddy by Joseph Gallo. As an actor, Chris has performed in such theatres as Maltz Jupiter Theatre, Franklin Stage Company, Seattle’s A Contemporary Theatre, The Culture Project, Soho Rep, Center Theatre Group, Gloucester Stage, Provisional Theatre of Los Angeles, The Bathhouse Theatre, Seattle Children's Theatre, and City Theatre in Pittsburgh, where he originated the role of Peter in Craig Wright’s The Pavilion. Recent TV/film credits include Magic City, Burn Notice, and the indie thriller Depraved. He has taught at SUNY Purchase, Rutgers University, University of Miami, and is Interim Chair of Theatre Arts at Molloy College/CAP21. BFA, Carnegie-Mellon University and MFA, Rutgers University.

Andrew Baldwin (Producer) is the Director of Operations at Mile Square Theatre, where he has aided in the production of dozens of plays since 2015. His acting credits at MST include The Garden of Rikki Tikki Tavi, A Midsummer Night’s Dream, 12fth Night, A Year with Frog and Toad and Core Values. Other regional/national tour: Vanya & Sonia & Masha & Spike and Alvin and the Chipmunks: The Musical. New York credits: Scraps (The Flea), Romeo and Juliet (Columbia Stages), Dex!: A Killer Musical (FringeNYC), What We're Up Against, Bull (New Wave Theater Collective), Taming of the Cats (The Brick), O Walter, My Walter (COW Theatre), and 54: The Musical (Emerging Artists Theatre). Television: Law and Order: SVU, The Foods That Built America. Education: BFA University of Miami.

Branding Shorts (Videography) is an award-winning Hoboken-based creative agency founded by husband-wife team, Micki Pagano-Parente and Tony Parente in 2008. Branding Shorts creates content for national and local clients, (such as Rockefeller Group, American Express, American Cancer Society, the City of Hoboken, Mile Square Theatre, and many others) and is winner of 28 industry awards, including 12 Telly Statues.