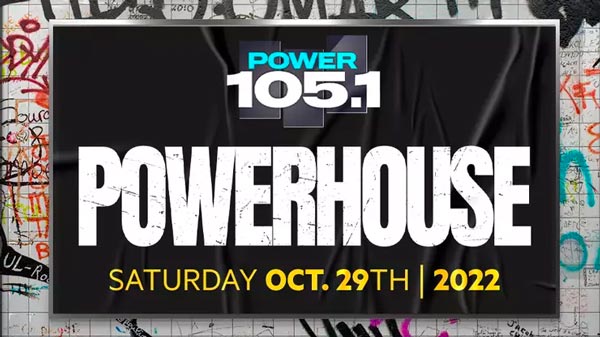 Power 105.1’s on-air personality Angie Martinez officially announced the all-star performers on-air for Powerhouse which will include Kodak Black, Fivio Foreign, Moneybagg Yo, Tems, SpinKing and Friends with more to be announced.

Power 105.1’s Powerhouse tickets will be available to the general public beginning Friday, September 16 at 12:00pm EST via Ticketmaster.com. In addition, fans can listen to win tickets and stay up to date on this year's biggest Hip-Hop and R&B concert on Power1051fm.com. Fans can prepare for Power 105.1’s Powerhouse by posting on social media, tagging @power1051 @PruCenter, and using the hashtag #PowerhouseNYC.

"We're thrilled to celebrate the biggest names in Hip-Hop and R&B again this year at Power 105.1’s Powerhouse,” said Thea Mitchem, Executive VP of Programming/Program Director at iHeartMedia New York’s Power 105.1. “This will be an unforgettable show that fans will not want to miss!”

Power 105.1’s Powerhouse is powered by Berkeley College, Bravo Supermarkets, C-Town Supermarkets, Hennessy, Lincoln Tech, Metro Plus Health, and Personal Touch CDPAP. For up-to-minute information on Power 105.1’s Powerhouse, fans can log on to Power1051fm.com using the keyword: POWERHOUSE and listen to Power 105.1 on-air or online via the station’s website as well as on iHeartRadio.com and the iHeartRadio mobile app, iHeartMedia’s all-in-one music streaming and digital radio service.

Power 105.1 is the leading media outlet in the New York market with multiple platforms, including its broadcast stations; live events; data; and its digital businesses and platforms, including mobile, social and its own iHeartRadio, iHeartMedia’s free all-in-one digital music, podcasting, and live streaming radio service – with 3 billion app downloads and more than 160 million registered users.

iHeartMedia New York owns and operates WHTZ-FM, WKTU-FM, WAXQ-FM, WWPR-FM, WLTW-FM, WOR-AM, and WWRL-AM and is part of iHeartMedia. iHeartMedia, Inc. [Nasdaq: IHRT] is the leading audio media company in America, reaching over 90% of Americans every month. iHeart’s broadcast radio assets alone have more consumer reach in the U.S. than any other media outlet; twice the reach of the next largest broadcast radio company; and over four times the ad-enabled reach of the largest digital-only audio service. iHeart is the largest podcast publisher according to Podtrac, with more downloads than the next two podcast publishers combined and has the number one social footprint among audio players, with seven times more followers than the next audio media brand, and the only fully integrated audio ad tech solution across broadcast, streaming and podcasts.  The company continues to leverage its strong audience connection and unparalleled consumer reach to build new platforms, products, and services.

Prudential Center is a world-class sport and entertainment venue located in downtown Newark, New Jersey. Opened in October 2007, the state-of-the-art arena is the home of the National Hockey League’s (NHL) three-time Stanley Cup Champion New Jersey Devils, Seton Hall University’s NCAA Division I Men’s Basketball program, and more than 175 concerts, family shows, and special events each year. The arena is also home to the GRAMMY Museum Experience Prudential Center, which opened its doors to the public in October 2017. The 8,200-square-foot experience marks the first GRAMMY Museum outpost on the East Coast and features a dynamic combination of educational programming and interactive permanent and traveling exhibits, including a spotlight on legendary GRAMMY winners from New Jersey. Ranked in the Top 8 nationally by Pollstar, Billboard, and Venues Today, Prudential Center is recognized as one of the premier venues in the United States, and over 2 million guests annually.