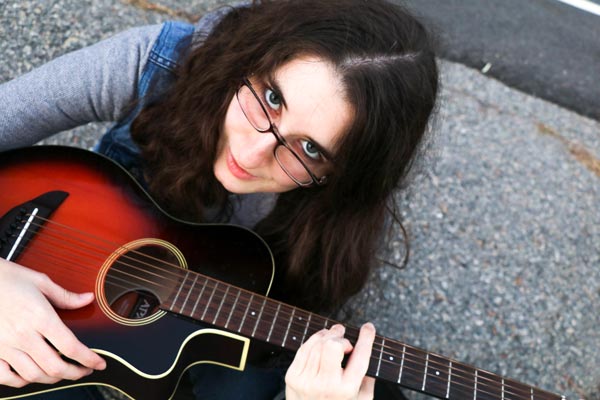 Prolific North Jersey singer-songwriter Amanda Rose Riley is set to release her fifth studio album in as many years on June 3.

“Broken Heart,” the title track single, is the Makin Waves Song of the Week.

As the Makin Waves Song of the Week, “Broken Heart” also can be heard between 6 and 8 p.m. on May 27 on “Radio Jersey” at ThePenguinRocks.com. If you miss it, you also can tune in any time at The Penguin's archives or at Mixcloud.

With five albums, plus a live collection to her credit in the midst of a two-year pandemic, obviously Amanda Rose doesn’t believe in waiting to pursue a dream. She’s the type of artist to record albums in her bedroom when she can’t afford a studio, to follow a strict weekly live streaming schedule for two years running, and to bring a guitar with her on every trip she takes just in case there’s an open mic or other opportunity.

“Broken Heart” is one of seven unapologetically intense songs about unrequited love featured on the forthcoming album.

“This was definitely the track that I was most proud of right off the bat,” Amanda Rose said. “It’s simple in a lot of ways because it doesn’t involve too many different lyrics or chords, but I tried to make it interesting and varied in structure and what limited production I was working with -– just vocals and acoustic guitar.”

Amanda Rose said she writes constantly and has taken on multiple songwriting challenges, such as a song a week for a year or 50 songs in 90 days.

Her forthcoming LP took her in a different musical direction, she said.

“I write a lot of songs about my relationship with music and following my dreams, because that takes up a lot of my time and emotions,” she said. “‘Broken Heart,’ on the other hand, is a collection of unapologetically intense songs about unrequited love. There are so many relationship and break-up albums out there but not as many about unrequited love. There seems to be a cultural belief that unrequited love isn’t ‘real’ love, and we shouldn’t feel too strongly about it, we don’t need to talk about it, we don’t need to care for people going through it the way we would for someone who’s gone through a break-up. That if you like someone who doesn’t like you back, you should just get over it. That you can’t truly have feelings for someone until you’re in a relationship with them. That’s simply not true. You can have very intense romantic feelings toward someone who doesn’t like you back, particularly if it’s someone you know pretty well. No emotional experiences should be viewed as more valid than others.”

Amanda Rose’s hard work and determination have led to such opportunities as performing with The Bouncing Souls at the Stone Pony in Asbury Park and with her favorite artist, Frank Turner, on multiple occasions.