SOPAC Is Back and Featuring a Singer-Songwriter Series

The “interesting time” was only partially COVID-related. In the summer of 2021, after SOPAC was finally able to invite the public back, further challenges arose. On September 1, instead of preparing for an evening show, SOPAC staff were instead battling the impact of Hurricane Ida as it tore into town and left the facility seriously damaged in its wake.

“If it wasn’t for a Shuttered Venues Operator Grant,” Billia told me, “SOPAC would not be in operation.” This grant, set up by the Small Business Administration’s “Economic Aid to Hard-Hit Small Businesses, Nonprofits, and Venues Act” and administered by SBA’s Office of Disaster Assistance, supplied more than $16 billion in grants to affected venues. 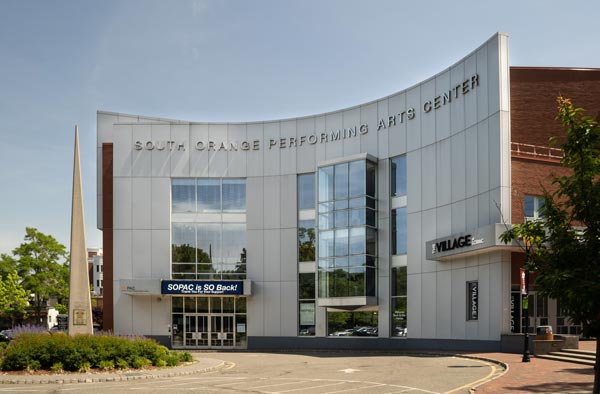 “This infusion of Federal, State (e.g., from NJ State Council on the Arts), and other foundation money, together with lots of generosity on the part of audience members, donors, and people in the community, helped to prop us up.”

In addition to repairing extensive storm damage, SOPAC got some much-needed updating. “We fixed the lobby, painted and redecorated several areas, and basically refreshed the place,” Billia said. “I feel like we are getting a fresh start.”

Despite the obstacles they faced, SOPAC never completely shut down. “We still had The Loft,” Billia said. “We presented a popular monthly comedy series, Laughs in the Loft, and had jazz and blues performers there.”

Throughout those trying times, Billia and the SOPAC staff were also buoyed by an outpouring of community support. “People wrote and told us how much the theater means to them and what a treasure it is,” she said. “It was very touching.”

Despite the remarkable progress made, Billia acknowledges that things aren’t quite back to normal yet. “There is still a gap between what we were bringing in before and our revenue now.”

But rather than focusing on the past, SOPAC is looking ahead – they hosted a Re-Opening Party on May 21 and held an official Ribbon Cutting Ceremony on May 25 – and are “delighted to welcome back many of our friends and supporters, be with people we haven’t seen in a while, and show-off our new look,” Billia said. 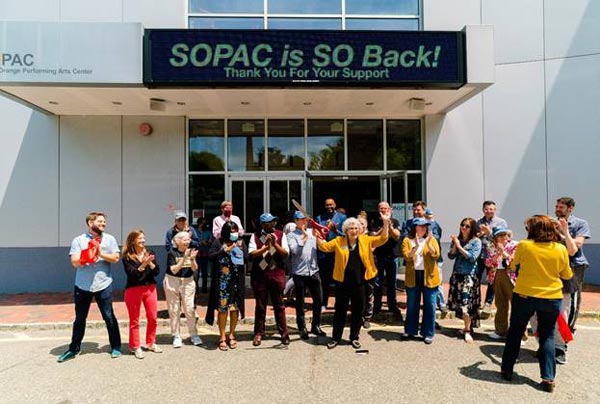 And if the strength of the lineup for late May and June is an indicator, SOPAC is on a positive path. Upcoming shows shine a spotlight on singer-songwriters, and I asked Billia why she thinks that genre continues to appeal to audiences.

“Singer-songwriters have been with us since the beginning of time,” she said. “People love to hear the stories told in a personal way.”

And SOPAC, she says, is the ideal place for that experience. “We go to the theater for that human connection.”

“It’s a gorgeous building, a jewel in every way,” she said. “The acoustics are great, and with its size – just 439 seats – it creates the intimacy that a singer-songwriter needs.”

“Small is beautiful,” Billia said. “People can see their favorite artists and never be more than 50 feet from the stage.”

To emphasize that sentiment, Billia recalled a Mary Chapin Carpenter concert from years ago. “A person in the audience called out the name of a song, and Chapin Carpenter said she wasn’t sure if she remembered all the lyrics,” Billia said. “So, someone in the front row pulled it up on their phone, handed it to her, and she sang it from the phone.”

“That’s what live performance is all about.”

Not surprisingly, SOPAC draws its audience not just from Essex County but from a dozen or more other NJ counties, as well as the tri-state area and beyond.

“People who follow their favorites are willing to travel to a particular venue if it’s the only place in the area where that artist is performing,” she said.

I told Billia that I recognized all the names except Bria Skonberg. “This will be her first time performing here,” Billia said. “She is a masterful musician who started out playing piano and moved to the trumpet in her teens,” she said. “She performs and she teaches, and she has won all kinds of awards.”

“She has become one of my new favorites.”

You can listen to SOPAC’s Singer-Songwriter playlist on Spotify and explore the artists’ videos on the venue’s wonderful website.

Both Anders Osborne and Jackie Greene are accomplished songwriters, musicians, and performers. They’re also friends, adding an additional dimension to their performances together. On the website, their upcoming show is described as “an evening of old-fashioned tune-trading.” I think you get the picture.

Max Weinberg’s Jukebox is audience participation at its best, as Weinberg – Rock and Roll Hall of Fame drummer and South Orange native – gives the audience a chance to create the evening’s setlist in real-time.

We then talked about Roger McGuinn, “He’s legendary, a classic,” Billia said, “People love him.” I knew that McGuinn started out playing folk music, and I asked him in an email what the appeal was. “I loved the human interest and the melodies of the old songs,” he wrote.

At this point in our conversation, I told Billia that I am a huge Joan Osborne fan, have seen her in concert half a dozen or more times, and have always been enchanted. Billia agreed that Osborne is something special. “She is an exceptional performer,” she said, “and she has that fantastic voice.”

Moving away from the performances for a moment, I asked Billia to tell me what a part of SOPAC’s mission statement,

“to enrich individual lives, and to engage and serve those in our community and beyond, through arts experiences that inspire and transform,”

“Our community inspires me,” she said, “and we committed to serving our community and reflecting its diversity in a deep and relevant way.”

For example, in March, SOPAC presented the Resistance Revival Chorus, a large, diverse group of women who sing powerful songs of freedom, joy, and spirituality, and – as the name suggests – resistance.

Billia said they brought down the house. “The audience was on their feet,” Billia said. “I will never forget it.”

You can read Shen's interviews with Joan Osborne and Bria Skonberg here.