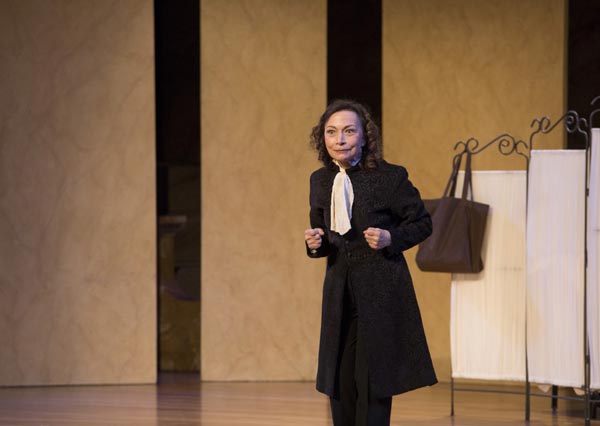 Who on earth was Dr. Mary Walker?

# She was one of the few women doctors in the Civil War, working for the North.

# She was captured and tossed into one of the Confederacy’s hell hole prisons, where she struggled to stay alive.

# She won the Congressional Medal of Honor.

That sounds like several movies right there, yet vey few people know who she is today.

“I subscribe to American History magazine. I came across a one-page article about Dr. Mary Walker. I had never heard of her, but her life was fascinating. Why didn’t I know her? Why didn’t everybody,” said Lloyd J. Schwarz, who wrote the one-woman play Independence: The True Story of Dr. Mary Walker, that will be staged this coming Sunday, March 20, 3 p.m., at the Hopewell Theater, in Hopewell.

Tina Dwyer, the producer of the play, saw it in Seneca Falls, New York, a few years ago. She,  like playwright Schwarz, had no idea who Dr. Walker was. “I love untold stories and that is what appealed to me,” she said. “It is a fascinating story, yet few have heard it. U.S. history is full of stories like that and I want to bring a lot of them, this one in particular, to the public.”

She thinks the story of Dr. Mary Walker is important for another reason. “Unfortunately, stories about women’s history are not a hot topic.  There are a lot of unknown women whose stories are interesting,” said Dwyer.

The play has been staged at high schools and theaters over the last few years and the reaction is always the same. “Kids are amazed by it, especially high school boys. They all say ‘I didn’t know that’,” said Dwyer. “We staged it with some Princeton professors in the audience and they were blown away by it. The reaction is universal.”

Actress Kathie Barnes, who plays Dr. Walker in the play, is a stickler for accuracy in history plays, and has an interest if Civil War prison camps. That’s why she signed on for Independence.  “Castle Thunder was one of the most brutal prisons in the Civil War. Mary became so malnourished that it affected her eye sight and she lost much weight. The prison was filthy and the guards were brutal. The prisoners were at the mercy of men who thought nothing of  killing or beating them.  Mary did not give in to this and even while enduring horrible days  there, she tried to help people of every race and would openly ask the prison authorities for decent food and clothing for the prisoners even though she was jeered by them for it. She would also give her food to other prisoners,” said the actress.

It was natural that Mary Walker became a doctor.  Her father, Alvah, was a sick child. He studied medicine at first to help himself and then used what he learned to help other. He never actually was a licensed doctor. “He was a ‘country doctor,’” said actress Barnes. “During her youth, Mary read medical books her father had accumulated and felt her calling was to become a doctor.”

There were, of course, problems with being a woman doctor in the Civil War. “…dealing with men, who in that time frame considered women ‘lower’ as well as believed women were not able ‘to do a man’s job’ like be a doctor or anything with authority. Men were not used to women examining them and it took a while for some to believe that this woman, who dressed unlike a woman and not like a man, was a serious doctor,” said the actress.

Dr. Walker generally wore a woman’s dress, but usually wore men’s trousers underneath it. She felt this type of dress was healthy, but others saw it as trying to be like a man.

“She did not see it that way,” said producer Dwyer. “She always said these were not men’s clothes but ‘my clothes.’”

Dwyer is high on actress Barnes. “She is phenomenal...stellar,” said Dwyer.

Most people are surprised at how much actress Banes knows about Walker’s life and how it fit into the story of the Civil War. “That’s right,” said Dwyer when told that Barnes seemed perfect for the part. “She embraces Dr. Walker.”

Dr. Walker was married in 1855 to Albert Miller when she was 23. A staunch feminist already, Mary Walker refused to say the word “obey” in her marital vows. She and her husband divorced after a few years (she accused him of cheating on her). She earned her doctor’s degree at the Syracuse Medical College, where she was the only woman in her class. When the Civil War began, she was at first only used as a nurse, but within a few years became a surgeon.

After Dr. Walker was released in a prisoner exchange, she finished the war tending to the needs of soldiers. After the conflict, she was awarded the Congressional Medal of Honor. The government took Congressional medals away from several hundred recipients but in 1977 Congress restored her medal to Mary.

Dwyer wants people who see the play to learn a lot about Dr. Walker and the Civil War, but she wants them to learn something else. “I want them to see this woman who defied the odds and became a doctor and say to themselves, I can defy the odds, too, and achieve my dream.”

For more information or to purchase tickets, click here.