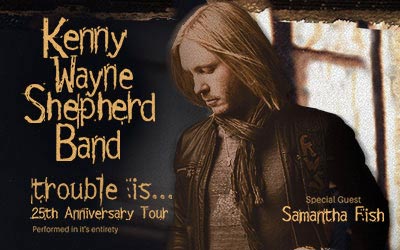 See acclaimed blues guitarist Kenny Wayne Shepherd and his band live in concert with the trouble is... 25th Anniversary Tour! Shepherd's hits include “Blue on Black,” “Slow Ride,” and “Deja Voodoo.” Throughout his 30 year career, Shepherd has sold millions of albums worldwide, received five Grammy® nominations, two Billboard Music Awards, and two Orville H. Gibson awards. He has had seven #1 blues albums and has topped the charts with his rock singles. He has also appeared on The Tonight Show, The Late Show, Jimmy Kimmel Live, and Late Night with Jimmy Fallon.