I enjoyed my outdoor experience at Shakespeare Theatre of NJ’s presentation of Much Ado About Nothing so much that I continued on the next week to an outdoor concert. Next stop: GSP Exit 141 where the Township of Union Summer Concert Series at Rabkin Park plays through July.

Their shows run every Thursday during July from 7:30 p.m. to 9:00 p.m. Concerts are open to the public and free. Bring a blanket or chair and sit and enjoy some very fine music.

The Rabkin Park field is large and well cared for. Parking and rest rooms are readily available. Compliments go out to the staff who handle the show. They were very helpful and very friendly as well.

To see the complete listing of concerts, visit the Township of Union website and go to their Annual Summer Concert Series page. On my visit, July 14, the band Foreigners Journey Featuring Constantine Maroulis played. 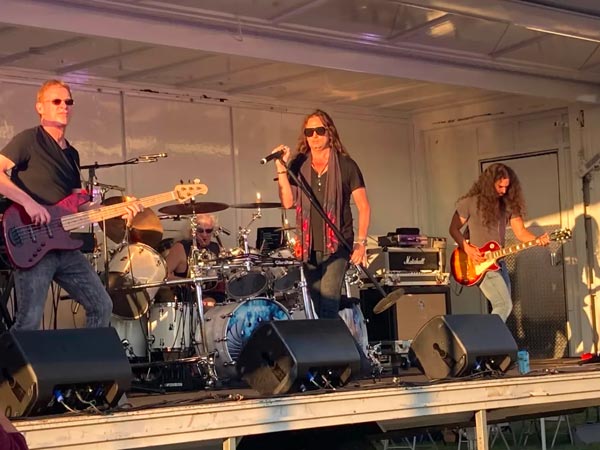 Foreigners Journey on stage – July 14 at the Township of Union at their Annual Summer Concert Series 2022.  Photo – K Nowosad

Originating out of Boston, Foreigners Journey covers hit songs from the bands mentioned in their name. This past year, New Jersey’s own Constantine Maroulis joined the band as their lead singer/front man. His inclusion brings additions to the set list from his hit Broadway show, Rock of Ages, and a few other rock classics as well as some tunes he writes.

One additional song on the set list was one written by Constantine. The song titled “Once in Your Life” is from his latest album, Until I’m Wanted. 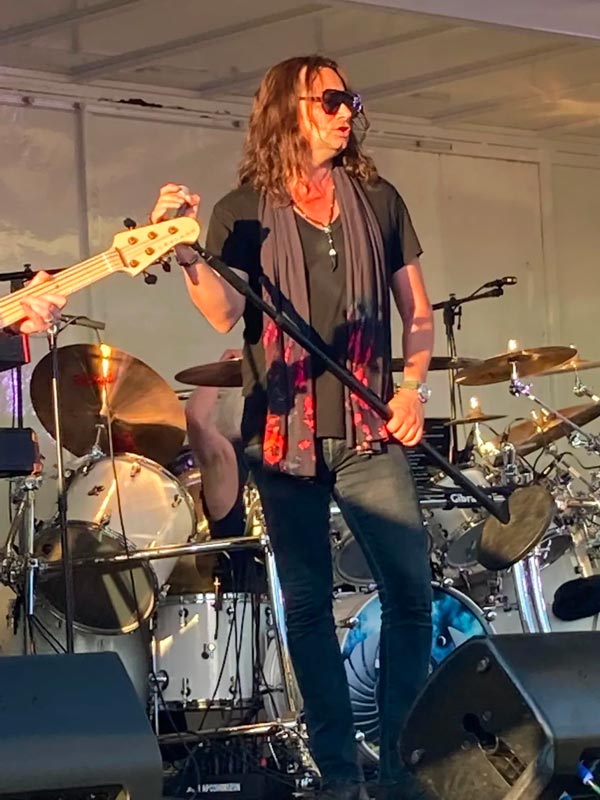 The people attending this show were really treated to a fine evening of entertainment. The 90 minute show was a songfest that people sang along with and cheered on.

The band member are very fine musicians. This includes Joe Pettengill (bass and vocals), Kevin Herrera (guitar and vocals), Adam Tese (saxophone), Art Mambuca (drums), and Paul Kochanski (keyboards and vocals). The sounds produced by this group are authentic to the era from which the music comes. It was obvious to see many in the audience reliving the joys of songs that have meaning connected to something in their lives.

Constantine Maroulis is the front man and he does one heck of job making sure that crowd is totally a part of the show. Constantine was a favorite when he was a finalist on American Idol. One of the reasons for that was his ability to connect with his audience. He continues that practice at his live shows by his connection with the band as well as the audience. Constantine further enhances that connection as he comes off the stage and walks through the audience as he sings. He is a first rate entertainer out to make sure the audience has a great time at the show. From what I could see, they did.

The 90 minutes went very quickly that night. Union tries to close off their concerts around 9:00 and so that hour was met. However, there were still a few of us that stayed for a few minutes to thank the band for great evening and many stayed behind to meet Constantine.

Leaving the Rabkin Park area, I found myself humming songs I heard that evening. It was definitely a very good time out that evening. The weather cooperated as it was a few days before the big heat wave came in. Yes, it was a perfect way to spend an evening outdoors in the summer.

Other Foreigners Journey Shows in NJ

Upcoming dates for Constantine Maroulis and Foreigners Journey in New Jersey include:

To see a full listing of all the group’s upcoming shows, visit their website.