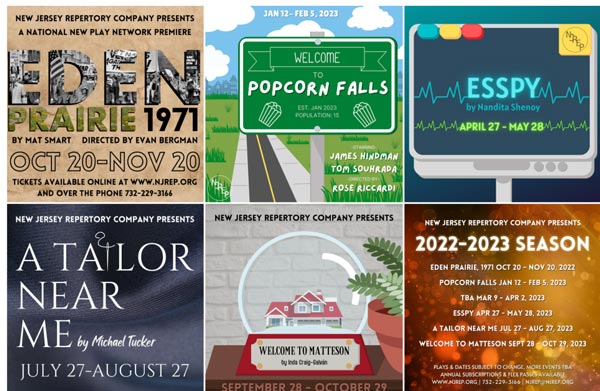 (LONG BRANCH, NJ) -- New Jersey Repertory Company has announced their 2022-2023 Mainstage Season. This season New Jersey Repertory Company will be presenting six mainstage productions - Eden Prairie, 1971 by Mat Smart, Popcorn Falls by James Hindman, ESSPY by Nandita Shenoy, A Tailor Near Me by Michael Tucker, Welcome to Matteson by Inda Craig-Galván and one to be announced.

Subscription options include the annual subscription (year-round) and flex pass (any three NJRep productions). Patrons can purchase tickets or subscriptions by calling NJRep at 732-229-3166 or from our website www.njrep.org.

The 2022-2023 production dates are subject to change. Due to high demand, some productions will be held over for additional performances. More events, in addition to the mainstage season, will be announced in the coming months.

Eden Prairie, 1971 by Mat Smart (October 20 - November 20, 2022) As war churns in Vietnam, night falls over the tranquil hills and creeks of a small Midwestern town, and a young woman hears a tap at her window. On the same night Apollo 15 makes its lunar landing, a young draft-dodger steals home to Eden Prairie, after a 300-mile trek from Canada. He risks arrest to deliver an important message to his childhood friend, Rachel. Both are caught between duty to the ones they love and their own futures. In a moment of national tension that mirrors our own, the young man must defend his choices and grapple with the sacrifices he has made. Mat Smart's stark, passionate drama skillfully questions our notions of bravery and responsibility.

Popcorn Falls by James Hindman (January 12 - February 5, 2023) Welcome to Popcorn Falls, a small American town whose only claim to fame – their namesake waterfall – has dried up. Now bankrupt, their last chance to save themselves is a large grant that can only be used if the town produces a play in a week. One big problem: no theatre. Another problem: no play. Led by the Mayor and the local handyman, the enterprising townsfolk try to rise to the challenge and prove that art can save the world.

ESSPY by Nandita Shenoy (April 27 - May 28, 2023) A medical student unlocks his own humanity via his interactions with a young actress who works as a substitute patient or 'esspy'. Through these encounters, he learns the part of medicine that can't be taught by books – how to care for patients with compassion.

A Tailor Near Me - A New Comedy by Michael Tucker (July 27 - August 27, 2023) A man goes to a tailor to have his suit pants let out because he's gained some weight since he last wore them. The tailor convinces him that what he really needs is a new suit, which leads to a negotiation, which leads to the making of a bespoke suit in front of the audience in four fittings, which leads to alterations made in both their lives.

Welcome to Matteson by Inda Craig-Galván (September 28 - October 29, 2023) A suburban couple hosts a welcome-to-the-neighborhood dinner party for their new neighbors — a couple recently (forcibly) relocated from Chicago's roughest housing project — and it's anything but welcoming. A dark intra-racial comedy about reverse gentrification and how we deal with the "other" when the other looks just like us.

The New Jersey Repertory Company was founded in 1997 by SuzAnne and Gabor Barabas. Its current central headquarters is the Lumia Theater located on lower Broadway in Long Branch, NJ. The theater's mission is to develop and produce new plays and to make a lasting contribution to the American Stage. NJ Rep has produced over 150 plays of which 125 have been world premieres. The theater has the additional distinction of having had many of its plays produced by other theaters around the country totaling over 200 subsequent productions in the U.S. and overseas. In 2012 and 2018 NJ Rep was the recipient of a National Theater Company Grant from the American Theater Wing that sponsors the annual Tony Awards for Broadway in recognition of its contribution to the repertoire of the American Stage. In addition, the theater has presented over 400 developmental readings.