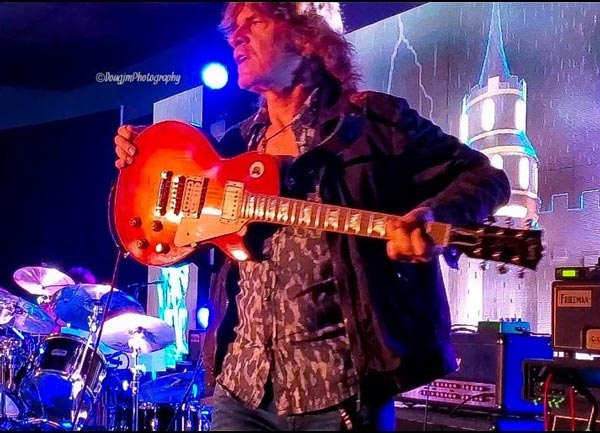 "Yes, we do, “Closer To The Flame" and it came out April 1st in Europe and on April 15 here in the States," said an enthusiastic Riot Act guitarist Rick Ventura as he discussed their new record which was born from the ashes of the past, affected by the present and the always unpredictable future of the industry.

The term "Metal" in and of itself has evolved since the blazing, crunchy guitar sounds of the '60s dubbed "Heavy Metal" came to be but the alchemy involved in its creation has managed to remain close to the original recipe; add guitar, turn it up and go full speed ahead. No matter who the "Alchemists" are, one thing is certain; you're going to get a raucous, straight forward, in your face piece of work which appeals to metal-heads of all levels and tastes.

"Closer To The Flame," is such an offering and Ventura explains just how it and Riot Act came to be.

“We started this a few years ago in 2019," he began slowly, "It initially started with my old friend Lou Kouvaris, he was the guitarist with Riot on the first album and we had been inducted into the Heavy Metal Hall of History in 2018; that could be wrong, I get the years mixed up especially with these last few years of craziness. Anyway, Riot was inducted and the band was finally acknowledged after so many years of being under the radar and Lou would call me up and say, “Hey, you know, we should do something, it may be the time to do something” and after that induction, I returned his call and said, you know, it just seems right; because there was always talk of Riot and this whole line-up and there was always something special about that period. Lou and I had never played together because I had come in on the second album, “Narita.” I replaced him after he left beginning with that album and we had never gotten to play together but you run into each other throughout the years and we were friends to each other so, we decided hey; why not? There were a number of other events that led up to this coming together but that's how it initially started. We got together and we played some old Riot songs and we just had a blast; it was so much fun just to play with him and our guitar styles really meshed and I was already playing with the current bass player and drummer Paul Raineri and Claudio Galinski and so we said, let's try these guys out, let's see how it works. So, we did it and it sounded quite good and we needed a singer and we had a friend who turned us on to our vocalist Don Chaffin who knew a few Riot tunes and was vaguely familiar with the band. So, we crossed our fingers and said, please let this work and he just belted out the songs and put life into them and we said, wow, this is just too good to be true; it's like an instant band and that's how it came about.”

With a renewed energy and vigor, the band was ready; ready to hit the road, ready to perform and ready to reclaim their spot on the metal map but the world had other plans, plans which stopped their agenda cold in its tracks.

“No, believe it or not no," said Rick when asked if they had played any live shows. "During the whole COVID period we really didn't perform. The only time before (The pandemic) was January of 2020 at the Heavy Metal Hall of History. We were asked to come back the following year and perform and we played two tunes and that was it and it was a blast playing because I finally got to play with Lou on stage and it was his only performance with this line-up on that show; it's on Amazon Prime and people can check it out if they’d like to see it. That was his last show and the only show we did and two months later Lou passed away from COVID; in fact, it's just a few months ago that it was two years since he passed away. We just stopped everything, so it was a very rough period and yeah, we're looking forward to playing again. We did the album, “Closer To The Flame” during that time period but we’re not going to be performing again probably until July. We are planning on going to England; we have August and September dates and also Spain. So, that'll be our first live performances in over two years so, it's gonna be kind of wild. We always had a good base in Europe from touring extensively back in the day and it's always been good. So, we’re going to go there first and then hopefully have some dates in The States in October and that'll be exciting to be back on stage again after being idol for all of these years.”

Ventura's tone turned somber when asked how the album came together but quickly became upbeat when he discussed its title, the songwriting and the "Bonus" that comes along with it.

“We decided after Lou passed away; I was really reluctant to do this and I had said no, that's it, it's just not meant to be because it was just too devastating for those first few months and then COVID hit and that led to a lot of personal problems and we were just idle for a few months. Then we got together and spoke and said, there is some good here and I had a lot of music in me that I needed to get out and I knew it was gonna come out sooner or later; we had the right combination of people to do it so, we started writing and I would do demos at home and send them out and it was an unusual process with everybody working from their home. We actually did a quarantine video and wrote songs on the drive so, yeah, it was really unusual; it was definitely unusual but we got the ball rolling and the songs started pouring out. So, I guess it was just meant to be, everything just came alive and we’re really proud of it.”

“A far as the title; well, you can look into it anyway you’d like actually,” he said with a laugh. "The Eternal Flame, people reaching for something; it can be taken a number of ways; it really wasn't meant to be anything specific; it’s the title track of the album and we thought it would be a good title and opener and everything just fit. It's 10 tracks, 10 new tracks and a bonus 12 track CD of old Riot tunes from the first three albums; that’s how it initially started. Lou and I, we were asked to do a six song EP when we first got together and when the band first started people wanted to come hear us; OK, what are these guys about? So, we did that to show them yeah, you know, we still have it (laughs) and it turned out really well and it was crazy recording those songs again, having them re-energized with modern technology and they just sound really, really powerful. So, that was fun and it's cool and what's nice about it is that Lou is on there and the fans will get to hear Lou and I play it together; so, it's kind of tribute to him. The Majority of the tunes were written as a band collaboration. Don Chaffin does the vocals and lyrics but in this band, everybody contributes; in bands there is always one member that has a vision but you always want everybody to feel a part of it and contribute something to it. So, at the end of the day there is going to be one or two main writers and that’s just the way it is but we are very flexible and everybody is open minded and willing to listen to each other.”

Armed with the new record and several corresponding videos the band heads across the Atlantic and hopefully will be tearing up the stages here in the U.S. as well; so, what happens next? Ventura says they have no plans of relaxing.

"After the dates in Europe; for a while there were dates available and then tours were cancelled because of COVID so, it's been really rough but it looks like it's really happening in August and the dates are starting to come in slowly. We already have another album in the works and we’re gonna start working on that because our attitude is, let's get this work out because we have a lot in us and a lot that I want to get out there, a lot we all want to get out there and secondly, we want to show that it's gonna be great! We’ve been working on videos for our new material and they are due out and yeah, we’re looking forward to seeing where we can go with this project.”

To discover more about Riot Act or to purchase "Closer To The Flame,"  please visit http://riotactband.com/.