A Summer Delight - "Much Ado About Nothing" 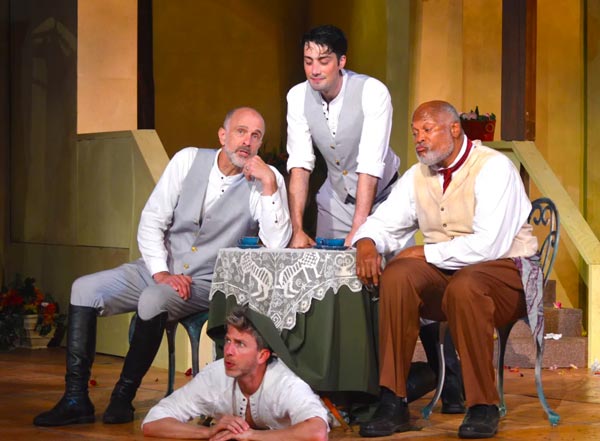 When summer arrives, outdoor theater beckons to us. The Shakespeare Theatre of New Jersey (STNJ) traditionally runs a play a year outdoors. This practice which started in 2002 continues this year with Shakespeare’s Much Ado About Nothing. Bring your blankets, low back chairs, and picnic dinner to the Outdoor Theatre on the campus of St. Elizabeth in Convent Station. The Greek-style amphitheater has a charm all its own as patrons can enjoy an outstanding production.

Much Ado About Nothing is a comedy. It is appropriate for ages and it provides a wonderful introduction to Shakespeare for younger theater goers. The performances of this show run until July 31st.

A Comedy but More

Much Ado About Nothing is a light heated play but one that also shows the dangers of rumors and innuendos. It takes place in Messina, Italy. The setting has a bright stage with a summer-like glow to it.

As groups of soldiers arrive in town, romance is in the air. Led by Don Pedro, Claudio and Benedick are the two men who have different notion of love in mind. Claudio has long been in love with Hero. As he returns, his feelings are rekindled. After a few missteps, the two plan to marry.

A ball is held complete with music and dancing. STNJ does of fine job of choreography in this scene which is a nice piece to have in the show. Benedick dances with Beatrice who is a cousin to Hero. This is an interesting pairing because Benedick is a confirmed bachelor and Beatrice ya confirmed spinster. However, they engage in interesting conversation which of course leads to feelings of love.

All seems on course until a malicious plot is hatched to deceive Claudio. As the plot develops, all sorts of antics are on stage. The “hiding in plain sight” to listen in, so popular in Shakespeare plays, happen. And in doing so, misunderstandings occur. Finally, Claudio tells Hero he will not marry her because she has been with other men. The news is so severe that Hero faints but the crowd thinks she is dead.

Benedick defends Hero’s virtue eventually exposing the untruths. This leads to Beatrice declaring her love for him. Claudio comes to Hero to claim their love and all ends pretty well.

We would be remiss not to mention the very funny actions of the town guards, led by Michael Stewart Allen as Dogberry, His actions warning the audience about aircraft overhead and then his attempts to harness his guards to do their duty provides a lot of funny scenes in this show.

So What is the Much Ado About Nothing ?

A unique paring of words but ones that really summarize the point of the play. The rumors and untruths about Hero have no sound basis so it is nothing. But much is made of it. Enough to generate much of the play.

As always, I find the themes in Shakespeare’s plays continue to have relevance to the current day. Today, we see conspiracy theories based on nothing substantial. But they do stir things up. For those who subscribe to their preachings and base action around them, are they also not making much ado about nothing?

Much Ado About Nothing Features a Large Ensemble Cast

Eleanor Holdridge directs Much Ado About Nothing. The production features a large cast with an ensemble of 23 actors. It includes many familiar STNJ veterans along with members of the 2022 Acting Fellow Company.

Leading the cast in the iconic roles of Beatrice and Benedick are Broadway veterans Benjamin Eakeley and Jesmille Darbouze. Other leading roles are played by Michael Stewart Allen as Dogberry, Raphael Nash Thompson as Leonato. Richard Bourg plays Antonio and Verges, James Michael Reilly as Don Pedro, and Fiona Robberson as Hero.

To Attend the Show

For more information about The Shakespeare Theatre’s Outdoor Stage performances and its inclement weather policy, please call the Box Office at (973) 408-5600, or visit ShakespeareNJ.org.

PHOTO: A scene from Much Ado About Nothing from Shakespeare Theatre of New Jersey – James Michael Reilly, Benjamin Eakeley, Christian Frost, and Raphael Nash Thompson. Photo by Sarah Haley