(ATLANTIC HIGHLANDS, NJ) -- On December 1 at 7:45pm, the First Annual SModcastle Film Festival presents a block of films that include Lady Betty, Waimea, and Who Dunt Dunt Dunnit. The festival takes place at Smodcastle Cinemas in Atlantic Highlands.

Lady Betty - In a cosy corner of a country pub, two old friends wile away the evening trading tall tales. Soon they begin telling the story of Lady Betty, the first and only female executioner in Ireland. As the men talk, we are zipped back to the late 1700s, to a lonely shack on the edge of town where Betty Sugrue – Lady Betty – and her son Padraic eke out a meagre existence. Told through Paddy and Mick’s… distinctive style of storytelling, which mostly involves constantly interrupting each other and arguing, we see and hear about the hard and twisted life of Lady Betty.

Waimea - Rick and Vivian are a couple struggling with a very unique test to their marriage.

Waimea is by Jersey Shore filmmaker Steve Herold, who has been working in film and television since graduating from the film program at New York's School of Visual Arts. His award-winning films include H.R. Pukenshette, Bum Runner, and Death Of An Umbrella Salesman. In total, his films have screened at over 75 film festivals worldwide.

The film stars Kevin Kollack and Patricia Damon.  The cast also includes Charley Tucker, Ronelle Thomas, Dan Truman. It's about a man who forgets where he hid his winning lottery ticket and a wife who is quite a bit upset that he lost it.

New Jersey Stage spoke with Herold in 2020 when the film began its run on the festival circuit. That interview is available here. 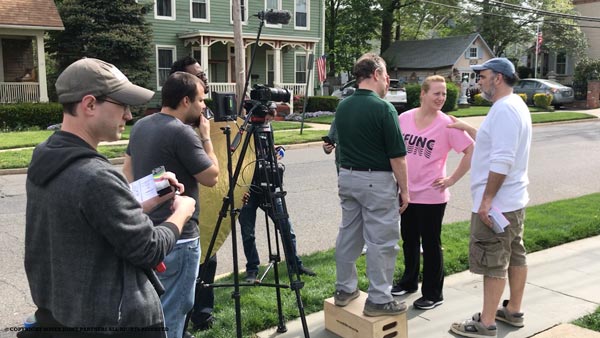 The First Annual SModcastle Film Festival comes from From Kevin Smith & Friends. This is a Central Jersey showcase of cinema hosted by the guy who made Clerks once and held at the very theater where clerks auditions once took place, Atlantic Moviehouse aka Smodcastle Cinemas. Welcoming entries from all over the world, the SModcastle Film Festival will be a week-long Fall event filled with features, short films, animation, documentaries & more.