(LAKEWOOD, NJ) -- Howell PAL Theater Company’s sensational, summer musical is all about kids of all ages and sizes becoming extraordinary superheroes who learn they can write their own story, and be empowered to change the world around them. Matilda, the Broadway Musical is a joyous, uplifting story of a courageous girl who, armed with a vivid imagination dares to take a stand to change her own destiny. Inspired by the twisted genius of author Roald Dahl, with book by Dennis Kelly and original songs by Tim Minchin, Matilda has won 47 international awards and continues to thrill sold-out audiences of all ages around the world.

Matilda is presented by special arrangement from MTI (Music Theater International) on September 9th at 7:30pm and September 10th at 2:00pm at the Historic Strand Theater (400 Clifton Avenue) in Lakewood. Tickets are available for purchase online.

Matilda, (played by 6th grader, Kylie Ferland) is a brilliant bookworm who escapes the horrors of her cruel and zany parents Mr. and Mrs. Wormwood, (played by sophomores, Cooper Stahl and Kayla Brown). With the kind support and reassurance of the school’s librarian, Mrs. Phelps (played by senior, Giada Garcia), Matilda finds comfort in the imaginary world of books.  Matilda impresses her schoolteacher, the highly lovable Miss Honey (played by sophomore, Adysson Fazio) and over the course of her first term at school, Matilda and Miss Honey have a profound effect on each other's lives. Yet, all good superhero stories need a despicable villain. The young students of Crunchem Hall must deal with the child-hating headmistress Miss Trunchbull, (played by college freshman, Brian Beehler in Friday night’s performance) and (college freshman, Aidan Panno in Saturday’s performance) who loves thinking up new punishments for those who don't abide by her rules. In true Roald Dahl fashion, the circumstances go from bad to worse. 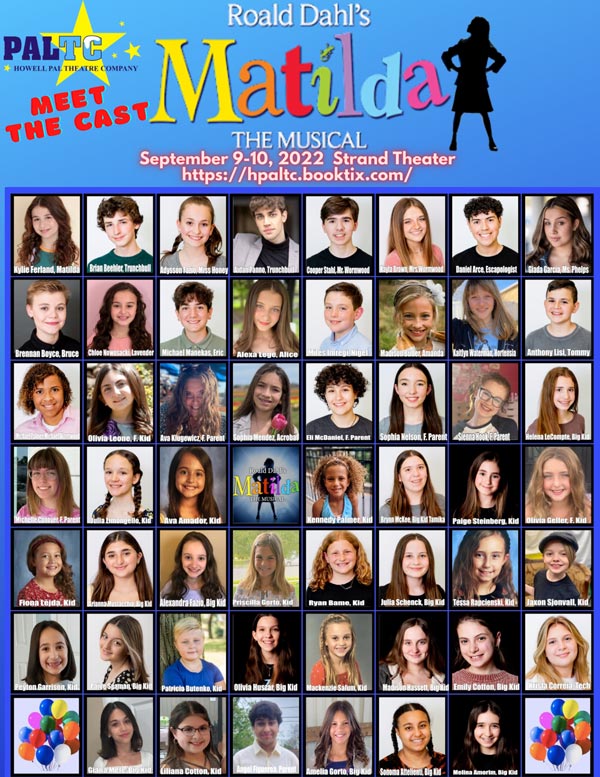 Howell Police Athletic League Theater’s Artistic Director Gillian Bryck is proud to present a full-scale Broadway musical for our Jersey shore communities to enjoy.  “Our cast of 52 young actors, ages 7-18 have been working long summer hours, four-times a week learning difficult songs and choreography. This will be a treat for audiences to see.”

Since 2011, the Howell PAL Theater Company has been bringing educational and unparalleled quality theatrical performances to the Monmouth County area, under the direction of Mrs. Gillian Bryck. With the guidance of the Howell Police Athletic League, the company’s mission is to inspire, educate and challenge young people with extraordinary positive musical theater experiences. With a foundation of encouragement and trust, participants learn to explore their creative and artistic talents.

Each season, the PALTC produces full Broadway musicals featuring a teen summer show and a Broadway musical for people ages 6-21.  Students get to experience the joy of theatre, while also learning what it takes to be an actor.

The Howell PAL Theater Company, is a non-profit theater company that relies on donations, sponsorships and fundraising for people to participate in all PAL theater programs.