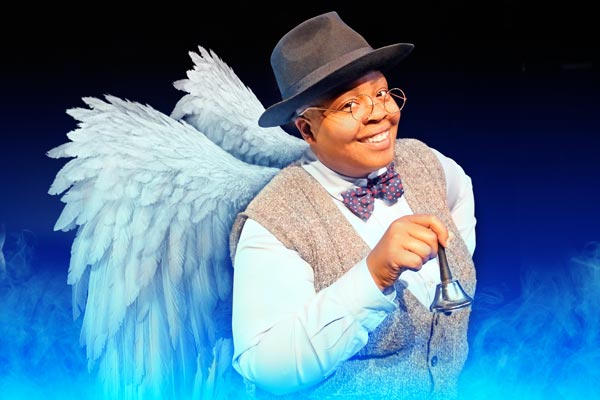 It’s hard to imagine a discussion about Christmas movies without including It’s a Wonderful Life.   The iconic holiday film starring Jimmy Stewart has been a staple on television stations for decades.  One mention of the film likely brings up images of your favorite scene or two, but do you remember how the entire film goes? Could you imagine being on stage, retelling the entire story, while keeping each character in a separate voice?

That’s the challenge for Erica Bradshaw who was cast in This Wonderful Life, a one-person account of the film by Steve Murray being presented at Luna Stage from December 1-18.  Bradshaw has done one-person shows before, including one (White America Hero) that she wrote herself, but taking on the town of Bedford Falls is unlike anything she’s ever done before.

“I thought it was crazy!” said Bradshaw when first presented with the idea.  “Crazy and interesting and something I wanted to do.  I was intrigued by the opportunity.”

If somehow you have never seen the film, here’s a brief description: The film tells the tale of George Bailey (played in the film by Stewart) who has bottomed out.  He’s a man that gave up on his own dreams to work for his father’s savings and loan company.  When the film begins, we see him contemplating suicide on Christmas Eve only to be “saved” by his guardian angel who gives him the gift of seeing what would have happened to his town and the people he knows if he had never been born.

Bradshaw admits she was never a big fan of the film until tackling this project.  But she is beginning to see why it became such a holiday tradition.  In addition to portraying all of the characters in the film, she also plays the narrator — offering the perspective of someone retelling a story by a campfire along with heavy dash of snark along the way.

“I think the narrator really loves this film,” said Bradshaw.  “And also sees the flaws in it as well.  But its universal story is about the value of life and how we all get to where we are that man on a bridge alone on Christmas Eve; and all we have to do is shift our perspective and see how wonderful life actually is.”

She says she is very good with voices and between the voices, costumes, and direction by Daryl L. Stewart, she will bring the story to life.  Her biggest challenge leading up to the role is time.  She’s not just preparing for one role, she’s preparing for every role while also working for NJPAC, Luna Stage, Two River Theatre, and Link Community Charter School.  She teaches theatre, creative writing, and has a Poetic Justice residency.  In other words, she’s quite busy.

“There’s so much universality,” she continued. “George’s big thing is that he just wants to leave town.  He has this dream from a little kid and how many of us are fortunate enough to be doing our dream? Things happen and stuff changes.  I think it’s about having the dream - the hunger for the dream and then not getting the dream but finding out that life is still pretty good.” 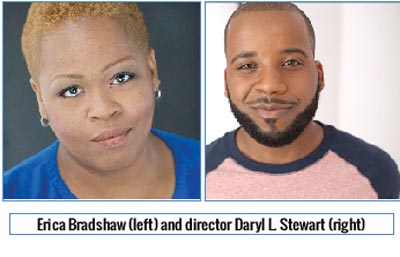 Bradshaw is one of the fortunate few to be living her dream.  From the age of five, she says she knew she wanted to be an actor and singer - a statement caught on video by her uncle.  Acting and singing, along with teaching fine arts, is what she does.  But Bradshaw knows how fortunate she is and how difficult it is for people to see their dreams come true.  She can understand how people get to the point in which they are on that bridge.

“There’s still a journey to figure out who you are,” she added.  “I think that’s what all of our stories are always about.  We’re all trying to figure out who we are - especially at the holidays. We want to try to be our best selves and be grateful for all we have, and sometimes it’s hard to see that through all the bills and the taxes and the politics and whatever else is going on in the world.”