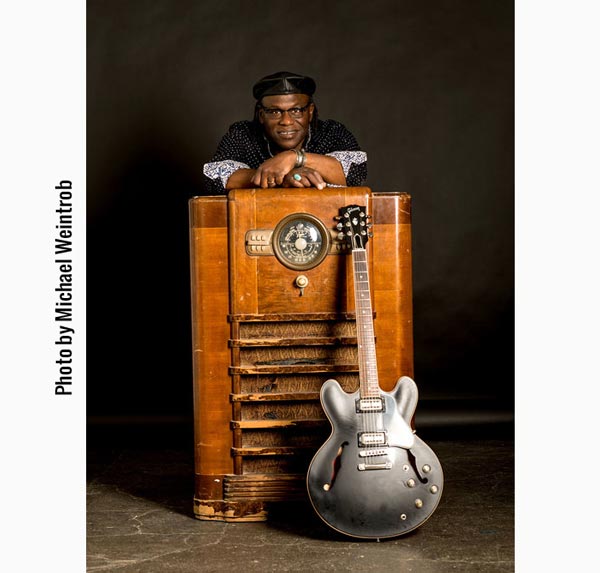 "That whole album was made in Muscle Shoals with the Muscle Shoals band; The Swampers. The same guys that played with everybody from Aretha to Lynyrd Skynyrd to the Stones with Roger Hawkins on the drums, David Hood on the bass, Jimmy Johnson was alive then on the guitar, Clayton Ivey on keyboards because Barry Beckett had passed; Steve Cropper co-produced it with me and yeah, we had a blast making that record because that was a great band."

"The Preacher and the President" was released in 1998 by blues great Joe Louis Walker and as one can read above; Joe doesn't mess around when it comes to recording his music. Truly getting by, "With a little help from his friends," he's used the pandemic down-time to finish a new album, to continue honing his craft and waiting patiently for things to return to somewhat normal; aka, live gigs.

The new album is still untitled and is due out toward the end of summer or early fall and once again, much like 2020's "Blues Comin' On" Joe employed his rolodex, oops, I mean contact list to contribute to its recording.

"Most of the time, it's people that I know. On "Blues Comin' On" I have not only Dion and Eric who I've known since I was about 15 but I also have Keb Mo, John Sebastian, Carla Cooke who is Sam Cooke's daughter on two of the tracks, David Bromberg, Jorma Kaukonen, Albert Lee is on one song; there's quite a few friends on that record. So, when I choose people to be on my records, it's usually someone I know, somebody that I have worked with, somebody that Lappen may have recommend; be it a female singer or a different guitar player. He'll send me two or three things and I'll listen; so that's basically how it works for me."

"Dion sang the first part of that song and then I sang it and then Eric Gales played lead guitar and Waddy Wachtel is on there too, he played acoustic guitar; it turned out pretty good," he said with a hearty laugh as he discussed the title track of that previous album while re-affirming his inner circle of, "Friends." "On this new record there are 11 songs, I'm thinking of calling it "Electric Eclectic" because it's pretty eclectic," he laughed once again. "It's got different things because people ask; what would you sound like doing this one? I wonder what you'd sound like if you did that song? So, I did a few songs that people asked me to do and I have some new original material on there; we're hoping that people enjoy it. Waddy is on the record of course and I did Waddy's song, "Werewolves Of London" and I did it really, really funky. I have a great young lady named Betty Miller from Harlem and she sang a track with me; she's on the Wolf Record label; she is a great singer. John Lappen listens to all of these up and coming artists and I told him I needed a female singer for a song called, "Lady In Red" which was a song that a friend of mine had wrote in the 1960's and we recorded it in 1970; I think it was when I was living in California. I wanted to do it as more of a guitar driven song with the woman and the man going back and forth; so, I Googled her and listened to some of the things that she's doing and she sounds great; definitely an up and comer. I met Juma Sultan at Woodstock the great percussionist who played with Jimi Hendrix; this is the second record he is on. We haven't picked the exact date for release; we haven't finished the art for it yet but it's mixed and mastered and all of that stuff; it needs two or three months of lead-in time before they release it. So, I'm thinking late August, September, somewhere around there."

Recording this record wasn't all he was doing to keep busy over the past year; sometimes those friends need help too and Joe is always willing to oblige because after all; he feels the closeness of being a working musician and knows the effort it takes to maintain the level of professionalism needed for a cohesive unit; especially after having most of the year off.

"I've been finishing this record which should be out some time in August or September as I said and I've worked on quite a few other people's records that were released. I was on Dion's record and there are some that haven't been released yet; I was trying to keep busy musically even when there wasn't that much to do. I was trying to keep my chops up when there wasn't that much to do; I'd go downstairs and play a little bit in my basement. I'd play a little guitar, little bit of piano, little harmonica; music is such an organic thing which most of the time you do with other people (laughs). That's the joy of it, I know a lot of musicians who are friends of mine who say they go down and play twice, three times a week but it's not the same."

"What we do is inspirational; you can if you want to but people will notice immediately if you think you're gonna just dial it in. This really is give and take with the people that you are playing for; a group is like a ball team; you go into a different town and you grab each other and try and lift each other up. Somebody may have a cold that night and maybe they can't sing their part and you make compensation for it and that's the stuff that brings groups together and to be honest that's how you find different things; that's how you find your sound in a way. You make a mistake or something is missing and it comes out in what we are doing; it's like if you are a singer; what is it about the voice? The voice is a muscle and if you don't exercise that muscle and just go out and start singing the way you would normally sing; you're going to blow your voice out. You've got to work your way up; one of the things that I do when I'm at home is try to get down and force myself to sing. Believe me, I know for a fact that everybody who sings for a living, the hardest thing they have to do is to get in and try to sort of make it seem like they are singing in the same type of situation as if they were singing for an audience of people. It is really hard to take that and sing for nobody as if you were singing for 1,000 people; there's no substitute for that (laughs). There's no substitute for 1,000 people, there's no substitute for 100 people. So, you've really got to visualize and get in there; depending on what kind of music you're singing and what your voice is but it's like when you play guitar; your arm is the muscle. Your elbow, your wrist, your niche, the way you holding your chords shredding as they call it; you know what? If you've not shredded in about a month and a half, you might get a cramp and that could be pretty embarrassing but it can happen to the best of us. So, I can totally relate to getting back up on the horse but the horse has still been galloping every day and going on and you ain't! You have to get used to how you're gonna gallop and how you're gonna try and lead the horse; it's something that you just can't dial in, it's physical and mental."

Well, Joe's patience and perseverance has paid off and the dividend is arriving in the form of some live gigs complete with audiences; two of which are in Marlboro, NY and Sellersville, PA early in the month of May. Walker is ecstatic to be performing at a larger venue but but he realizes that things could change in a minutes time; let's say he's cautiously optimistic.

"I just did a little gig here at The Town Crier in Beacon, NY; me and Murali Coryell did an acoustic duet and that was recently. I have my band and I, we are going to be at The Falcon on May 7 in Marlboro, NY; an outside show and then we are going to be at Sellersville Theater on May 8; both limited capacity shows but it's good that the theater is trying to bring some live music to the folks. I've got some other gigs in June and some coming up in July but the only thing about gigs in the COVID era is that if a municipality has an outbreak then everything changes. It doesn't make any difference if it's two minutes before the show, if there is something going on and then everything has to adhere to CDC guidelines; a lot of shows have been pushed back three, four, five times because there were outbreaks in different areas. It's hard to make concrete plans but as we go on, it seems to be going hopefully in the right direction where we can get some live music back."

"We've played outside and we did a couple of things for the Tupelo Music Hall up in New Hampshire," he went on, "That was an outdoor show but quite a while back. We did another in Plattsburgh, NY and those went pretty well but to do an inside theater? There's not a lot of people doing them. Sellersville is a big theater but as far as things getting even half-way back to normal; I don't think we are quite there yet."

Walker says even with the lack of on-stage hours that, "The show is usually around 90 minutes but it will end up being a couple of hours," at Sellersville Theater so, if attending just know that Joe and the band are looking to deliver an evening of solid blues and rock 'n' roll music. So, what is on the tune menu? Any new songs from the next album?

"We'll probably play a song or two off the new album but we'll be doing some songs off of my previous albums; I've got 30 (laughs). We'll definitely be doing some off of "Blues Comin' On;" we like that song and we do a pretty good version of that song; different things that we have been working on. Everybody is just chompin' at the bit to play and perform for people so, it should be a good night."