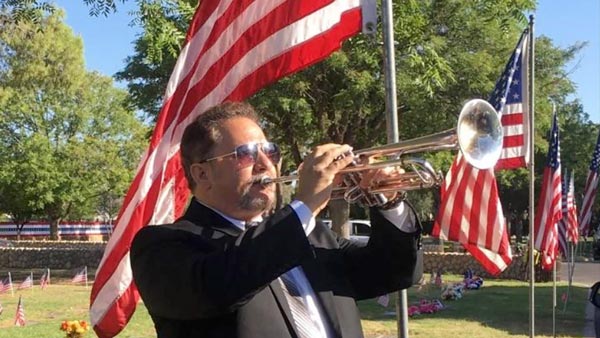 "I played the trumpet before the drums actually," says Trixter's Mark "Gus" Scott as he discussed the release of his new holiday disc titled, "Christmas Miracle." "It's seven songs, so I guess it's more of an EP. I did it because, well, everybody in the band kind of took off and started doing other things and I still wanted to play with Trixter. I had been doing music for video games and a movie and then I was watching an episode of, "The West Wing" and there were these hit men committing a murder and there were flashes to a lonely little boy singing in a Church during the murder and he was singing, "Ave Maria" and I had a thought...."

That thought was to cut a single of that same tune but Scott wasn't sure how it would come out or if it was even worth his or anyone else's time. So he enlisted the help of his producer and set out to record what he thought at first might be just a single. "I recorded half the song because I didn't want to take the time to do the whole thing just in case it wasn't happening as I'd hoped; I didn't want to waste anyone's time, including mine. So I recorded half of the song and when we played it back, we were both like, "Wow!" "So it was suggested that I finish the song and not stop there. I was told that I should make a whole album and I thought; why not make a Christmas album? Christmas songs are some of the most beautiful music ever written, so I did it and I'm very happy with it. The rough part was the production (Laughs). This was like mixing classical music, like an orchestra. I had 50 different things recorded individually so it was a nightmare to mix and master; the production side was really wild! I had a lot of fun doing this record. I had the time and really had only a few other things going on and I like being on stage and beating the drums and that's great and I love doing that but I'm really proud of this; this one was for my parents (laughs)!"

Even though he released, "Ave Maria" as a single earlier in November, the rest of the disc was released on Thanksgiving and was done so for a couple of reasons. "I released the single early because it benefits a great charity called, "Hope 4 Kids International." "All of the proceeds from this single will go to the charity. I've been very lucky to live my dream life and I want to help kids all around the world have that same opportunity. Now as far as the CD goes, I'm tired of seeing Christmas being shoved down our throats before Halloween (Laughs). I think the commercial markets are now pushing Christmas too soon. When I was a kid, you didn't even think about Christmas until after Thanksgiving, so that's why I'm waiting until Thanksgiving to release the album because I don't believe in rushing things. I think we need to return to some older values a bit and stop hurrying to get there."

The word, "Philanthropist" is often attached to Scott's name and has even become somewhat of a moniker for him. However, he feels like he's the one who is on the receiving end of things and takes nothing for granted. Every Memorial Day and Veterans Day he can be found playing, "Taps" at a local cemetery or present at an event honoring our war heroes. His desire to, "Give back" and repay those who served our country is forever ongoing. "It is an extreme honor to perform at those events," he stated with a sense of awe in his voice. "Even when Trixter would play at military bases or near towns that had bases, they were some of the most or perhaps the most appreciative crowds we ever performed in front of. Anytime I'm asked or anytime that I can volunteer to do a veteran's ceremony, be it in a cemetery, a VFW or wherever; I'm gonna do it! Sometimes they offer me cash or ask who they make the check out to and I'm like; are you kidding me? I should be paying you! These guys and women gave their all, some did give their all and I feel so humbled and proud to be asked to do that for them, I can't take payment."

"There's nothing happening with Trixter right now and this album all came about because of that. I'm doing this because it developed from me not doing anything (Laughs). When you reach a level of success, maybe not even success so much as just being a musician, you hope to connect with just one person. Just one makes it all worth it and knowing that you, your talent or music has affected their lives in some way makes it a success and is quite gratifying. Now, with this album and the veterans that I encounter, the situation is reversed. Now I'm the one being connected with and it's so cool. These people that I meet and speak with are telling me stories and I'm honored to have met them. They're leaving their impressions on me and making memories for me and I'm lovin' every bit of it!"