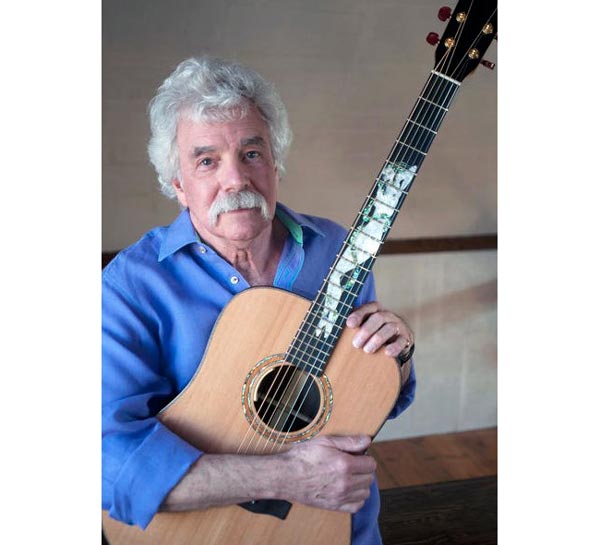 Words such as “Gifted” and “Influential” with a “Warm expressive voice” have been used to describe Tom Rush. Artists like James Taylor and Garth Brooks have listed him as one of, if not their top influence and he will be appearing at The Sellersville Theater in Sellersville, PA on Saturday November 13 at eight o’clock p.m.

Rush is credited with helping “Shape” the folk revival in the 1960’s and “Revitalizing” the genre in the 1980’s and ‘90’s as well as aiding the careers of artists such as Joni Mitchell, Jackson Browne, Nanci Griffith, Shawn Colvin and the aforementioned Taylor. When asked about his effect on these now iconic performers and his role in their success; he tends to downplay his involvement; tending to focus on what is happening in the present.

“The fact of the matter is that I wasn’t looking to discover anybody or in promoting anybody else’s career; I was looking for songs to record and of course wanting to meet girls. That’s the other main incentive for being a musician if you’re a guy and anyone who tells you different is lying,” he said with a laugh. “I’ve got a new album’s worth of songs but the studios in Nashville are shut down. I might actually just record a new album at the kitchen table; make it very informal. My kitchen table is actually set up; during the pandemic I’ve been doing this online series called “Rockport Sundays” where every Sunday I put up a video clip of a song and a story and they’re very often brand new songs that I haven’t recorded yet. So, the kitchen table not only has pro recording gear but it has pro video gear. I could do a video album; hmm, interesting idea.”

By his own admission, Rush acknowledges his status as an elder of the music tribe but he also has no intention of slowing down and his tour schedule is still very active. The road however, can be taxing even for the more youthful but here too, he doesn’t allow the rigors of the road to detract from his performances.

“I had three shows in the Northeast last weekend, then I’ve got four in a row in Richmond and Williamsburg Virginia and Sellersville, PA and then the following week we go to Clearwater, Florida and do a show with the band America and then after that I go to Toronto and do a couple of shows with Gordon Lightfoot. So, every weekend is pretty much jammed up and in this particular case it’s kind of exciting because I get to play for live audiences which I’ve been missing terribly. One of the things I’ve learned from doing these “Rockport Sundays” thing is that when you tell a joke for a video camera it doesn’t laugh. So, all of that thunderous applause is wasted because I can’t hear it; getting in back of real live audiences is a real treat. That said, I’m not 35 anymore, I sometimes feel like I might be even 50; I love the two-hours on stage but the travel part gets older every day. I just did five shows in a row out in the mid-west with 1,200 miles of driving; that kind of wore me down but It’s me and my guitar and most of the time Matt Nakoa who is my uber-talented side-man who does a lot of the driving. We flew out to the mid-west, rented a car, drove the 1,200 miles, turned the car in and flew home.”

“Our first set actually runs about and hour and ten-minutes which is longer than some people’s shows; we take an intermission and do another hour. The nice part is that people tell me they wish the show was longer. Every show is different, I know what I’m going to start with and I know what I’m going to close with but in between it is kind of free-form. Yes, I’ll definitely be doing some favorites from over the years because that is what people come to hear; they come to hear what they know but I’ll be mixing in some brand new songs that I think are some of my best work and the crowds have been very enthusiastic about the new songs and that’s great.”

Rush can not hide the enthusiasm in his voice when he discusses Nakoa but had it not been for a persistent friend; he never would have encountered him.

“I found him when I was doing a show at Symphony Hall in Boston and I had guest artists coming and I wanted my guests to learn the new songs. I was borrowing a studio from a friend who has a studio in his basement and I’m down there working on these demos and he says, “Do you want any keyboards on anything?” I said, no and he said, “I’ve got this kid here and he’s really good” and I said, no and he said, “He’s really, really good” and I said, OK, alright, I’m getting the studio time for nothing so, OK, one song. He went upstairs and woke up Matt who said, “Tom who? No, I want to sleep, get outta here.” Well,  he finally managed to drag him downstairs and he played on one song and then he played on another song and then he played on all of the songs; he’s gooooood. Then at the end of the afternoon, I asked him if he would like to do a show with me on December 28 and he said maybe his calendar was free and asked what club it would be and I said, well actually it’s Symphony Hall. There was a moment of silence and he said that he probably would be able to make it (laughs). So, he was part of the band at the Symphony Hall show and a month or two later I called him and asked him if he’d like to do a concert or two with me and we’ve been working together ever since.”

The pandemic which spawned those “Rockport Sundays” shows wasn’t necessarily kind to Rush as he fell victim to the virus himself which affected him physically but didn’t dampen his spirit.

“Yes I did have it and I do not recommend it! I was an early adapter, I got COVID in March of 2020 and it was two weeks of basically feeling really crummy. It was five days of getting worse, five days of being in bed 20-hours a day aching all over and being exhausted and five days of getting better little by little. After it was over or I thought it was over, they put a pacemaker in me because they discovered my heart-rate was going down to 23 beats per minute. I think it is COVID related because when I was in the cardiac ward at Mass. General a nurse said, we seem to have a lot of COVID survivors; this was early in the pandemic when not many people had gotten the virus yet. So, the fact that we were over-represented in the cardiac ward indicates to me that it’s COVID related but I can’t prove it.”

So, what can we expect if we are going to The Sellersville Theater on Saturday?

“Some old songs, some new songs, some stories; Matt Nakoa will be doing a few songs on his own during the course of the show besides being my accompanist. He always steals the show and I pay him to do it; I don’t know what is wrong with me (laughs). He’s a monster, my hope is that when he is playing stadiums that he lets me open the shows

After such a long and storied career, surely there has to be some takeaway. When asked if there is anything he may have done different he says he has no regrets.

“I’m sure there are several managers that I wouldn’t have hired; I probably would’ve stuck to business a little more and partied a little less. I’m very happy to be where I am and appreciate the path that got me here.”

That's it for this week! Please continue to support live and original music and until next week....ROCK ON