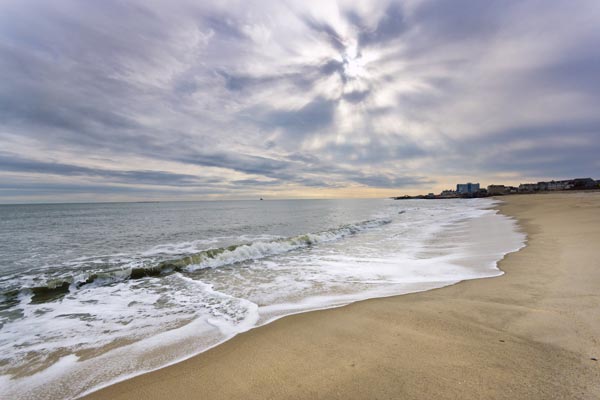 Monmouth County lies an hour and a half drive from the heart of New York’s theatre district.  Nestled in Central New Jersey, it is home to Two River Theater and New Jersey Repertory Company.  These two companies are building a solid reputation among the theatre world for producing original work and developing relationships with playwrights - a combination that is changing the way many think about regional theatre.

Madeleine George is a New York City playwright and Pulitzer Prize finalist for The (curious case of the) Watson Intelligence.  She was pleasantly surprised when she first encountered audiences in Monmouth County. Her first experience with Two River Theater in Red Bank was Seven Homeless Mammoths Wander New England in 2011. Returning years later as the Mellon Playwright in Residence, she decided to learn more about the people coming to the theatre.

“I am more and more impressed by how friendly, curious, and game the audience is at Two River,” said Madeleine.  “There are a lot of regional theatres where the audience isn’t hungry for new works, but I noticed that this audience comes out for all of the events that surround the plays.  It’s not like they just come out because it’s winter and they have to come out to see The Christmas Carol like they do each year.  They come out to see panel discussions and the season announcement and to the block parties.  To me, it is very impressive how engaged this audience is in the theatre.”

Despite its location, a large portion of Monmouth County works in New York City.  Many choose to live in the area to be close to the Jersey Shore or to find homes less expensive than the North Jersey suburbs.  But they are no less cultured than New Jersey residents who live just across the bridge.  Theatres like Two River and NJ Rep are discovering audiences who have the option of going to a Broadway or Off-Broadway show each weekend, but who sometimes prefer seeing professional theatre in their backyard. In this way, they may be changing the role of regional theatres that are located in the shadow of the city.

“It didn’t occur to me that that’s the decision people are making,” Madeleine added.  “That at any time, if they wanted to they can go see The Lion King or something.  It helps me to understand the richness of that environment because people are doing the same thing they would do in the theatre capital of the world except closer to home.”

Meanwhile, about six miles away in Long Branch is the New Jersey Repertory Theatre Company.  While Two River Theater presents revivals and rarely seen works in addition to their world premieres, NJ Rep presents new work exclusively.  Since 1997, the company has produced over 100 plays, most as World or New Jersey Premieres, with many moving on to regional theatres across the country and stages in New York City.

In recent years, the industry has begun to notice the tiny theatre in Long Branch that thrives on the challenge of producing new plays.  Actors like Michael Tucker (LA Law) and Dan Lauria (The Wonder Years) have starred in their own works presented at NJ Rep.  While having stars on stage help enhance the theatre’s profile, it is relationships with playwrights like Gino DiIorio that have led the theatre to thrive as a home for new works.  Gino’s latest play, The Jag, is his fifth to be produced at NJ Rep.

“We’ve had a great relationship,” said Gino, who like Madeleine is a playwright based in New York City.  “Not only do they do nothing but new work, which is hard enough, but they take risks on plays that nobody else would do.  The dirty little secret about plays is that theatres will often do development readings and do commissions.  They’ll say we’ll pay you a certain amount of money if you develop a play. They will do readings at the theatre, but at the end of it they don’t produce them.  They’ll say we gave you a little money to develop it and now we’re going to do a more established play.”

“New plays are risky,” added Gino.  “You tend to lose money on new plays.  NJ Rep has figured it out.  Their audience expects new work and are along for the ride.  They love seeing these plays come from the reading stage to the second reading stage and then on to a production and other productions.  They have a sense of pride; a sense of ownership of these plays, which is the genius of that theatre.  It’s invaluable and it’s rare.  It’s so rare to have a theatre take these kinds of risks on a play, develop them, and then say I’m going to charge money for them now.”

Madeleine George knows how difficult it is for a theatre to survive doing new works.  For about a decade, she was part of 13P (13 Playwrights, Inc.) - a company formed in 2003 by 13 midcareer playwrights concerned about what the trend of endless readings and new play development programs was doing to the texture and ambition of new American plays. Together they took matters into their own hands with the idea that they weren’t going to develop plays, they were going to do them. They produced one play by each member playwright during their run. They presented their final production in the summer of 2012 and then immediately imploded. The website 13p.org tells their story and offers a possible roadmap for artists to follow on their own.

“I think that having the experience of doing it yourself - not waiting around for somebody to pick you or choose you - is good for artists,” she said.  “Visual artists don’t have this problem because they just get their materials and do their work.  Theatre is tough because you not only need resources; you need human beings and a room and all of that stuff.  So the experience of 13P was emboldening for me.  It made me believe that I had a right to the vision for the play in addition to writing it on the page and handing it coweringly to someone else who would take over and produce it.”

“It made me feel confident in general,” she continued.  “And it made me feel like I was the right steward for my own vision.  Then when you go into an institutional theatre, it makes you a better collaborator because you know what you’re looking for and know what you want.  The best collaborations are when everybody is frank about what they’re shooting for. And playwrights in the last 20-30 years have been in the habit of being passive or deferential, hoping and crossing their fingers or begging to be able to participate in their own artwork.  Just getting out of that mindset is positive.”

Collaboration is vital to the development of new works.  Dilorio has had so many of his plays presented by NJ Rep that he has complete faith in the work by SuzAnne Barabas, the Artistic Director of that company. His latest work, The Jag, is loosely based on his own relationship with his father - a situation that sometimes can make the editing process a bit awkward.

“SuzAnne is great at editing a play down and getting it sharper,” explained Dilorio.  “I love details.  I think the devil is in the details and the more details you can give would be better. But I had to admit there were some crazy, unwieldly, wandering details and monologues that weren’t necessary for The Jag.  They were fun for me because they were nice memories, but they didn’t reveal enough about the characters.”

“I trust NJ Rep,” said Dilorio.  “I trust what they do.  What happens when you write a story of your life and somebody says we’ve got to cut that monologue? You need to be ruthless when it comes to cutting.”

NJ Rep and Two River are just two of many professional theatres in New Jersey that present new works.  But these two companies located just a few miles from each other, deep in the suburbs, are creating a theatre row version of their own.  And they are changing the way people not only view theatre along the Shore, but how they view theatre in the Garden State.