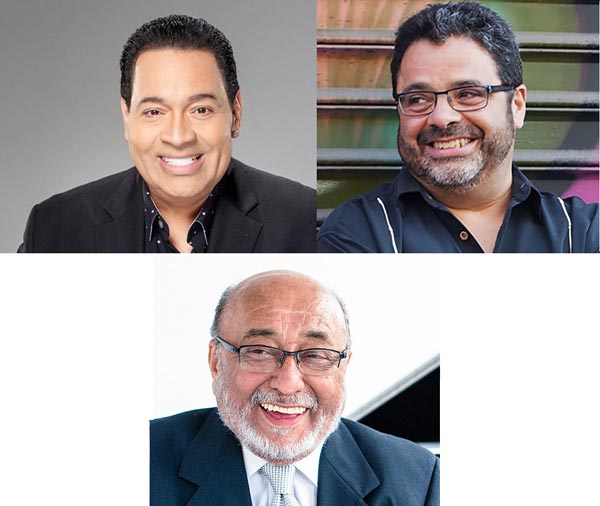 ¡Viva la Música! In the best tradition of the venerated “Jazz Meets Salsa,” series, this all-star lineup features three of the greatest attractions in all of contemporary Afro-Latin music: hard-swinging virtuoso pianist Eddie Palmieri and his Salsa Orchestra, storied bandleader and keyboardist Arturo O’Farrill (son of jazz pioneer Chico O’Farrill and heir to a great musical legacy) and his tribute to Charlie Parker’s Latin at 100, and Puerto Rico’s celebrated son and salsa singer Tito Nieves.

Born in Río Piedras, Puerto Rico and raised in the United States, Tito Nieves began his career while participating in Orquesta Cimarron, a New York-based group. In 1977, he teamed up with singer Héctor Lavoe and his Orchestra and joined the Conjunto Clasico. Later, Nieves started his solo career setting himself apart by singing Salsa in English. He is known for his hits such as El Amor Más Bonito, Sonámbulo, and the English-salsa hit, I Like It Like That (1996). Present hits from the album Fabricando Fantasias include Fabricando Fantasias and Ya No Queda Nada with La India, Nicky Jam, and K-Mil.

Pianist, composer, and educator was born in Mexico and grew up in New York City. He received his formal musical education at the Manhattan School of Music and the Aaron Copland School of Music at Queens College. Arturo’s professional career began with the Carla Bley Band and continued as a solo performer with a wide spectrum of artists including Dizzy Gillespie, Lester Bowie, Wynton Marsalis, and Harry Belafonte. In 2007, he founded the Afro Latin Jazz Alliance as a not-for-profit organization dedicated to the performance, education, and preservation of Afro Latin music.

Known as one of the finest pianists of the past 60 years, Eddie Palmieri is a bandleader, arranger and composer of salsa and Latin jazz. His playing skillfully fuses the rhythm of his Puerto Rican heritage with the complexity of his jazz influences: Thelonious Monk, Herbie Hancock, McCoy Tyner as well as his older brother, Charlie Palmieri.Palmieri’s parents emigrated from Ponce, Puerto Rico to New York City in 1926. Born in Spanish Harlem and raised in the Bronx, Palmieri learned to play the piano at an early age, and at 13, he joined his uncle’s orchestra, playing timbales. Palmieri’s professional career as a pianist took off with various bands in the early 1950s including Eddie Forrester, Johnny Segui’s, and the popular Tito Rodriguez Orchestra. In 1961, Palmieri formed his own band, La Perfecta.