Kittens and Fish are a Winning Combination at The Stone Pony 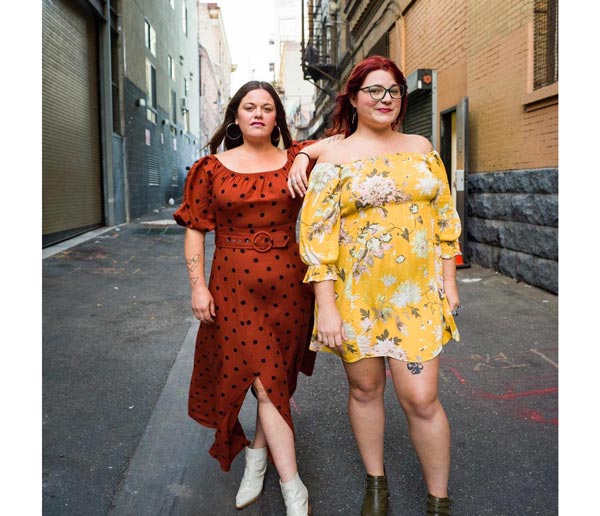 A noteworthy show on Saturday November 13 takes place in Asbury Park, NJ and that is Samantha Fish with River Kittens at The Stone Pony. Recently, Mattie Schell of River Kittens spoke about the upcoming show and the interesting partnerships this duo has formed.

Based out of the mid-west, these two ladies have hit the road hard in 2021 in support of a new EP titled “Soaking Wet” and as they continue their journey things are nowhere near drying up. Schell explains how the duo met and the make-up of their current line-up.

“We live in St. Louis, Mo; Allie actually grew up in Arkansas and I grew up in Illinois right on the Mississippi River; I think she may have grown up on the Arkansas River. Allie came up with the name  when she was young and stuck with it even after she met me. We met because she had moved to St. Louis when she was around 19 or 20 and I had gone to school and had moved around to other places around the country and had kind of just moved back. I’m a little older than Allie and I was bartending and one day she came in for brunch and that’s how we met; we had kind of a neighborhood jam on her back porch and she asked me to be in her band that day.”

“Well, it’s me and Allie Vogler; it has been several different outfits but Allie and I are the core of it. I guess we consider ourselves an Americana/Roots type of group; folk with a little bit of soul and some bluegrass thrown in there but mostly we’re just fun. Right now it is just the two of us but on this Samantha Fish tour we’re going to have a guitar player, our friend Jacob Baxter and a bass player, my partner Nate Gilbert.”

How does a duo from St. Louis happen to get a gig/tour opening for Samantha Fish and The Allman Betts Band? Schell explains that it just kind of, “Happened.”

“We’re so excited; we just happened to get booked to Northstar Artists booking agency which she is also an artist of and so is Devon Allman who is our label exec. and he and Samantha have been friends for a long time; I guess they met from the blues scene, I’m not sure but that’s how I first met Sam. I think I met her in Jamaica, I’ve never played with her or sang with her; not that I think that will happen (laughs) but I hope that we could collaborate. I have met her before and have seen her perform before and she’s fantastic! So, we are really, really excited to go out with her; plus she’s number one on the charts,” she laughed. “We’ve been out on the road on and off since June mostly being opening support for The Allman Betts Band. We recorded a record this year at Sun Studios and Devon Allman produced that record; we’ve been promoting that basically all year long and we’ll be doing that on the Samantha Fish tour and the Allman Family Revival which she will also be on. We’ll be opening for the Allman Family Revival which includes Samantha, G. Love, Eric Gales and a bunch of other really incredible guests.”

Even though they have experience touring, they currently only have two EPs as a duo but Mattie says that will be changing next year.

“We had an album with our friend Martha when we were a trio and we put that out about six years ago and that has a few similar songs on it as this new record but the new record is kind of a new sound and it’s done as just a duo. So, there are just the two EPs right now but we plan on recording a full-length album in 2022.

This isn’t their first trip to The Garden State but it is their first time experiencing the legendary Stone Pony. So, what do they have in store for their audience?

“We have been to New Jersey before, several times,” reflected Schell. “We played in Vineland when on tour with Allman Betts Band and whenever we tour with Allman Betts we always have a little bit of Jersey with us because John Ginty is always on that tour so we have to give a shout out to John our Jersey boy who has played with everybody from The Dixie Chicks to Wu-Tang. We also filmed part of our video for “Atlantic City,” our cover version of the Springsteen song; we came and filmed part of the video in Atlantic City but we’ve never been to The Stone Pony so, we are super excited.”

“I really think, as I said earlier, first and foremost we are fun. We start the show out, we want to get you warmed up, we want to get you having a good time, we have a lot of energy. Jacob Baxter is an extremely talented guitar player and Nate is an incredible bassist so, we are very excited to have kind of a fuller band this time as opposed to just a duo; no drummer this time because all of our drummer friends have gigs (laughs). We will probably add a drummer next time around but for now if you’ve seen us before opening for Allman Betts they will be coming back and seeing something new so we are excited about that.”

Mattie says their website is www.riverkittens.com but their social media is the place to find them easiest. So, for more information, please visit https://www.facebook.com/riverkittens .