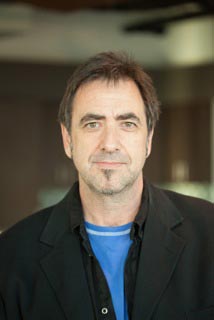 This article was originally designed to be read in the September 2014 issue of New Jersey Stage magazine. To read it in its original format, click here
In the 1980s, a band called Bourgeois Tagg created one of the catchiest songs of the decade, a Beatlesque tune called "I Don't Mind At All." As the song charted around the world, troubles with drugs and alcohol began for Brent Bourgeois, who grew up in Morristown, NJ. Ironically, it wasn't the alcohol and drug use that threatened the future of the band, it was Brent's recovery. After sobering up and becoming a Christian, his lyrics became more and more religious in nature, something that rattled his bandmates.

"For about a year I was showing up at church with a hangover, or showing up at church having not been to bed, but I was there every Sunday," said Brent in an interview with trbazaar.com done years ago. "The whole church was full of grace. They knew what I was doing and they didn't turn their heads from me. By the end of the second Bourgeois Tagg record I was ready to surrender, and did."

Bourgeois Tagg would never release another album and Brent would move on to a rather successful decade recording, producing, and songwriting in the Christian music segment. His last solo record was released in 1994 and he completely left the business in 2002, but recently returned with his first solo record in 25 years. The record, "Don't Look Back" includes the song "Psycho" that features four of the original band members in Bourgeois Tagg (Brent Bourgeois, Larry Tagg, Lyle Workman, and Michael Urbano) — essentially the first new song by the band since breaking up.

Brent says this is definitely a return to pop music. "It's not a Christian record. The last song on the record, "Without You," could be vaguely imagined as such, but it is a pop record. I'm not re-inventing the wheel here. I'm admittedly picking up musically where I left off, plus I learned how to use an arpeggiator (a way of providing synth players with an easy way of playing complex synth parts via simple chords). It's actually a more upbeat record than any other I have made. I hope it's rather timeless-sounding, but it's a record that people familiar with my previous work will be comfortable with."

Advancements in technology inspired him to start recording again. Once he realized that he could make music that equaled his best work while sitting on his living room floor, the economics started to make sense for him. "After I made my last record, I started to produce other people's records, which is something I always had felt called to do, and it was a real living, and I was good at it. It didn't make any financial sense to keep making my own records — they never made any money, and it was a very expensive and self-indulgent thing to do. And I got inspired again working in Logic, and things just started to flow. I don't know why it comes, and I don't know why it goes away, and I don't know why it comes back."

His original plan was simply to make demos on his computer and put them on sale online for anyone that wanted to buy them. But someone he respected heard one of his tracks and asked if he was going to put real drums on the track and then someone else asked if he was going to replace a part with a real guitar. Brent could see where this was going. The material was already beyond the demo stage; he had the makings of a true record on his hands.

"Being a man of extremes, I then decided to get every musician and singer who ever meant anything to me to appear on the record," said Brent. "The few that aren't on it couldn't do it in the timeframe I needed them."
The record includes appearances by his former Bourgeois Tagg bandmates, Charlie Peacock, Kasim Sulton, Todd Rundgren, Julian Lennon, and his son Adrian, among many others. Bourgeois Tagg opened for Lennon on a few shows in 1986 and Julian became a big fan of the band. Together, they share a duet on "The Long Road," a song that has become one of the centerpieces of the album. Meanwhile Rundgren was a major influence for Bourgeois and the producer of the band's final release.

"Musically, Todd made it cool to write major 7ths and 9s in pop songs, and not feel corny about it," explained Brent. "His big influence on me was lyrically. He shocked me out my David Byrne/Talking Heads/observational - ‘Look over there! Isn't that interesting?' phase of lyric writing, and practically forced me to write from the heart. And I never let that go. As a singer, he is fearless, and again, that is from the heart. He doesn't care if he fails… he just goes for it.

"As far as Todd Rundgren and Julian Lennon, it was a question of writing songs that sounded like them. I got them to sound as though they were singing on top of me singing like them, as if it was one of their songs. I've always been a kind of chameleon. My wife and daughter didn't even realize that Julian was on the song — and he sings the 2nd verse and the choruses. And many people that have heard "Poor Me" can't find Todd, yet he's all over it!"

Brent compares himself to Rip Van Winkle in the album's liner notes — a guy who wakes up and discovers technology has completely changed the industry. He says the strangest thing was making the record in his living room in his house in California. He was singing into a digital converter with a mic embedded in it with the goal of spending just $5000 to make the record even despite having an amazing lineup of people playing and singing on it.

"I was sitting at the kitchen table with my wife and she asked me how much the record was going to cost, and I said, ‘Well, I thought it was going to be around $5000, but with all the additional players and getting Todd and Julian, etc., it's probably going to inch up closer to $10,000.' She said, ‘Well try and keep it around $5000.' The absurdity of that conversation is legendary. And I ended up keeping right at $5000!"

Brent wonders about what the future of the music industry will mean for his son Adrian, who is making a serious go at a musical career. "He was more destined to do this at a younger age than I was and I came to it at a very young age, but he had no other interests…" he recalled. "The economics of the music business are so different now, that we did want Adrian to go to college, and we have said the dreaded words to him — ‘You should have something to fall back on,' but it's like talking to a brick wall. The one thing he has going for him is that he is not materialistic in the least — which is going to come in handy, I'm afraid..."

After not recording for decades, Brent swears it won't take that long for another release. In fact, when he heard "Psycho" for the first time, he began thinking of all the things they could have done. Brent says he wanted Lyle to write a guitar track for him to write on like "I Don't Mind At All" but he was too busy. When he finally did it, it was too late, but it could mean the beginning of the next record.

"I believe that everything happens in the order it does for a reason; we just might not be able to discern the reason. Everything happened the way it was supposed to," he says when asked if he ever wonders what if Bourgeois Tagg hadn't broken up. But then he thinks about his own personal demons and realizes there was only one path for him if he kept going that way. "I'd be dead or in jail, or at the very least divorced."

And that's one reason he'd prefer to not look back.