An Interview With Veronica Kuehn from "Elf, the Musical" at MSG
NEWS | FEATURES | PREVIEWS | EVENTS
By Gary Wien 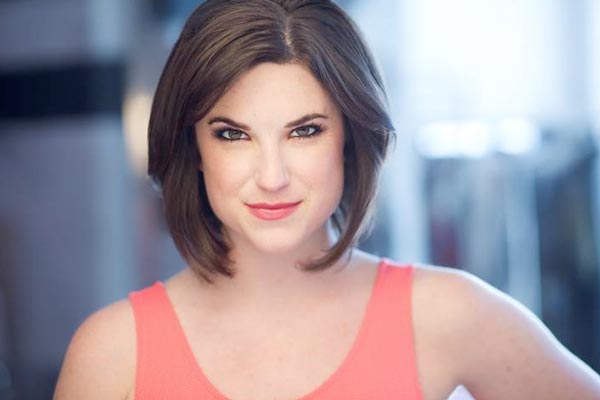 The Madison Square Garden Company presents Elf, The Musical from December 13th through December 29th.  The musical, based on the hit film with Will Ferrell, tells the hilarious tale of Buddy, a young orphan child who mistakenly crawls into Santa’s bag of gifts and is transported back to the North Pole. The cast is highlighted by George Wendt (of Cheers fame) as Santa, Eric Gratton as Buddy, and Veronica Kuehn from Spotswood as Jovie.  The production is directed by Sam Scalamoni, the Artistic Director of Skyline Theatre Company in Bergen County.

This is Kuehn’s second time as Jovie on Elf’s national tour.  New Jersey Stage spoke with Kuehn about returning to the role, her early days of theatre in NJ, and what the holidays mean to her.

What was it like jumping back into the character of Jovie? Is it like you’ve never left?

It kind of is.  I loved doing the show so much the first time.  That was one of the reasons I decided to do it again this year.  I just had such a blast!

I really enjoy the journey that Jovie gets to take because she is so unenthused by Christmas.  But then she meets Buddy and he sort of turns everything around for her.  He reminds her what Christmas is all about and she becomes a believer in Santa again.  That’s a fun ride to take each night.

It’s interesting because Jovie is definitely less enthused about the holidays than I am.  In my real life, I’m actually very excited and doing all sorts of secret Santa and fun stuff.  We just went Christmas caroling today. 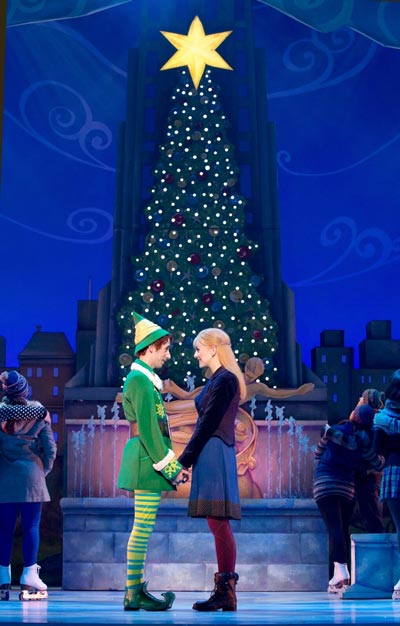 Speaking of journeys… Looking at your body of work, Elf seems so sweet compared to shows like Clinton, the Musical and Avenue Q!

It’s true! I have one niece and two nephews.  Two of them are too young to come out to quite anything yet, but it’s definitely nice that I can say, “everybody in the family can come out and enjoy this one.”

Clinton was definitely a little edgier and Avenue Q was as well.  So, it’s a nice change of pace to do something that’s enjoyable and kids can come to… It’s so fun to hear kids in the audience saying the lines.  Last night Buddy was saying, “come on, everybody sing” and you’d hear kids begin to sing.  That kind of stuff is great and definitely a change of pace from some of my past work.

Just waiting for the kids to discover the shows on YouTube, eh?

Yeah (laughs).  I think we did a good job in Clinton of not making it super, super dirty.  My mom is always the best barometer for me.  If she can come and watch something and say, “oh, we had a nice time” even if it’s a little edgy than I know we’re doing something ok.  If she came and was like, “Veronica… I don’t know about this” than I definitely know we need to clean it up a bit.

Are you a fan of Elf the film?

I am actually.  It’s become something that we watch seasonally now.  I loved the film.  I thought Will Ferrell was so funny in it.  And I do enjoy that now it’s a musical and we’re doing new songs and new orchestration.  I get to sing some really cool new songs that are fantastic.  We have a full orchestra coming to Madison Square Garden.  I think we’ve added 9 extra pieces for the MSG run.  My favorite part of the show is the music!

There are new films and plays about Christmas every year, but few seem to stick the way Elf has. What makes this such a special story? Is it the music or the comedy?

I think it’s the comedy.  I think people love Buddy.  He sort of reminds everybody that it’s ok to get excited about Santa and Christmas.  I don’t know that we’ve had that many stand out brand new characters we can follow and get to enjoy seeing Christmas through their eyes.

I definitely think the comedy is a big part of it.  What I like about our show is that you’ll definitely hear some of the same lines directly from the film.  There are some new things because it’s a stage musical instead of a film, but I like that it preserves a lot of the screenplay, which is cool. 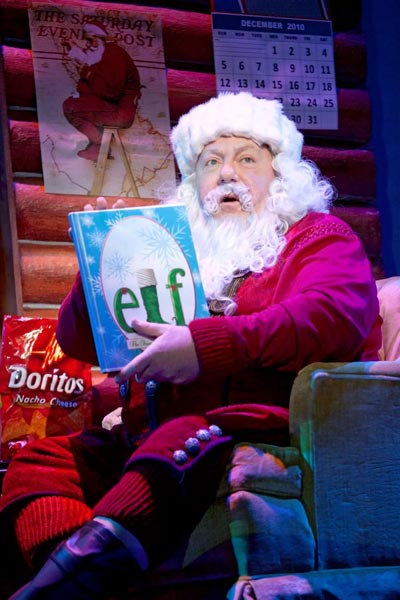 As a huge Cheers fan, I’ve got to ask what is it like working with George Wendt?

He actually started with us here in Boston - I think they must have planned it that way! He’s fantastic. I think a lot of us were a little star struck and polite, but he’s very nice.  A couple of people went out to the Cheers bar the other night and took some pictures with the photo of Norm on the wall!

What kind of Christmas traditions do you have? You mentioned caroling, is that something you do each year?

It’s not something I’ve done a lot of.  We were here in Boston and one of the cast members who does it frequently said that the children’s hospital down the street from our hotel might be a fun place to get everybody together, get permission, and go sing in the children’s ward.  And it was really nice.  It was uplifting to focus on some people who may not be having the best holiday season this year.  We tried to bring some of our infectious Christmas spirit to them.  It was really special.

Our tradition in my family is pretty much around the food! We get together and have a full day of eating and opening presents - just hanging out and having some win around the Christmas tree.  I’m so excited to do that!

You grew up in Spotswood, New Jersey right?

I did.  I went to grammar school in East Brunswick at Saint Bartholomew's School and then went to Bishop George Ahr High School in Edison.  We lived in Spotwood and my mom was there until just two or three years ago.  She sold our house and now’s she’s in Pennsylvania, so no one’s in Jersey anymore!

Do you remember some of your first theatres?

I did shows at my school at St. Barts and did community theatre as a kid at Playhouse 22 in East Brunswick, New Jersey Repertory Company, and several summers of plays at Plays-In-The-Park in Edison.  I was also part of Paper Mill Playhouse’s Rising Star Conservatory during the summers I was in high school.  I did a lot before college and then I went to school in Boston.

Finally, are you excited to be in New York for the holidays?

Anytime I can be working and employed and stay in New York - working close to home and family - is my personal favorite.  It’s hard to be traveling and especially in hotels over the holiday season.  I would much rather be in New York, which is why coming back to Madison Square Garden is so special for me.  We have a show in the afternoon on Christmas Eve, but I’ll get to load up my bag with all my presents and get on the train to see everybody.  For me, I’m spoiled in that my family is so close.  A lot of people that I’m friends with are from California or places like Oklahoma who rarely get to see their family.  And I love being in New York - especially around the holidays. 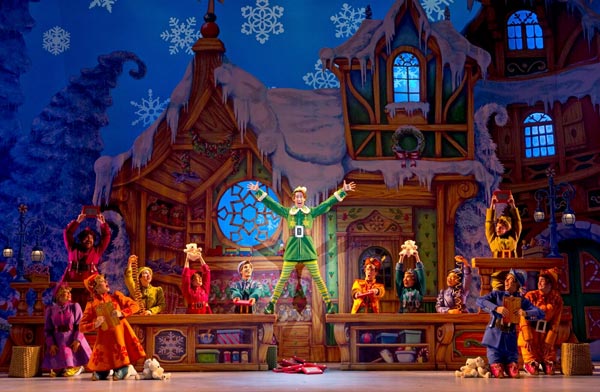