A Look At "The Fine Print" by Amanda Rose Riley 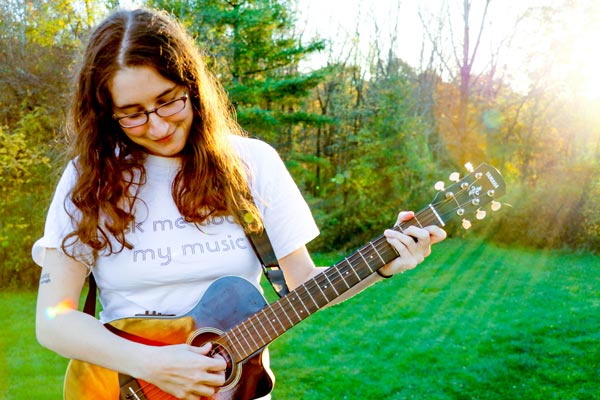 Amanda Rose Riley is an artist who doesn’t believe in waiting for the right time to pursue a dream. When she has new songs but no money for studio time, she sets about recording acoustic albums in her bedroom (on gear that only cost a few hundred dollars) without missing a beat. When she can’t fill a tour date with a venue booking, she enthusiastically organizes a house show, busks for tips in a public place, or finds a local open mic and makes some new friends. And perhaps most impressively, for four years in a row she lugged her guitar onto an annual punk cruise to entertain guests informally – each time uninvited and unpaid, at her own expense.

She's also very good at promotion - something we appreciate at New Jersey Stage.  We featured her in 2018 when she released Secrets I Told To A Sound Hole. Her latest album, The Fine Print, was released in June and she sent us her notes on several tracks from the album.  We're reprinting the notes here, along with lyric videos for each song.  Both are nice touches by an artist and promotional ideas we encourage other artists to utilize.

Amanda is an artist who isn't afraid to let her lyrics take you into her own life - the troubles, the fears, the dreams, and the successes.  As she says on her website, the songs often deal with themes of overcoming anxiety and being bold. "These are not new themes for me, but more than before, this one feels like drawing a line in the sand," she wrote. As you listen to the album, you can sense the line has been drawn.  Here is a look at the album from Amanda's eyes.

The Fine Print – Album I’ve spent the past year working on my songwriting and arranging skills, and this album is meant to be the culmination of that. I’ve written probably close to 100 songs since the beginning of lockdown, and these are eight of my favorites, and hopefully show a variety of different musical techniques, moods, and lyrical themes. I tried not to put too much pressure on myself with a long lead time because I have so many more songs ready to be recorded and I just wanted to get these out there. I recorded, edited, arranged, and mixed them over the course of a few months, trying to do the best I could possibly do – and then set the release date for a mere two weeks after I’d finished them.

Most of my previous releases have been acoustic (with the exception of Secrets I Told to a Sound Hole, but I had help for that). This is the first time I’ve tried to create a fuller, “band” sound by myself. Two of the songs are acoustic, but most contain electric guitar (which I played) and virtual bass and drums (which I programmed myself); one even has a virtual string arrangement. Virtual instruments have come a long way and I think they make the perfect addition to my style for now, but of course I look forward to working with a full band in the future when I have the resources.

Track 1: The Bench at the Top of the World - I wrote this song early last summer and it’s become one of my most played songs during my weekly live streams, one of my favorites and a fan favorite too. I decided to keep it acoustic because I was so used to it that way that it was hard to imagine it differently. I intentionally made the lyrics vague so that everyone could imagine their own favorite place, but in my heart it’s about London. I fell in love with London about eight years ago the first time I visited, and I’ve never looked back. I think my absolute favorite spot in the world is a particular bench on Parliament Hill, Hampstead Heath that’s perfectly hidden away with a great view of the city, so that’s what I was picturing. With all the stress, deprivation, and mental health upheaval of last year, it really made me feel good to picture a place that makes me so happy and calm, and to turn it into a nice little song I can sing to myself (and others!). I look forward to getting back there again someday soon!

Track 3: Have You Ever Slept with the Lights On? - This is probably the arrangement I’m most satisfied with on the album: I was very happy with the way the additional instruments (electric guitar, and virtual drums and bass I programmed myself) came together and brought the song to a new level. Lyrically speaking, a lot of the songs on this album are basically different lenses of viewing anxiety and fear. In this case, I’m sure I’m not the only one who has had (and I still have) brave role models to channel when I want to be bold. This song is an imagined conversation asking that person if they’ve ever felt this way, because if they have, then I’d have more hope that I’ll be as brave as they are someday. The final verse is a sort of hopeful prediction that fear will inevitably lessen eventually, if I keep acting bold in spite of it.

Track 5: The Artless Artist - I’ve been told by my close supporters who previewed the album that this was musically the most interesting song, and a direction they’d like to see me go in, which I appreciate. I do plan on writing more songs in this vein, which is a little busier and more rock-oriented. Some said that the lyrics are a little bit too idiosyncratic, and not many people will relate to them, but I think I disagree. It’s a song about social anxiety and awkwardness getting in the way of achieving my goals, and while perhaps a majority of people haven’t experienced this, I know a great many people have. I personally think there are enough artists in the world who are aiming to be relatable to everyone. I only need to be relatable to people who have had similar experiences; this way I can tell my own personal story with no regrets. Maybe it’s time someone wrote a song like this for the rest of us.

Track 7: Anxiety - I’ve dealt with anxiety of varying intensity for as long as I can remember and it can be very intense, so I thought it was about time I wrote a song about it directly. I think its physical experience is different for everyone, but for me it mostly manifests itself as a shortness of breath. Sometimes, I won’t even know what I am worried about, but just going about my day it will become difficult to get a good breath and it almost feels like I could suffocate. It was hard to believe the doctors that I wasn’t dying until I realized that it came and went with stress and transition in my life, and many years passed without anything worse happening to my health. I wrote this song to explain anxiety to people who wonder about it, and to give a voice to those who deal with it. I think we’ve all had an especially rough year. I kept this one acoustic with a little bit of strings because I just loved the way it sounded and the emotions it evoked for me.

Track 8: I’ll Bring My Voice - I almost don’t want to share the inspiration for this sweet little acoustic song because it’s a little embarrassing and might ruin it! But I actually wrote this during a 50/90 (50 songs in 90 days) project last summer, where I was trying to write a mini-musical about a girl who tried a million different ways to become “extraordinary,” but ultimately realized that it was her efforts that made her extraordinary. The “musical” experiment was a pretty big failure and I didn’t really like any of the other 10 or so songs I wrote for it. But this concluding one really stuck out, and I knew right away that I wanted it to be the last song on this album. My musical’s theme was obviously autobiographical enough that the song perfectly describes my current feelings about my music career. I know that my music isn’t the same as the stuff that you would hear on the radio and a major label would probably never pursue me, but I don’t care about becoming rich or famous or validated by industry. All I want is a direct connection from me to another person through my music, and I’ve already done that many times, so I’m happy. I will keep trying to reach more people and express myself better in more songs, but I’m already happy.