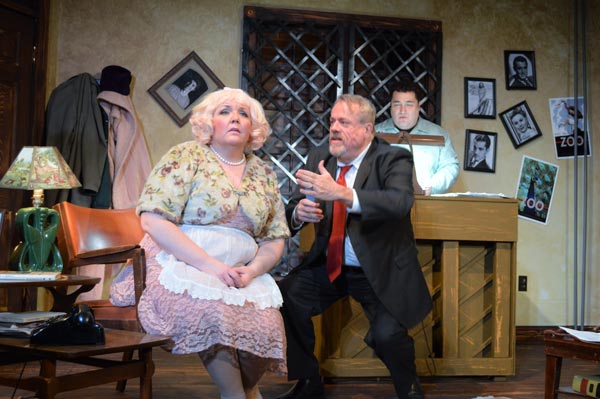 Dysfunctional and yet iconic characters inhabit most of the productions of  John Guare’s plays.  HOUSE OF BLUE LEAVES is no exception introducing the audience to a triad of iconic dreamers … Artie who wants his dream to be reality; Bunny who makes her dreams reality by supporting others’ dreams, and Bananas who has lost her grip on reality and has only dreams left.

How much subtlety and nuance can one expect from a plot that is driven by a zookeeper struggling to be a songwriter, the city-wide frenzy of a papal visit and the potential “blessings” that could provide our dreamers, an AWOL son with negatively bombastic intentions, and a schizophrenic who barks like a dog when reality gets too close?   None … is the answer to that question.   Mania and black comedy are the bywords of this production.

South Camden Theatre Company opened their production of HOUSE OF BLUE LEAVES with director, Susan Jami Paschkes, saying in her program notes that human existence is “…like planets which do not find a path into orbit.”  Paschkes designed with Bob Bingaman and Andrew Cowles a claustrophobic and dark 1965 Queens, NY, cold water flat for our dreamers.   While the placement of the piano and the use of the kitchen itself could be argued to provide better support from optional placement, the apartment is very appropriate.   The placement of areas on either side to provide lighted monologue delivery areas generally works well.   While Bunny’s costumes add period color and panache, the  overall chromatic scheme is like the ethereal Bananas who drifts around in pale nightclothes for the majority of the play.   These people are truly lost planets and their futile hopes for this “special day” to get them into their orbits hang in the air of this production.

Artie, played with Jackie Gleason-esque bravado and sensitivity by Damian Muziani, inhabits his character giving the audience a full view of how the vagaries of his life buffet him.   Playing Bunny is Gabrielle M. Affleck.  Her performance is a pastiche of comedic abilities.  Affleck’s high-pitched vocality could have been grating but never was and Affleck provided a commanding performance for this excitable, twitchy woman.  Nuance is something to be expected from Bananas, played with aching despair by Susan Chase.   Chase’s ethereal and drifting performance seemed unattached to those around her who are grounded in their daily lives and their current problems.   Chase provided a pictoral difference between the women in Artie’s life but more was needed to show the contradictory elements of her schizophrenia.   Joshua McLucas gives a strong performance as Artie and Banana’s son, Ronnie.   His explanatory monologue about his feelings and the need for the action he is taking is clear and believable in the midst of the chaos that is this day for everyone else.

To use the theatrical phrase, chaos ensues in the second act.   The introduction of pushy nuns, the helpful but easily distracted Hollywood friend, Billy Einhorn, and his wife, Corrinna Stroller, who is deaf  but doesn’t want people to know, keep the action moving right through to the apartment explosion … yes, I said explosion!

Einhorn and Stroller are played effectively by Tim Sagges and Adriana Alveario, respectively; and the balance of the ensemble adds the final touches of what Guare wants us to believe is modern civilization.   It is a delightful evening of laughter with some wistful touches!  Comedy runs throughout the production and the second act brings hysteria to the stage.

Come and be entertained by another production well produced by SCTC. 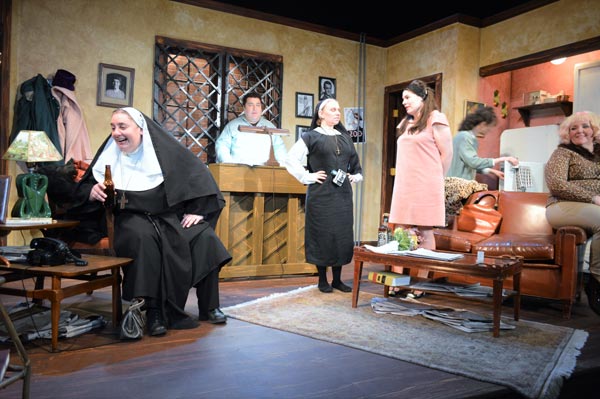