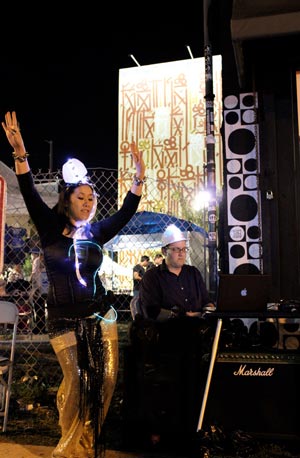 (NEW BRUNSWICK, NJ) -- The Mason Gross School of the Arts is set to launch a new music series at the school, NJDAC, highlighting computer-based music. On Sunday, October 25, 2015, Mason Gross music students and faculty, as well as guest artists, will present original music. The instruments: Laptops, along with acoustic instruments such as flute, violin, and clarinet. The event is set for 7:30 p.m. at Richard H. Shindell Choral Hall, in Mortensen Hall, 85 George Street, on Douglass Campus. NJDAC is free and open to the public. Tickets are not required.

“Ever since Max Mathews developed the first music programs at Bell Labs in the 1960s, New Jersey has played an important role in the use of computers to make music,” says Mason Gross School faculty member Steven Kemper, referring to the leader in digital audio research. Kemper, who is organizing and participating in the concert, says the program features computer-generated music for loudspeakers and video; collaborations between acoustic instrumentalists and computers; interactive belly dance by performers connected to sensors that generate sound; and a brief book reading accompanied by a computer-generated soundtrack.

Kemper says he hopes that audience members will expand their conception and experience of music.

NJDAC is presented by Music Technology at Mason Gross.