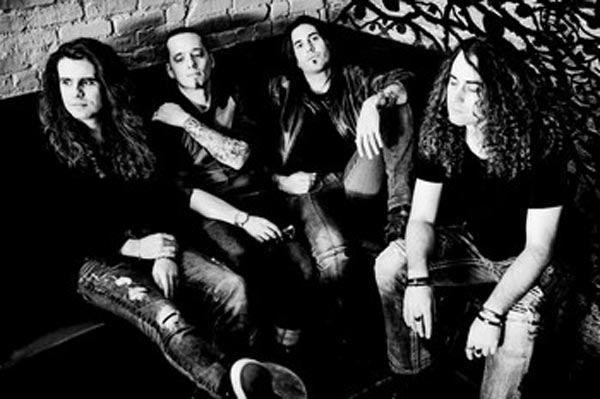 When one decides to take charge of their  vocation and pursue fulfillment be it in an office, the outdoors or an artistic setting, good things can happen and when you are vocalist Patrick Kearney and guitarist/keyboardist Chris Lane of New York City based rock band Station; you discover that parallel paths sometimes converge and sometimes these chance meetings lead to bigger and better things. Recently, vocalist Kearney discussed the formation of Station, their new record “Perspective,” upcoming gigs, the band’s name and more.

“Chris and I both have almost the exact same story, we were both playing in bands; I was in upstate New York and playing in Connecticut and he was living in the city and we were both just unhappy with the direction that the bands were going in,” began Kearney. “I was in a Judas Priest type metal band, I love Judas Priest and I’m definitely the metal-head of the band but I was just really unhappy with where it was going and not feeling musically fulfilled and I said, this just isn’t for me and Chris had pretty much the same thing happening with him but not a metal band. So, I started looking for musicians and networking and I put some of my videos out there and Chris actually caught one of my videos and sent me an email and he sent me videos of him playing and we said, oh yeah; let’s have a phone call. We always joke that it’s like we were; picture us both on opposite ends of a bridge running towards each other with “Chariots of Fire” playing in the background (laughs) but that’s what the first conversation was like because we were a little unsure of each other. So, he said, “Let’s get together and jam on some covers. I’m really into this band called Living Colour” and I said, I love Living Colour! Then he said, “Do you like Skid Row? Do you want to jam on some of that?” I said, I love Skid Row! It was literally meant to be, it was one of those moments where it was so natural, nothing was forced. We got together and started jamming and writing; we found the other guys and the rest is history.”

Now that those aforementioned paths crossed and the pieces were in place; what to do about a name? Ah yes, the name; most likely the biggest decision and challenge a newly formed partnership faces. Luckily, Patrick and Chris share a common cinematic interest which led to their moniker.

“So, as I said, Chris and I met a long time ago and when we were coming up with the name; every band has to have the sit down, OK, what are we actually going to call ourselves moment. We were having a rough time coming up with stuff and apparently Chris our guitar player had thought about Station for a while and when he told me I was originally kind of like, eh, I don’t know and I wasn’t super crazy about it and he said that it was a Bill and Ted reference. I said; what are you talking about? I’ve seen Bill and Ted and he said, “No, no; the second one, “Bill and Ted’s Bogus Journey,” the creature; Station who was like the greatest scientific mind in the universe and everything that is super cool is: Station!” I had never seen it before so he suggested that I go to his apartment and watch the movie and I did and we watched the movie and the credits rolled and I said, I think we’re Station,” he said with a laugh. “We are both Bill and Ted fans but I had only seen the first movie; one thing that is different about band names nowadays is that you have to think about Google, which is why band names have become like sentences. We decided that we were going to through it out the window because if you enter Station or NYC Station you get Metro North, if you enter NYC Station Band you get city buskers; you know what I mean? We said, we guess we have to become so famous that we get to the top of the list (laughs).”

With three full-length albums and an EP already under their belts; they were well on their way toward the top of that list and as not to slow momentum they’ve now released a fourth full-length disc. “Perspective” is a 10-track effort due out on October 8 which has some band “Firsts” and contains material that their fan base both old and new can hear in, well; their own “Perspective.”

“This our fourth full-length, I think the songs fit into the world but also fit into the different influences of Station over the years. The whole idea of the concept of “Perspective” is exactly that. There is not one thing going on in the world, there are so many different things and so many different viewpoints and I’m not just talking politically. I’m talking about people taking events that are happening or taking their own events in life and viewing them in many different ways so that you end up with the idea that not everything is unilateral, there is no one-way of thinking about things; you as a person can choose how you want to see the world. The other side, which I actually think is more how I have viewed it is the evolution of Station’s sound. If you’ve listened to our other records; I don’t want to say we have been afraid but we have evolved where we decided that it’s not just one thing; we are influenced by so many things. A lot of bands in the melodic world kind of stick with; if they’re a sleaze band every song is a sleaze song about sex, drugs, rock ‘n’ roll, if they’re a band like Alias; they’re rock and it’s kind of clean and melodic sounding with a lot of ballads. We are more than that, we have “Believe” which is a hard rocking song, we have “Do You Really Want to Fall in Love Again?” which is a power ballad, we have “Spanish Steps” which is kind of almost like a clean Prince song. We have been very liberal with our use of keyboard on this record which is not something that we have done in the past; if you listen to this album I think it’s the most diverse thing that Station has ever done because it is not just one thing. We all came into the production with the mindset of we’re not going to just do all rock songs or all ballads, we’re going to come in with a variety of different ideas but they’re all still Station; you can still tell that this is how Station does stuff.”

“It’s funny because in the last few years, I think one of the things that has been missing for a lot of people musically is a unifying force in rock ‘n’ roll,” he continued. “The further you get into nowadays; rock music in general has basically separated into two facets. You have indie rock like The Strokes or acoustic rock or metal and there isn’t really like a Guns N’ Roses anymore and then all of a sudden you see these bands popping up like The Struts, Greta Van Fleet, like Dirty Honey where it’s a return to the classic sound of rock ‘n’ roll; a way where it kind of bridges that gap and for us it’s like, hey, it’s OK to play guitar solos again, it’s OK to have soaring vocals and melodic hooks again. You don’t have to have it be clean electric guitar with an acoustic track or flip all of the switches to 11 and grind with heavy metal; there’s this balance in the middle.”

Kearney says that although the entire cast is involved in the product; there is one member who does more of the songwriting chores than the rest and even though over the years there have been a personnel change or two; the focus is still the same.

“We’ve had a few personnel changes; Emi Asta is our second bass player and I can’t believe we found him. He’s an incredible bass player, an incredible singer, he’s really good on the drums and he’s mixed the last two records; he has so much talent and it is great to have people in the band who have that level of talent on the other side of the mixing board as well and our drummer is Tony Baptist. I think it is the best album we’ve ever done, I really do. I think it’s the best for a ton of reasons; the last album “Stained Glass” was the first album where we had the most control as a band. The first and second records we did everything in a studio on Long Island and we loved how it came out and the people there were great but we weren’t there for all of the tracking or the mixing and we were working with producers. When we did “Stained Glass,” a lot of the songs were old songs that we had written years ago and it was the first album that we did by ourselves. There was a level of comfort in it, we were in control and executing and not experimenting as much. This current record, all of the songs are brand new, it was completely in our control and we found our groove for how we want to do things going forward. There is no asterisk to anything like that; there was nothing that was comfortable about it where we could just say, oh, we’re executing; we really pushed ourselves to think about the songs and for me as a vocalist to listen to the tracks and make decisions on how to approach the songs having never played any of these songs live.”

A second single and corresponding video from the new release called “I Can’t Find My Way” are also available for your listening and viewing pleasure but beyond this; what are the band’s plans to promote “Perspective?”

“We have a show in New York City at Arlene’s Grocery on October 22, we might have a couple of other shows in November and we are in the planning stages to get on the road in March or April of next year; it’s a crazy time right now for live shows. Even when things were normal; now you have bands cancelling shows and tours because of the Delta Variant so, we’re trying to be smart about it. We’re in a stage right now where we are planning for the best but expecting the worst. We want to get out there, we want to be playing shows, we’re trying to be as smart about it as possible which is why we’re not playing a lot of November and December shows. We’re not going on tour this year, we figured we’re going to give it a little bit, make sure everything has died down; hopefully another variant doesn’t pop up that destroys everything and that by March and April we can go on tour and support our record.”

To find out more about Station, their new release, tour schedule and more; please visit www.Stationband.com .