(NEW YORK, NY) -- After being shut down on opening night last year due to covid, American Bard Theater Company will present the World Premiere of Echoes in the Garden by Ross G. Hewitt from October 20 through November 6 at The Chain Theatre.  The production is directed by Aimee Todoroff.

Returning home can often be fraught with family drama. For Ruth Hemmerich, bringing her young son to meet her parents is marred with a dark history and racial tensions. Set in 1962 with flashbacks to the late 1920s, in the home of Marion and Henry Hemmerich, the family tries to navigate social and familial expectations in the wake of loss that echoes through the generations.

“I met my maternal grandmother only twice in my life. The first time, I was three years old,” remembers playwright Hewitt. “This play is based loosely on that visit. I only remember visiting a chicken coop for the first time and my mother saying the visit did not go well. I took those few facts, and what personality descriptions I had of my grandparents and deduced what may have happened and why.

I grew up not knowing my mother's parents and wondered was it just because my sister and I were bi-racial? Or was there a possible deeper explanation? One thing my mother talked about was having a brother who died at the age of four years old. That happened five years before she, the next child, was born. She always felt she could never live up to the memory that her parents, especially her mother, held on to. So, my personal rejection by my own grandmother led me to explore the topic artistically.”

“While the events of this play shift in time, “Echoes in the Garden” begins in rural Pennsylvania in the spring of 1962. That is very early in what is generally thought of as the modern Civil Rights Movement,” explains the director Todoroff.

"Much like today, it is a time of protest and unrest. The values of the past are being challenged by a more inclusive vision of the future. Even the simple act of loving is a risk when society has enforced a racist and patriarchal hierarchy.

At the center of all of this resonance, “Echoes in the Garden” is essentially about love: the love of a husband for his wife, the love of a parent for her children, and the desperate need for a child to feel the love of her parents. The central question for this family, and for all of us, is how we let past trauma stunt our capacity for love or use that experience to create a better, more loving future.” 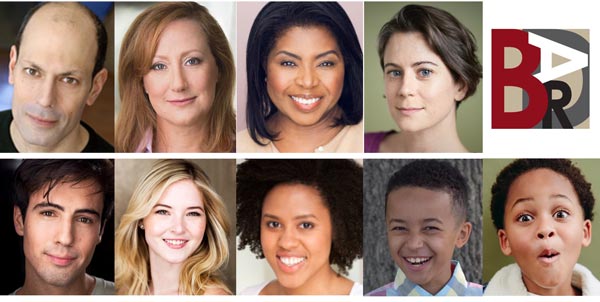 The production features scenic design by Mike Mroch, costume design by Debbi Hobson (A Letter to Harvey Milk), and lighting design by Annie Garrett-Larsen. Jeanne Travis is the sound designer and Aoife Hough is the stage manager. Publicity by Katie Rosin/Kampfire PR.

Performances begin Wednesday, October 20 and continue through Saturday, November 6. Opening Night is Friday, October 22 at 7:00pm.  Running Time: 90 minutes (no intermission). Tickets are $25 (student/senior $20 and previews $10) and available for purchase online.  Tickets may also be purchased in-person at the theater a half hour prior to the performance.

ROSS HEWITT (Playwright), a born and bred native New Yorker, is an associate member of the American Dramatists Guild and an active member of the Village Playwrights, a group that gives LGBTQ playwrights and screenwriters a voice. His full-length play, When October Goes, was produced by the Ujima Theatre Company in Buffalo, NY and received an ArtVoice Artie Award nomination for Best New Play. His one-act plays produced by the Village Playwrights include Quicksand, Mother Knows Best, The Middle, Crossover and Witches Brew. His one-act play Booties was a part of the 13th Fresh Fruit Festival in New York. His jukebox musical, Rainbows and Ribbons, premiered at Don’t Tell Mama in New York in 2017. His newest full-length work, Echoes in the Garden, is under active development. He is a founding member of the American Bard Theater Company and has appeared in many past productions.

AIMEE TODOROFF (Director) is a freelance director working out of NYC. She has been a part of several Obie Award-winning productions, performing in the Peculiar Works Project’s Off Stage-the East Village Fragments and directing Green for the Metropolitan Playhouse. She has also directed at Primary Stages, The Living Theatre, HERE Arts Center, American Bard Theater, in traditional and non-traditional theater spaces, and regionally. She has directed the premieres of works by Cusi Cram, Daisy Foote, and Chris Harcum. Aimee received her MFA in Directing from Southampton Arts, studying with Marsha Norman, Nick Mangano, and Rinde Eckert among others. She has studied with SITI Company and taken master classes with the esteemed teacher and mentor Karen Kohlhaas. Aimee was the Assistant Director under the director John Rando and the playwright David Ives for Classic Stage Company’s production of The Heir Apparent. She is proud to be the Artistic Director of the indie theater company Elephant Run District, dedicated to creating a collaborative dialog between artists, audience, and communities, and is the Managing Director of the political advocacy organization The League of Independent Theater.  .

AMERICAN BARD THEATER COMPANY uses the language of playwrights to inspire the creation of specific worlds on stage. We work to develop our artists’ skills by investing in projects that nurture and challenge our talents.  We believe in the power of a shared experience between our artists and our audiences, using plays to inspire curiosity and self-reflection. American Bard Theater Company has been a not-for-profit organization serving the Greater New York community since 2009.

Our company is helmed by two women who share an insatiable curiosity about human beings and how theater and its focused immediacy can reveal our multifaceted world. We have invested our time and talents in independent theater because it provides the most satisfying forum for us to create specific worlds through the language of the playwright, keep our craft sharp through self-production, and build community with fellow artists and audience members while exploring themes that spark our curiosity.