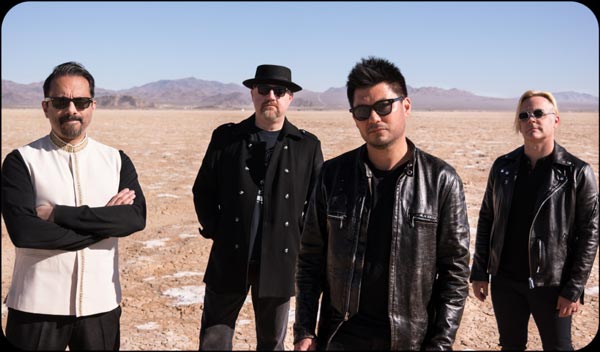 "That's just the name of the band, the last time we existed we were 19 years old and it was just sort of a goofy name. There's no huge meaning; we were walking down the street on Telegraph Avenue and noticing people chattering in our group about this thing and that thing with a Jenny and a second Jenny and a third Jenny; the name just kept coming up so we just sort of thought that was cute but now we're not particularly attached to it, it's just what you call us."

The Jenny Thing is comprised of four members, guitarist Shyam Rao, Ehren Becker on bass, Mike Phillips on drums and guitarist/vocalist Matt Easton. Recently, Easton elaborated on the band's history, their new record and more as they've re-united with a sense of purpose.

Northern California was where they cut their teeth as young musicians but they came to form as a unit on the Berkeley campus of the University of California where they achieved modest success.

"I'm definitely born and bred Bay Area, as are two of the other guys," said Easton; "Shyam Rao my songwriting partner and the other principal guy came out from Pennsylvania and I met him at Cal."

Shortly after performing a series of initial live gigs in 1991, they released their debut effort called "Me" which was described as having a "Semi-acoustic sound" and followed that up with "Closer and Closer to Less;" off of which they did some minor touring and even made it through the first round of the television show Star Search.

The year 1999 saw the release of their third record titled, "Nowhere Near You" and also the demise of the band as their lives took turns and twists in different directions.

Ah but just as life can get in the way and push one down a different path like a river meandering through a valley; it can also lead to new opportunities. Such was the case with these gentlemen and in 2016 they began the process of a reunion which has now led to the creation of their latest disc; "American Canyon."

"The key thing was that Sean moved out of New York City to Davis which is just a bit north of the Bay Area; he moved back to Northern California. We started doing  just a little bit of work together sort of organically showing each other demos or finishing each other's songs a little bit but it was actually the song "American Canyon" that just sort of stepped up the quality; it felt like it came out of nowhere and that song kind of threw down the gauntlet. It was like, OK if we're capable of this or if this is showing up in our writing, we need to catch the wave. So, I would say that the band really rallied around the material and in some ways rallied around that one song which inspired us to write better and re-write some of our more recent stuff and connect it into the album which was released on June 18."

The band issued a statement that this album was "Demoed into existence," and when pressed as to why Easton readily explained as well as also divulging some of the recording process which included some antique instrumentation.

"It is a short full-length, it's eight songs. The whole thing was made in house so, it's got a combination of fully re-tracked stuff but also a lot of the writing process made it onto the final record. So, "Demoed into existence," I guess it's the kind of thing with modern recording where sometimes you're not sure exactly what you're doing; meaning what step in the process you're in. So, yeah, a lot of it was written or improvised onto tape and edited; yeah, that's what that means (laughs)."

"Garage Band is our recording format of choice," he continued. "Just because it's simple and fast and we have some fancy plug-ins that we use with it so it's not purely your off the shelf Garage Band and yeah, we do have a number of old instruments on it. The writing instruments that I'm on the most are this 105-year-old piano that I've got right here and a couple of old guitars from the 50's and 60's but the record is very electronic. There are a few places where the piano shows up and it has been kind of captured in what I call almost a 1980's, super-bright compressed sound. We've kind of got that old and new thing, I do a lot of writing on old instruments but I do also like a lot of aggressive and kind of whacked-out sounds; actually, a lot of the writing was on guitar but the album has very little guitar on it really, especially compared to our old stuff. The reason for that would be space, freshness; sort of trying to have a track that's very drum heavy, very vocal heavy and guitars just eat up a lot of space. You can instantly take up all of the mid-range of a track just by strumming one chord you can eat up all the space; we were very economic with our guitar sounds and the amount that we played."

Even though pandemic restrictions have eased; the band has a plan and it doesn't necessarily involve touring or a lot of live performances.

"We've been pretty digital about it, we actually made an appearance on a filmmaking competition around a month ago and we'll probably do another film festival. A lot of where our effort is going at this point is towards film and filmmaking; I have a couple of possibilities to score films that I'm pursuing. There's online kind of streaming performances; we did a submission for NPR's "Tiny Desk" and we submitted our thing which was pretty cool and it's on our YouTube channel. It's an electronic duo format but I think it is very human and has a lot of emotion to it and I think it's pretty cool. We also have a video out; we are pretty much on the virtual thing here. We will definitely play locally at some point but it won't be a concerted effort. We have a really nice video for the song "American Canyon" which was actually shot in the Mojave Desert and it came out a few weeks ago. It is very beautiful; it has a woman on a horse and a man in a truck and a dog and the band; it's very cinematic and landscaped and it's pretty cool."

To discover more about The Jenny Thing, please go to www.thejennything.com.