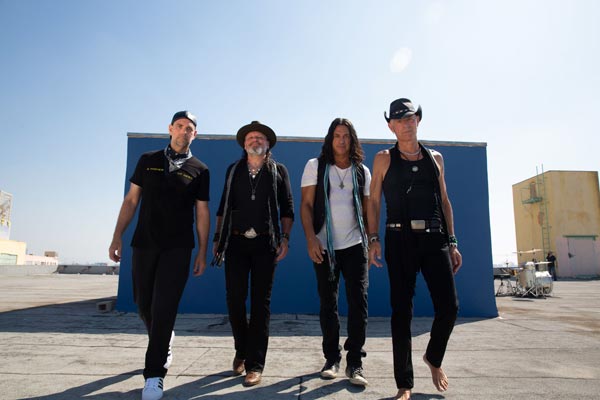 There are various schools of thought when releasing a record, one could be every couple of years, another immediately on the heels of the previous but rarely does a band wait nearly three decades to release a follow up; especially after a successful debut album.

"Slammin' Gladys" is the band and their self-titled debut (Also known as "One") was released in 1992; their long anticipated second effort "Two" features Jani Lane as executive producer who has worked with Warrant and the chosen singles which they have dropped are getting exceptional reviews. So; what's the background story and why 30 years?

"We spent a lot of time at the Jersey shore years ago; very cool place and we had a lot of fun there," began guitarist JJ Farris enthusiastically. "We had friends down there and there was a band there back in the 80's called Mr. Reality and they were produced by Danny Kortchmar who did the Eagles and a really great songwriter named Gordon Brown and we used to go check them out because we were all buddies. I've played The Saint many times; first with Slammin' Gladys and I was in a band called The Tories who also played The Saint and the other place we played was The Stone Pony."

"I grew up in Cleveland and moved out here to L.A when I was 18 and all of the guys in Slammin' Gladys were originally from the  Cleveland area until we got a drummer from Pennsylvania. Cleveland was such a commercial radio type of city; they played all of the commercial songs. So, Bruce was on the radio every second and so was J. Geils along with Boston, Journey; I could just go on down the list. I mean, all of those really popular things from the greatest time of music the 70's and 80's; those great songs were just pumped into our brains. Springsteen just blew me away; every time I see the dude he just blows me away, he's outta control; he's amazing."

OK, now we know that "The Boss" had some influence back then, so; how do they come up with a name like Slammin' Gladys?

"We were looking for a name and we had this guy Brian who went on the road with us doing our tech stuff and we were in a room and Gladys kind of came about because our drummer was a huge Elvis fan and that was Elvis's mother's name and I think Brian was the one who said, "Slammin' Gladys" and we all just kind of looked at him and said, wow. We thought it was kind of cool and the label liked it so we kind of went with it and the cover of the first album gives the name a lot of clarity."

Thirty years is a long time for a band to be together let alone decide to put out a sophomore recording; why now and what prompted the decision?

"This is the follow up to our first album which we did in 1992 and it was called "One" or "Slammin' Gladys" and we were signed to Priority Records who had NWA, Ice Cube and all that really cool stuff that was happening at the time and they decided to take on a rock band and a few other bands and it was a good experience, we got to make an album."

"We formed in '89 and did the album in '92 so, we've known each other for gosh, 30 years. In between the first album and the second album everyone kept in touch and has done their own musical journeys. We decided that we wanted to get together and do a couple of songs just for fun and a good time to see what we come up with and we ended up doing nine (laughs); we didn't realize that we were doing it until we started. We recorded the drums and the bass in a great room out here in North Hollywood called Analog and Digital Recording with a guy named Doug Messenger. The Foo Fighters, Incubus, No Doubt; a lot of really cool bands have gone through the doors there and done some kind of work. So, we went there because it has great gear, really good mic pre-amps and a guy named Nick Rutger was the engineer; a great engineer; we have a great team over there so we did all of the drums and bass there.  After that we took it back to my place because I have a studio here  and we finished all of the guitars and vocals and mixed everything here and finished it here."

It has been said that music makes the world smaller, however, in this instance Farris is the producer; how did Lane get involved?

"Our bass player Al Collins played with Jani Lane back before Slammin' Gladys in a band called Plain Jane who were playing on The Sunset Strip before Warrant and they had a couple of the Warrant songs that they had been playing in Plain Jane and from what I understand they are in the process of taking the demos of some of those Plain Jane songs and are going to be re-releasing them as an album; so, that's something to look out for."

When putting your first recording together in literally decades there's bound to be some creative differences but couple that with a year-long quarantine and it had to be interesting to say the least; not so says Farris.

"It's all different now; some of the songs initially started like "Dragon Eye Girl" and "Toxic Lover;" when I went back to my parent's house in the summer of 2018, Dave our singer came over and we decided we were going to write some songs and we hung out in my mom's den. "Toxic Lover" I had already kind of started, I had a good road map for that one but "Dragon Eye Girl" was spawned that day as well and it was cool because those two songs kind of really got the momentum going and then we kind of filled in the gaps with a couple of songs that were older songs we had done that we never thought would see the light of day so, we brought a couple of the archives back. We have a video for "Dragon Eyed Girl," it is up online on YouTube and we have a second video for a song called "Hold Up My Blue Sky" is just finishing up and should be out soon. We reconnected with our video director and producer who we worked with back in the 90's because we had done a couple of videos from our first album; his name is Eric Middleman and we got a chance to work with him. We basically went on a roof in downtown Los Angeles and we shot both videos for the live performance stuff on top of this roof; one with the city of Los Angeles as the backdrop and the other just a different type of space but it was great! We were real efficient, we got up there one day and spent four hours and got two videos worth of stuff; we're finishing all of that now. So, we have a video for "Toxic Lover" planned and another one for a song called "Durango;" we're gonna round it out with four or at least that's our plan at the moment. So, we're going to release these videos and keep that going to help people learn about Slammin' Gladys. We want to eventually get some shows going and we've already started working on the next album; we already have a handful of songs that we've been tossing around and we are eventually going to get to the point where we'll look at starting recording; we're gonna keep this train going because it's a lot of fun."

Videos, singles and according to Farris an, "Album out now on Merchbucket.com or on our site at SlamminGladys.com" and with all of that going on; what's next?

"Lead vocals is Dave Brooks, on bass is Al Collins, on drums is Steve DeBoard and myself, JJ Farris on guitar and we are starting to get a couple of offers for the summer in the mid-west from clubs that we know of or that are aware of us and are aware of our album. There's starting to be a little bit of a buzz on shows and we're starting to get offers and we have to now find out what will be feasible because two of us are in Los Angeles and two of us are in Ohio at the moment. So, we're going to figure all of that out but yeah, we're looking forward to playing shows; no tour planned at the moment but we're looking forward to getting this thing started."