Enter the virtual space to experience McCarter Theatre’s The Manic Monologues and, accompanied by gentle music, you approach a mobile of silhouettes—a dancer, a sax player, athletes, a woman carrying an umbrella. Click the silhouettes to see their stories performed.

In one, an actor portraying a Stanford University Ph.D. candidate relates the harrowing time he went to the top of the parking garage fully intending to jump. A last-minute phone call saved him from taking his life, but this was just the beginning of his battle with mental illness. After hospitalization, he struggled with feeling the prescribed meds made him a person he wasn’t.

A click on another silhouette opens a tale about an attempted suicide, this one told as a letter to a son. We watch hands scramble eggs, chop fresh green herbs, and cook an omelet in a cast-iron skillet as this mother questions her thoughts and actions before her child.

It’s a lot to take in, and so, between monologues, the site offers opportunities to process: doodling on an Etch A Sketch, making music, even writing your own story.

You’re ready to move to another: A sculptor, busy turning a hunk of clay into a distorted human head, tells about his father’s attempt to fly, and how the brilliant and accomplished Princeton professor hid his mental illness from his son. In another, the captivating Bi Jean Ngo, seen recently in Theater Exile’s Sin Eaters, portrays a 12-year old who hears voices, and her challenge getting diagnosed in a family whose culture believes such voices are a gift. 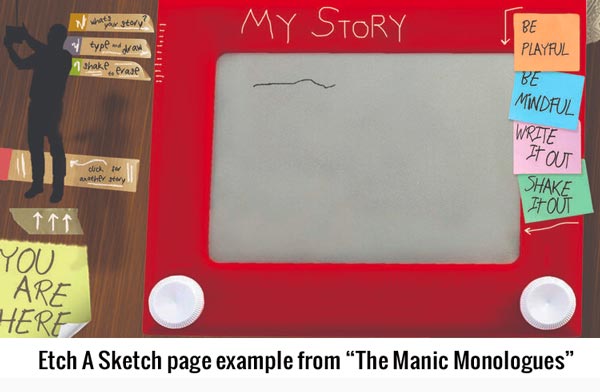 These are among 21 true stories in The Manic Monologues, a collaboration between McCarter Theatre Center and the Lewis Center for the Arts at Princeton University, as well as Princeton University Health Services, The 24 Hour Plays and Innovations in Socially Distant Performance.

The project comes with an ambitious agenda—to provide a theatrical experience relevant to our times, in an online format with interactive and participatory features, simultaneously providing a place for dialogue, healing, and destigmatizing mental illness. A virtual resource guide includes links to support, as well as books, articles, and research, and interviews with leading mental health experts and advocates.

Even before the global pandemic, one in five adults was living with mental illness, according to the National Institutes of Mental Health website. The mental health effects of the year in lockdown have yet to be fully studied, but the isolation from the closure of educational institutions, work places, and entertainment venues has taken its toll on the psyche. A review in the Lancet said that separation from loved ones, loss of freedom, boredom, and uncertainty can lead to deterioration of mental health. Children and teens, unable to see friends, experience sadness, difficulty concentrating, changes in eating habits, and pain and headaches. The elderly may experience sleep differences and emotional outbursts, and health workers are at particular risk for suicide. 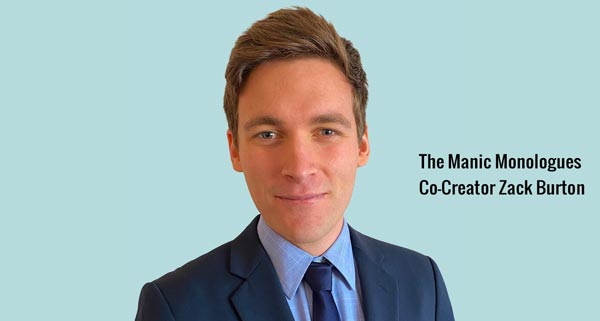 The Manic Monologues was conceived as live-staged readings at Stanford University in 2017, first performed in 2019. Zack Burton—he’s the Stanford Ph.D. candidate in the monologue described above—and his then girlfriend Elissa Hofmeister created the production as a way of coping with his bipolar disorder. Inspiration came from Eve Ensler’s The Vagina Monologues, which sought to remove the taboo on female sexuality.

When a McCarter board member presented the idea to Resident Producer Debbie Bisno, she took all of a minute to say “yes.”

Bisno joined McCarter in 2016, leaving Broadway to work with then Artistic Director Emily Mann. “I’d admired (her) for so long, at one of the country’s leading theaters. I felt I had hit the creative producer jackpot.” (Mann retired from McCarter at the end of the 2019/2020 season. Sarah Rasmussen has since stepped into that role.)

She went on to say that she was the right person for The Manic Monologues, because of both her passion for out-of-the-box ideas and her own experiences with depression in college, when the stigma she perceived against seeking therapy made it more frightening.

McCarter had planned a professional staged reading for a single night in the 1,000-seat Matthews Theatre, but when the pandemic changed the way live theatre could be produced, the project was re-conceived for the virtual stage. 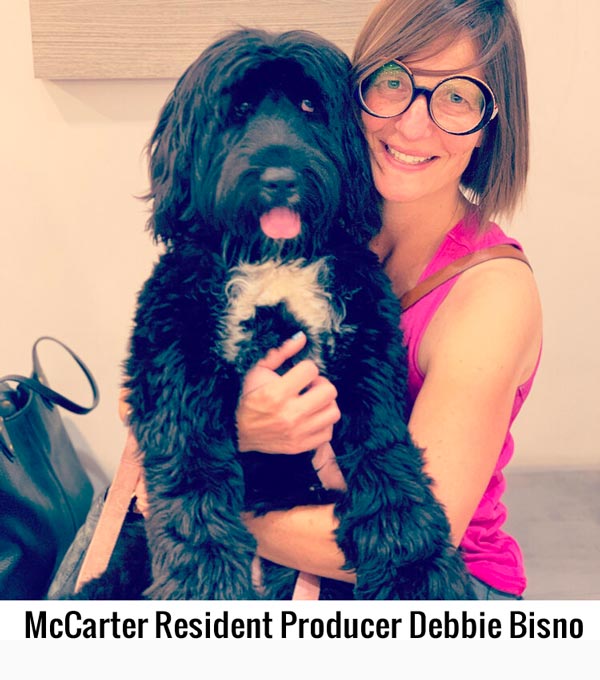 “I knew that (director) Elena Araoz had launched her new lab, Innovations in Socially Distant Performance, and I was a fan of her directing and her mind,” said Bisno. “I pitched the idea and thankfully she said ‘yes’ and led me to the team of designers she felt were right.”

“The interactive, choose-your-own adventure format at McCarter is worlds apart from the two-act, sequential arrangement of the stories at Stanford,” said Burton. “Each actor’s connection to, interpretation of, and presentation of each story also varies considerably. What remains strikingly constant is the raw power of these brutally and beautifully unashamed true stories.”

Burton, who successfully completed his Ph.D., continued, “Not only can you live with a mental health condition, but you can thrive and be extremely capable and accomplished and lead a family life.”

In true pandemic fashion, Burton, Bisno, and Araoz never met in person; all their interactions happened via video chat.

“It was important to me that we add stories that speak to this unique time,” said Araoz. “Our lives are quite different as our communities wrestle with a pandemic and continued racist violence, among other traumas. We opened submissions to Princeton University students, faculty, and staff. We set these true stories intimately inside people’s homes and environs. We hear the vulnerability in the stories and perceive what it means to live with or overcome mental illness while meeting the daily demands of life.”

A silver lining of the virtual production is its wider reach. Bisno has heard from viewers as far away as Barbados. 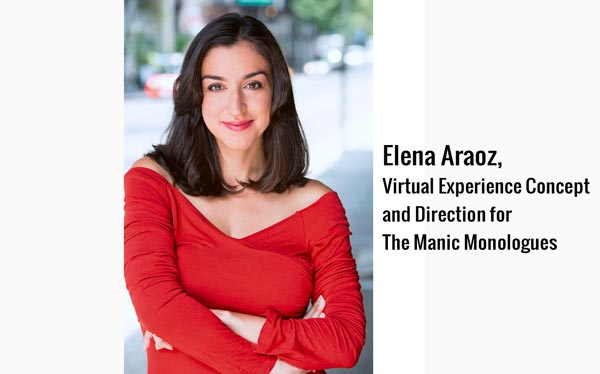 Additionally, Araoz noted that, “Audiences can decide what content is too much for them and skip it; mental health resources are a click away and easy to access; audiences can creatively begin to tell their own mental health journey in an anonymous and safe way; and the cast size can be bigger than most modern stages accommodate.”

She is reminded “how universal these experiences are. Any audience member can find a personal resonance in all of them—if not directly, then the viewer is reminded of a student, a child, a parent, a friend, a co-worker, a neighbor. These conversations are necessary because they need to happen everywhere.”

Bisno said she is grateful to have gone through depression and, with her doctor, found the right balance of medication. While some may worry that medication may dull creativity, for her, “Nothing could be further from the truth. I’m a better producer and have a more creative mind. Accepting it and working through it can make you stronger.”

How does the McCarter team perceive live theater in a post-pandemic world?

“I think there is an appetite for returning to live theatre and entertainment,” said Bisno. “I also think people will want options and virtual programming isn’t going away. It’s our job to figure out how both can co-exist and not compete.”

“Theatre will be drastically changed—at least I hope it will be,” said Araoz. “I think theatre makers have been considering how our art form can be of greater service to our communities and questioning how we can stay essential to public discourse. I’m very excited to return to a re-imagined field.” 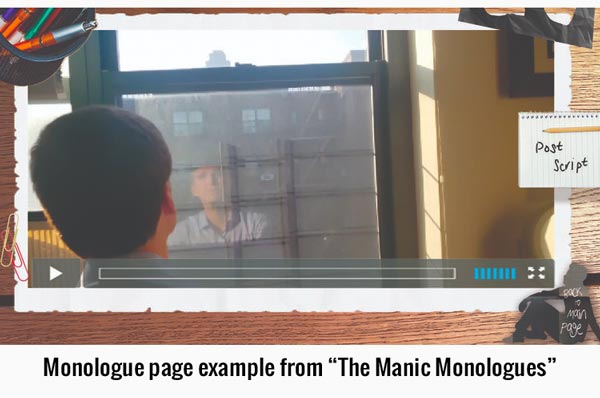 The Manic Monologues are available now at www.mccarter.org/manicmonologues. This experience is free to access anytime, no registration required.


originally published: 03/31/2021
About the author: Ilene Dube is a writer, artist, curator and filmmaker.
Content provided by Discover Jersey Arts, a project of the ArtPride New Jersey Foundation and New Jersey State Council on the Arts.