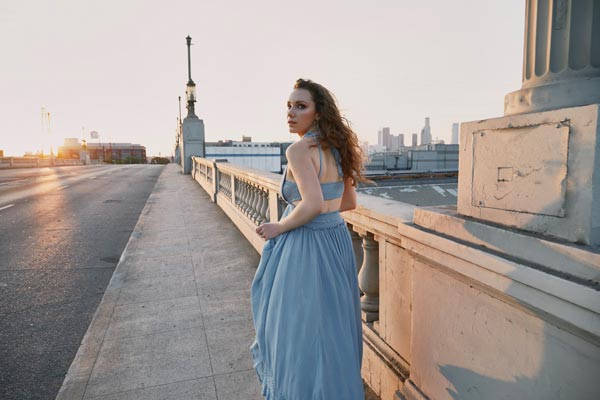 Emily James began what is a very promising career by writing her first music at the tender age of just 10 years old. Claiming influences ranging from classic rockers like Bob Dylan and Fleetwood Mac to recent pop such as Adele; James is that rare combination of driven and passionate yet possesses a softness that makes her the real deal; genuinely likeable with innocence that draws one to her like moths to a flame.

With EPs and full length CDs to her credit, along with a well-rounded support system; James has released another EP titled "Wanted You to Know, Pt.1" which debuted in February of this year. She elaborated on the new music, the troubling times and how they are both connected; not only to each other but to all of those who listen to the disc as well.

James delved into her inner-self with this particular effort and along with some co-writes has produced something she is very enthusiastic about; in part because she has also stepped out of her norm with one particular track.

"I'm really excited to have this out," she said excitedly. "The EP is kind of a collection of songs that I had created individually but I wanted to put them together because I felt like the common thread between them was me looking back reflecting on the past, meditating on the present and looking towards the future and that's why it's called, "Wanted You to Know, Pt. 1;" it's all just kind of some of the things that I wanted to say. So, yeah, "don't fall on me" was one of the collaborations; half of the songs were solo writes and half were collaborations and that one has a bit more of a rock sound than the others and it was kind of different than what I've done in the past; I thought I'd try something new."

When asked how she crafts her material, she says that she uses an open-minded approach; especially with "don't fall on me."

"I think it's mainly about; I never really go into a song whether it is writing it or producing it with an intention; I want to frame the songs in the way they're it is supposed to be and treat each individually so that I can honor each song's unique personality. So, for that song I just wanted to make sure, because the content of the lyrics is kind of a battle between the dreamy blissfulness of falling in love but also the fear of not being able to get there with somebody or not being able to give them enough. So, I wanted the production to kind of reflect the angst and the fight between those two feelings."

"There is always a piece of myself in everything that I write," she continued, "It differs how much of that is in there for each song but again, I want the song to have its own life and for people to attach their experiences to it because once I release a song it's not mine anymore; it's the listeners and they are going to have their own life with it; I like to think of it that way. I just hope that my songs can kind of provide something for somebody; see me as a friend that they can talk to or one who is listening because sometimes we have feelings inside that are hard to express or find a way to relate to something and I think that music is so powerful; it's always there for us no matter what we are going through to help us through it. Whether it is a celebration or a heartbreak or feeling lonely; I would just hope that my music will provide that for someone to turn to."

During these COVID times recording artists have been forced to adapt to a seemingly ever-changing landscape. James was no different as she went about putting this EP together.

"It was a combination of recording it in my room and wherever the space was that I wrote the songs with my collaborators. There are six total tracks and I've released four of the songs as singles and then the other two came out when the EP was released on February 26."

So, now that the EP is out and as the world begins to return to pre-virus normalcy; what are her plans as she looks to the future?

"I want to create more and hopefully when it is safe to do so; I'd love to get back to performing live and travel to different places to perform. I'm just looking forward to trying out new things with my writing and production and keep creating and once things are safe again just get back to living. I hadn't made any plans to go out on the road yet but I'm hoping to in the near future and I feel very fortunate that even with the pandemic that I was still able to work and create and put out music. I think the hardest part is that I wasn't able to see family and friends that I wasn't living with but if that was my biggest issue I feel very fortunate."