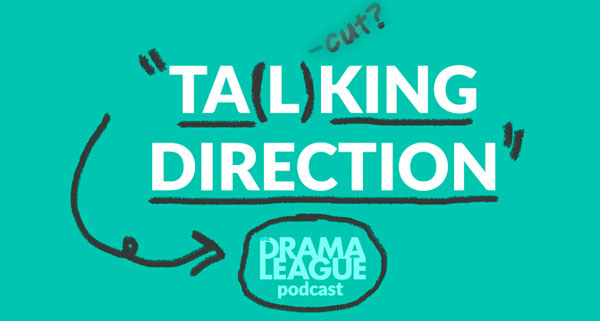 (NEW YORK, NY) -- The Drama League has announced Season 2 of its digital series, TA(L)KING DIRECTION: The Drama League Podcast. After a successful first season of 25 in-depth interviews addressing the stories and experiences of world-renowned artists during the COVID-19 pandemic, season two will explore the changing state of the theatre industry and its early steps towards re-emergence in 2021, with an all-star lineup of directors, producers, and artists in conversation with the industry's leaders and educators. Since 1916, The Drama League has been at the forefront of the American Theater community, advancing the art form by providing a life-long artistic home for directors and a platform for dialogue with, and between, audiences.

"Connecting theater practitioners to each other, and to audiences, has never been more challenging or necessary than in the moment we find ourselves right now," said The Drama League's Artistic Director Gabriel Stelian-Shanks. "'TA(L)KING DIRECTION' has been one of our great joys in addressing those challenges. Each episode offers powerful thoughts from the great minds in our field, reaching thousands of people across the globe as we together share, reveal, explore, and dream a future for theater unlike anything we've seen before."

"The new season begins with 'DIRECONOMICS,' a three-episode exploration of the financials of theater and the class divisions built into its roots," said Associate Artistic Director Nilan, who also serves as the producer of TA(L)KING DIRECTION. "In this sprawling conversation, directors gather to discuss the importance of tackling inequity on Broadway including how artists, producers, and patrons can work together to create a more sustainable and just industry."

Leigh Silverman, known for directing critically-acclaimed shows on and off Broadway such From Up Here, Violet, and Soft Power, joins this riveting season-premiere episode to expand on her perspective as a female director and to sheds light on the importance of cultivating young talent in the field.

Here's an excerpt by Silverman from the premiere: "One of the most difficult things about being a director is that you don't have a deliverable, you need all kinds of other people. You can't just sit in your room and practice your instrument, you can't work out, you know, to stay limber. You need people to keep you developing your craft. So what are the ways that young directors right now can be given opportunities and help to keep practicing their craft, so that this time [pandemic] is not emotional, financial, spiritual, professional apathy."

To learn more about becoming a member of The Drama League and the programming members fund, including fellowships, residencies, education programs, and artist relief funds, visit dramaleague.org.

The Drama League of New York, since 1916, has been at the forefront of the American Theatre community, providing talent, audiences, and prosperous support. The Drama League advances the American theater by providing a life-long artistic home for directors and a platform for dialogue with, and between, audiences. The Drama League opens doors for exceptional stage directors by providing time, resources, and space to work without restriction, while augmenting skills through personalized training, production opportunities, and professional development. The Drama League carefully selects directors whose vision and talent are unparalleled, with a clear commitment to the craft, the field, and audiences. Through our work, The Drama League celebrates the important role theatergoers have to the future of the industry, and champions the impact theater plays in civic life. The Drama League breaks the formidable barriers that impede success in the arts. These directors, nurtured and empowered by The Drama League's support, are trained to create the most rigorous work possible, as a live exchange between artists and audiences. In doing so, we elevate the conversation, deeply impacting theaters and their communities. Bringing people together to celebrate difference, share experiences, and discover common ground are crucial needs served by the work of Drama League directors. This necessary cultural practice is the foundation of our shared humanity.