Adrienne Kennedy is an 89-year-old playwright who is fierce, prolific, and considered one of American theatre’s most innovative voices. In 1964, Kennedy won the first of her three Obies for her very first play, Funnyhouse of a Negro. Her most recent play, Etta and Ella on the Upper West Side, will have its public premiere December 12, 2020 as the final presentation in The Work of Adrienne Kennedy: Inspiration & Influence, a festival presented by Princeton’s McCarter Theatre Center in partnership with Washington, D.C.’s Round House Theatre.

Despite many accolades over a nearly six-decade career, Kennedy remains little known outside of her core group of admirers. She could be called a “playwright’s playwright” — Edward Albee was among her earliest admirers. Her plays have been widely presented and studied in university settings, and she has taught at Harvard, Yale, Princeton, Stanford, and more. 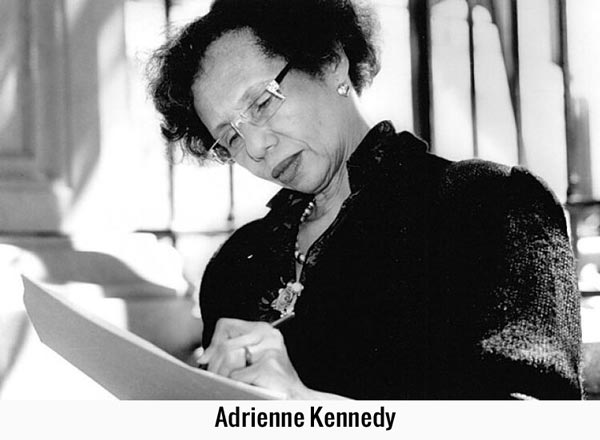 Yet a wider public awareness of her poetic, wrenching work has proved elusive. The festival’s goal, according to marketing materials, is to provide a correction—in other words: “to make Adrienne Kennedy a household name.”

Nicole A. Watson, the newly appointed associate artistic director at McCarter Theatre Center, first immersed herself in Kennedy’s plays during graduate school, leading to a friendship with the playwright herself. Watson directed the first play in the virtual festival’s series, He Brought Her Heart Back in a Box. Its premiere was November 14, but, along with the other three plays premiering on successive weekends, it will be available to stream through February 28, 2021. 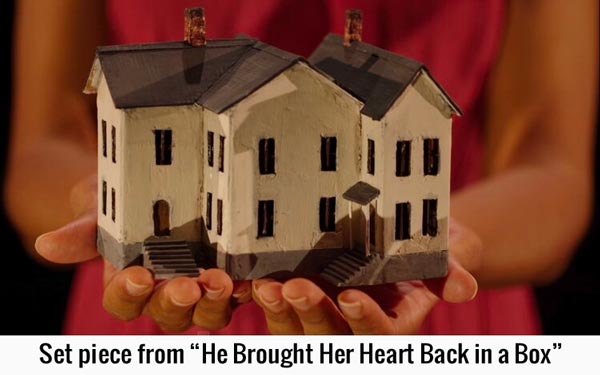 In a Zoom panel discussion prior to the premiere, Watson described He Brought Her Heart Back in a Box as a kind of love story between a white boy, Chris, and a Black girl, Kay, as told through the letters they write one another.

“I think that what they’re unearthing is the difficulty of how we keep secrets of history,” said Watson, “and the fact that our unwillingness to talk about the past honestly only perpetuates ongoing trauma for everyone involved.”

Watson, a former history teacher herself, is drawn to how Kennedy’s plays remind us that “we have to find language for the pursuit of uncovering our past and our future.” 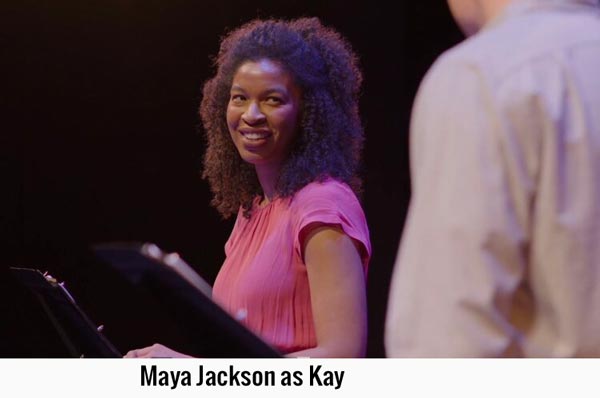 The one-act play is set in the small town of Montefiore, Georgia in 1941. It’s a place where everyone knows Kay and Chris, as well as their parents and grandparents. After arriving in New York, Chris writes to Kay, suggesting that after they marry they can live in France. But he also writes about disturbing events from his childhood that he only partially understands.

Now at university, Kay writes about her friends and sports, yet her letters are preoccupied by her mother’s mysterious death. Their correspondence builds, revealing an increasingly oppressive past that is no match for their dreams of a future together.

Theirs is a world where Black women are loved, or simply used, but never married by white men, and the children born of their affairs—like Kay—are known and despised by their father’s white wives. 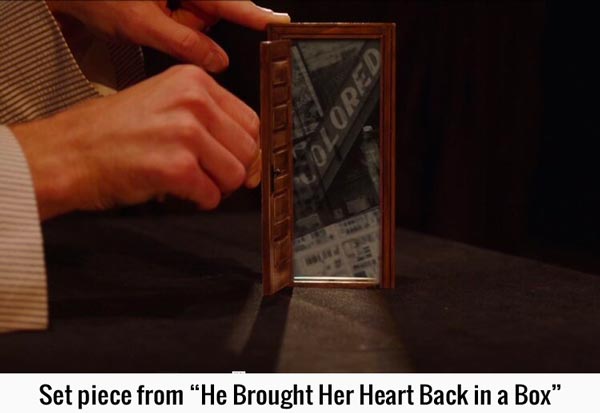 When He Brought Her Heart Back in a Box had its world premiere in 2013 at Theatre for a New Audience in New York, New Yorker theatre critic Hilton Als wrote that, like Kennedy’s other works, it was about the “ever-present wound of institutionalized racism.”

But, he said, unlike her contemporaries Lorraine Hansberry or Alice Childress, “Kennedy struck a nerve by failing to offer an explanation for it: the madness of being a Negro in America was . . . mad. Why filter it?”

The title itself, recalling the order given to the Huntsman by the Queen in Snow White, is both an actual event and a chilling metaphorical key to He Brought Her Heart Back in a Box.

Kennedy’s play is deeply layered, and Watson’s direction emphasizes its surreal and collage-like structure. Projections of photographs, set-pieces small enough to hold in a hand, and sound montages are all used effectively to deepen the narrative, using what Watson has called the “bedazzlement” of post-production.

All four of the festival’s plays are staged readings filmed in theatres around the country, with some editing after-the-fact. These virtual plays are neither Zoom readings nor films, but some new hybrid made for our pandemic times. One major benefit is that the viewer can return to explore the connections and deeper meanings to be found in Kennedy’s plays as easily as if re-reading a poem—no new ticket required.

The next plays in the series are Sleep Deprivation Chamber (November 22), a semi-autobiographical drama based on a beating Kennedy’s son received; The Ohio State Murders (December 5), a reflection by a Black writer on the sources of the violent imagery in her work; and the world premiere of Etta and Ella on the Upper West Side (December 12), about gifted scholars who are both sisters and bitter rivals.

Also featured in the festival are online panel discussions with directors, actors, academics, and performance artists familiar with Kennedy’s work. All the plays and discussions are available from their initial dates through the end of the festival on February 28, providing a chance to either sample Kennedy’s work, or to dive deeply into a seminar-style experience.

For more than 50 years, Kennedy has created beautifully wrought plays about a world that is often brutal and unforgiving to the Black men and women who are her main protagonists. Many of her stories connect to her own family history; she writes from what she knows.

However, they have not been widely produced in the past. When I asked Watson whether she sees that changing, she replied in an email, “if we assume theatre is about being comfortable or marginally uncomfortable, Adrienne’s work is not that. Her work is visionary and uncomfortable. Her work demands something from the audience and at the end of the day, I don’t know that the U.S. enjoys hearing or seeing hard truths from Black women artists.”

Perhaps not. Yet, hard truths about racism are what the times demand, and theatre gives us the space to explore its effects on our own and others’ lives.

The McCarter Theatre, in particular, has championed the work of Black playwrights over the past 30 years. Now they are presenting The Work of Adrienne Kennedy: Inspiration & Influence, a unique opportunity to experience the work of one of America’s most lyrical yet searing playwrights, as acted and directed by gifted theatre artists plying their trade during this extraordinary time.

The Work of Adrienne Kennedy: Inspiration & Influence is a virtual play festival presented by the McCarter Theatre Center in association with Round House Theatre, with access to productions and discussions through February 28, 2021.

Special Topics: The Adrienne Kennedy Experience is a class which began on December 1, 2020 that is designed as an introduction to the life and work of American playwright Adrienne Kennedy. It is intended to dovetail with the first half of McCarter and Round House Theatre’s virtual play festival. 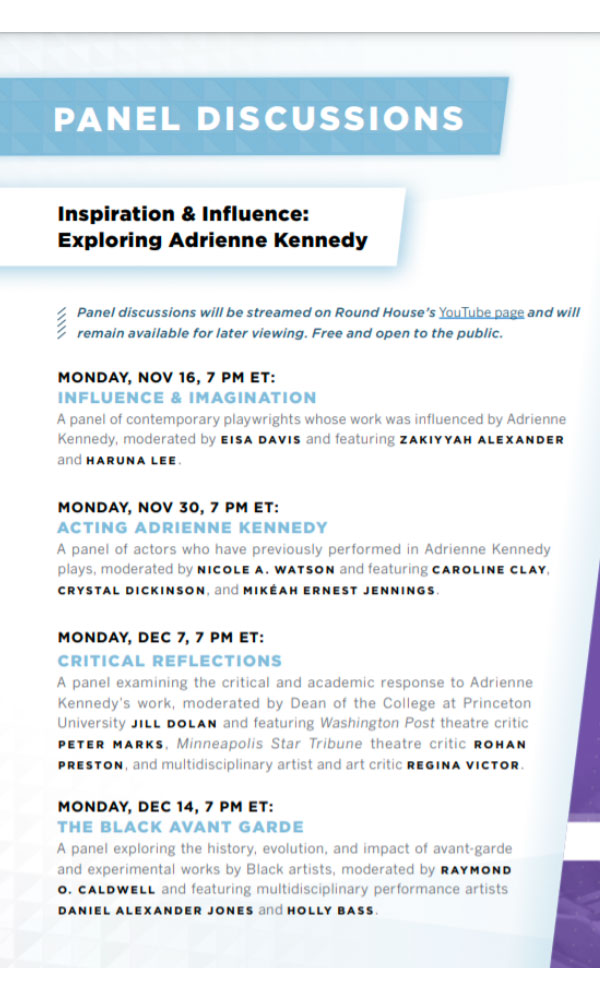 originally published: 12/03/2020
About the author: Susan Wallner is a principal of PCK Media, an independent production company. She is the co-series producer of the public television program 'State of the Arts,' a job that has introduced her to a wealth of talent and artistic diversity over the years. Susan's documentaries and performance specials have aired nationally. Most recently, her profile of the writer, aviator and celebrity, 'Anne Morrow Lindbergh: You’ll Have the Sky,' won the 2017 Mid-Atlantic Emmy for Best Feature Writing (it was Susan's 15th regional Emmy win). Narrated by Judith Light and Lily Rabe, it aired throughout the country on PBS and PBS World, and is available on DVD. Currently, Susan is working on a documentary about the self-taught city planner, builder, and artist, Kea Tawana.
Content provided by Discover Jersey Arts, a project of the ArtPride New Jersey Foundation and New Jersey State Council on the Arts.