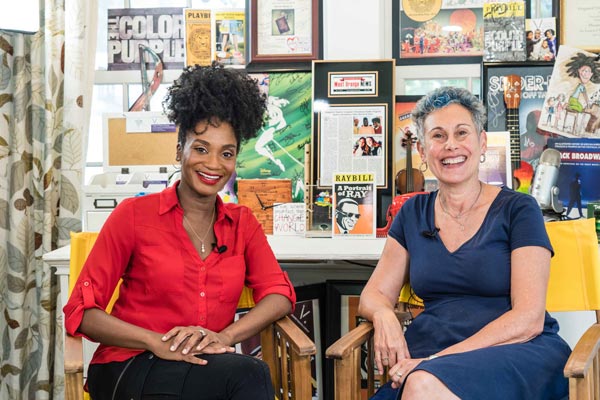 (MONTCLAIR, NJ) -- “How can we help level the playing field for a new generation of diverse, behind-the-scenes, creative, technical and production theater workers?” Vanguard Theater Company Artistic Director and Co-Founder Janeece Freeman Clark asked herself this question when COVID-19 forced Vanguard to cancel its in person theater programs, and the Broadway shutdown and reinvigoration of Black Lives Matter caused many theater professionals to take a long, hard look at the theater industry.

Vanguard’s Broadway Buddy Mentorship program, which streamed nationally this year on BroadwayHD to benefit The Actors Fund COVID-19 Emergency Relief Efforts, was created to provide equitable mentorship opportunities to aspiring professional performers. For the last five years, the program has paired 30 aspiring performers in a one-on-one mentorship relationship with Broadway performers, culminating in a one night only cabaret performance.

Clark decided to take the Broadway Buddy model and bring it “backstage,” under the umbrella of VTC NEXT.  “It was a natural progression for Vanguard,” said Clark. “Since we founded in 2015, we have successfully used a shared commitment to theater to break down walls and stereotypes, and train young artists to use their gifts to be, and create, the change they wish to see in the world.”

The first VTC NEXT program is a musical development workshop led by established composers/lyricists Alex Ratner and Lawrence Dandridge, working with 15 teens to create an original song cycle, guided by Clark.  Participants include students from all over Essex County. Olivia Ridley describes how the process has been healing, as the students create “a collection of songs about our personal experiences as teenagers over these past strange months.”

The second VTC NEXT program is training the next generation of production and creative teams; teens, mentored by professionals, work with professional actors to stage and perform a concert production of “Nightmare Before Christmas.” Mentors include Terri Purcell (Wardrobe Supervisor, Mean Girls) Terri Gorgone, as Music Supervisor, and Lawrence Dandridge.  Patrick Swailes Caldwell, one of the professional actors involved, states that Vanguard’s commitment to diversity and accessibility were why he wanted to do a project directed by students.

Clark explains, “The traditional pipeline for training ‘behind the scenes’ professionals has not always offered opportunities for women and people of color to be mentored by Broadway professional composers, lyricists, makeup artists, producers, costume designers and other backstage professionals. Just as our Broadway Buddy program seeks to address this for aspiring performers, VTC NEXT gives mentorship opportunities to ‘behind the scenes' theater kids, to create a pipeline for the next generation.”  Clark speaks more about her inspiration for creating Vanguard in this video.

In addition to the two VTC NEXT® programs, Vanguard Theater Company is moving forward with a mainstage production of Jason Robert Brown’s  Songs for a New World, Disney’s Shrek Jr., and renovation of its new theater in Montclair, NJ.  As a recent article stated, Vanguard won’t let COVID-19 kill the DREAM.

Co-founded in 2015 by two Black artists/educators, and with over a 50% BIPOC Board,  Staff, and participants, Vanguard Theater Company is a unique 501(c)(3) committed to changing the narrative through theater dedicated to DREAM: Diversity, Reciprocity, Education, Activism & Mentorship.