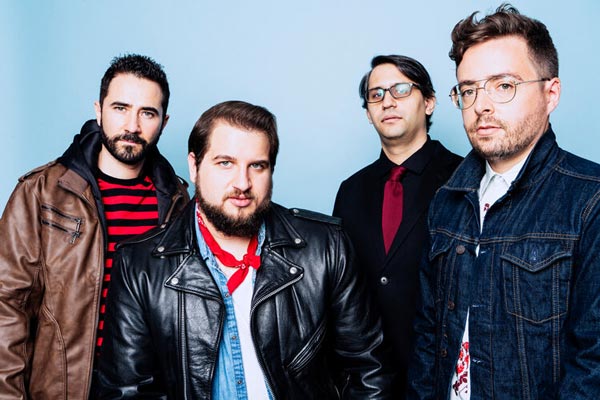 "We're all from New York City but different boroughs. I'm originally from Massachusetts, Julien Budrino our drummer is from France, Martin(Stubbs) is from Pennsylvania right outside of Philadelphia and Marley Myrianthopoulos our bass player may be the only one who is actually from New York City; I rehearse more for his name than I do the music; it's always fun to say that on stage depending on how many beers I've had,"said a laughing Chris Paine guitarist and lead vocalist of The Midnight Callers as he and lead guitarist/vocalist Martin Stubbs spoke of the band's origins, Jem Records, their new album and more.

A blend of power pop and rock along with a hint of punk permeates their compositions; old school 80's meets the 90's. A big sound without the techno electronics which produces an honest, straight forward style that is both catchy and refreshing.

As stated, the band finds themselves currently based in New York City but how did they come to be a unit and develop their sound?

"We started because Julien and I were in another band; kind of a 60's mod rock thing; it was kind of a set parameter as far as songwriting and styles,"explained Paine."I just happened to be driving to a gig one time and I said, hey I've written a couple of songs but I don't know if they're going to be good for the next album and Julien said, "Hey these are pretty good; we should do something with it," so, we started developing this album together and kind of recording it. I'm not the greatest lead player in the world and I can fake bass, so we had to kind of start building the team up as we went along. So, we started recording an EP, started playing shows under Chris Paine and The Letter Train which was kind of our moniker for whatever fell into this weird side project. Again, I wasn't that good of a player so we put an ad out on Craigslist and listed off some influences; I love The Beatles, Tom Petty, Cheap Trick and I mentioned Big Star; that's where Martin came into the equation. He actually answered the ad saying, "Anyone who mentions Big Star; I'm in" and that's how Martin ended up in there and then it was the same deal with Marley. We got him on board and when we all started to play together, we were like, OK, this isn't just two guys side project while playing with another band; this is actually turning into a full-fledged band. So, then we started going back and forth on names and decided on The Midnight Callers after the Badfinger tune."

Now fully assembled, they, like many others decided it was time to record. However, the band does not have a lengthy history in terms of time together but what they do have is a product that has taken up quite a bit of the time in which they have been working together.

"We've been together about three years now and it probably took us a solid six months of straight recording to get this done,"continued Paine."We brought in Kurt Reil from The Grip Weeds to help co-produce and arrange the vocals because we really wanted to up our game a little bit. When we started doing this, we kind of all thought to ourselves, we don't need to spend crazy money in a studio, we've got enough technical ability, we can probably do it ourselves. We started talking and we said, if we're gonna track drums we need a big ceiling, that big drum room to get that big JohnBonham sound or whatever it is."

"We did a lot of it DIY, we tracked the basic drum tracks and rhythm guitars up at Chris's parents place in Massachusetts," added Stubbs."They have a beautiful A-frame and a great sounding drum room. So, we went up there, took up mics, a recording console, our laptops and did all the basic tracking directed to Logic there. Then over the course of the next few months we did guitar overdubs, guitar solos, acoustic guitars and then to get the vocals right we went to Kurt Reill of The Grip Weeds at House of Vibes. He's a master vocal producer who helped us pull the harmonies together, helped Chris finalize the lead vocals; it was a multi-stage process and not a traditional go to the studio and record an album type of things. He also did all the mixing and the mastering; once he dialed in a sound that we liked he mastered it from there. You've got to give it to Kurt, this was one of the first times recording our own music and we did not serve him up the best possible guitar tone or placement of drum mics from an audio perspective; we owe a lot to him for the way the record wound up sounding and the quality he was able to produce."

The album was released only recently and they had the good fortunes of catching the ear of Jem Records President Marty Scott whose input created a little extra on the disc.

"Red Letter Glow"is our debut record onJem Recordsand was released on October 23 and it can be found on all of the usual sites,"said an excited Paine."There's 10 official tracks and one bonus track which was kind of Marty from Jem Records who was really pushing for that." "Earlier this year after Bill Withers passed,"chimed in Stubbs," We were all huge fans of his, so we did a cover of "Use Me" and put it out on our YouTube and social sites. We did the whole thing ourselves; we recorded it and mixed and mastered it ourselves and Marty said, "This is great! You should put this on as a bonus track" and that's how that kind of wound up."

How did they catch the interest of Marty Scott anyway?

"That connection came from working with Kurt," continued Paine." He had the tracks and we were just finishing the harmony vocals and a couple of YouTubers had posted some videos of us and talked about our live shows and Marty got wind of us and when he found out we were working with Kurt he hit him up and said, "Hey; what do you guys think about sending me over some rough mixes?" "So, he took a listen, he liked what he heard, the next day we had a phone call with him and I think the next day he sent over the paperwork and we signed with them. We were so ecstatic that a label like Jem, with all of the history they have was interested in us, so we jumped at it"

"Red Letter Glow" is a unique title and one which is somewhat open ended but as Paine explained; it's not that mysterious.

Even though Chris and Julien have a history of working together, Paine says that he and Stubbs are the writers; well sort of.

"I mean for the most part, it's us two. The thing I always caveat with is that Martin and I will kind of write the songs out, hash out how the flow is going to go and the other two guys add their own spins on it that elevate it to a different level that neither of us could have expected. A good example is, we sent Julien a demo track to "41 Miles To Roscoe" which is our lead single off the album and we were playing robo-drum machines just to keep time and Julien sent it back to us with this powerful kind of drum intro where he was smacking the hell out of the snare and it made the song; so sometimes the songwriting is important, the actual words and melody flow but sometimes it's those little extra things that make the song. Just putting a little nuance or beat can make the song or make it a totally different song that works."

Stubbs is in complete agreement with his band mate but also realizes the importance of staying within a song's structure no matter who gets the writing credits; many others would be wise to adopt his approach.

"Lead guitar for me at least,"he started slowly, "It complements the song so the sort of highest power if you will; is the direction of the song and where it goes, how it flows and fits around the vocals. I think a lot of times that lead guitar parts get written to complement the melody or a specific feel of the song; I'm not a fan of gratuitous solos or over-shredding if you will."

With the album's release in October the band now faces the challenge of gaining the favor of audiences in a closed COVID environment but they have a plan.

"I think obviously COVID has put a damper on things in terms of playing live but for us we're trying to be a creative as we can possibly be; we've been trying to find shows at breweries and we are trying to be outdoors as much as possible," said a hopeful sounding Paine."We're also finding opportunities to do livestream concerts; we did a livestream to celebrate John Lennon to coincide with the Jem Records release so, yeah, we're just trying to find ways to engage the audience. Live is great but we're also trying to record some more live videos so that way you still kind of get the sense of how we are live but obviously everyone has to stay at home right now and do their part so for the time being we're sticking to social and video outlets for now."