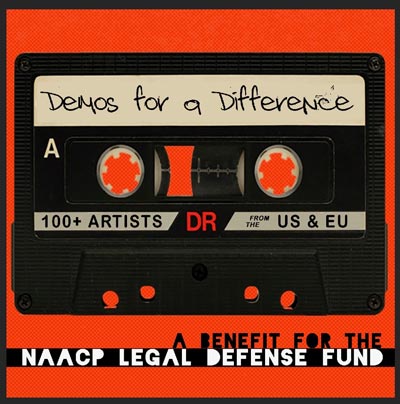 "We have everybody involved," said Brian Erick with a laugh as he elaborated on his latest endeavor, "Demos For A Difference." "It's a fundraising compilation and it benefits the NAACP Legal Defense Fund; we have just a shade over 180 artists involved. There are plenty of people from our area; Dave Vargo, Renee from Lowlight, Tara Dente, Mark Tappan, Bobby Mahoney are all involved and that's just off the top of my head. We have artists from New York City, from across our country, we have a couple from Europe and I say artists because it's not just musicians. We have some spoken word, poetry; a lot of interesting stuff here."

In the Jersey Shore area music scene, there are movers, shakers, donators and trend-setters; there are givers, takers and those who just go with the flow; fortunately for us, Erick creates the flow and when he does there are many who are glad to ride the wave.

Recent events struck a nerve with the man known as "Red Pants" and in typical fashion he chose to do something about it. Using his standing and connections in the music communities he frequents; he has assembled an outstanding collection of "Artists" in an effort to raise not only funds but awareness.

"This kind of came together rather quickly, it came together in two weeks," he explained. "I started doing outreach a little bit before then, maybe three weeks prior. I wanted it to be big but initially only expected about two or three dozen local artists; which would've been cool, 35 or 36 people but 180? I'd say it definitely went and made the rounds (laughs)."

"It started here in New Jersey and word of mouth and kind people from the press have helped us spread the word around; in terms of Jersey based artists, there's also Levy & The Oaks, Stella Mrowocki, Joshua Van Ness and 173 more. The project went active two or three months ago and the response has just been overwhelming. We did individual outreaches, just kind of like hey this is what we are trying to do here; the response speaks for itself. The numbers speak for themselves; people seemed very happy to want to do something."

What they did was donate time and raw recordings. The Jersey Shore music community has stepped up and literally bared their collective souls to the public by submitting these un-mixed, un-mastered demo recordings. These are the kind of songs which normally go un-heard by anyone other than the artists themselves or their trusted collaborators; yet they have freely given them to this project.

"We told all of the artists; we did not ask for any kind of exclusivity on these songs so the artist can take them and do whatever else they want with them," stated an elated Erick. "We figured that might work in our favor in terms of keeping everything complete and on this site forever. These songs were all individually done and because we were on such a time crunch; we could have maybe picked a different release date but it seemed that Independence Day weekend seemed appropriate and that way too, we were able to amass a large collection of songs and tracks in a pretty short amount of time. You're going to get some things that are kind of rough studio cuts, some fuzzy rehearsal room recordings, some are people singing into a tape recorder; it was "Demos" for a reason. We asked people to submit demos for a specific reason because usually people just have them kicking around and they don't always plan on releasing them. So, we said, OK give us something you already have; you don't have to put yourself under pressure to record something new for this, just take something you've already got; it was able to get us almost 200 songs in basically two weeks. This took a little less than a month from conception to birth and a lot of the tracks are coming through as is; it's not a collection that has been mastered, it's pretty much as the artist has given it to us. We just make sure it is in the right format; if it's a little quiet we might get in there and boost the volume a little bit or something like that but we're not getting in there and mastering the tracks. Maybe with more time we would've but we felt the immediacy of it might be a little more impactful."

Erick is modest when he speaks of how the project came to be and is very appreciative of the support he has received from literally all over the world.

"All I really did was send out some e-mails and texts to a bunch of people; the project doesn't exist without the artists involved. I say "We" in terms of, I'd reach out to one person and they'd reach out to one or two people and it's kind of snowballed like that. I reached out to Levy and next thing I know Lou their bass player sent something over and Natalie Farrell who they perform with all of the time sent something over, so that's what I mean by "We" because everybody responded very positively. Maybe I sent the first few messages out there but it's been a collective effort. I have had specific help from Hana Denson from the band Honey Wild; she's been running our social media sites and helped with the direct outreach and Bill Greenwood and Jaybird Communications who are based in New York have been helping with press. So, in the office is kind of like a three-person team; I don't really feel comfortable taking full credit for that because a lot of people have spread the word."

Thus far the compilation has gotten more than 4,700 listens and raised approximately several thousand dollars in its first five weeks; Brian feels the potential is limitless and once again looks to those who contributed.

"If you look at it from the participant perspective, you're always under pressure to sell tickets or sell merchandise but from a participant's standpoint; if each one can get four people to buy this, we will raise over $10,000. So, obviously we want to raise as much as possible but even if each artist only gets returns in the single digits the amount that we can raise is really, really impactful."

The undertaking is huge and is Erick's primary focus; so much so that he has put his band and solo efforts on the back burner until the fall as the cause continues to gain momentum. There is a livestream event planned for August 26 at 7 p.m. Eastern featuring various "Demos For A Difference" artists and more in the works; so, where can we get these recordings and what's the cost?

"It's a Bandcamp exclusive album. So, if you go to Demosforadifference.bandcamp.com the album is live and you have the option of paying $10 for the entire collection or you can download individual songs at a dollar apiece if you prefer. There is also an option where you can give a little bit more if you want but we're only asking $10 for this massive collection of songs."

To find out more about "Demos For A Difference" please visit their Facebook page at https://www.facebook.com/demosforadifference/ .