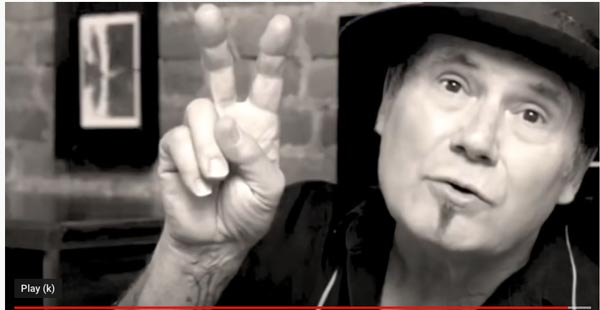 "What We're Made Of" is an older song but during the pandemic we kind of decided to do the whole social distancing Zoom thing," says American Nomads keyboardist and co-founder Walter Kenul (Pron. Kennel) with a laugh as he discussed the band's recent release of two older singles which are very relevant in today's world. Richard Humann our lyricist thought of it and we all agreed; it turned out great and we're very happy with it."

"What We're Made Of" is meant to be a song of inspiration in these times of uncertainty but Kenul says even though its roots are in Americana music; it had a European conception.

"The song was probably written about four or five years ago. Richard was over in Venice and I'm from Croatia and I have a home there, so we started it while he was in Italy and I was in Croatia and we did an Americana song which is kind of odd but that's what we did (laughs). We communicated and made it happen and I guess it's kind of funny the way it originated but it turned out great; it has that whole working-class kind of thing and again we're happy with it."

Based in New York, the players are all seasoned musicians but the band itself is relatively new on the scene. Kenul explained how their small beginnings led to an expansion; one that everybody can agree was well worth the while.

"We're based in Brooklyn; we are seven pieces and we have a pedal steel player Gerald Menke when we do shows and when we record but it's pretty much a seven-person band so yeah, it's a full house. We actually started; well it kind of started when I was in Europe with Richard. I had kind of stopped playing music for a while but that kind of inspired me to start again so I went back to my long-time friend Dante DeLemos who is a brilliant guitar player and songwriter and we actually record at his studio. So, it was Richard, Dante and myself; we started writing songs, recording; pretty much a concept kind of group. We did a song with Joe Vulpis called, "A Revelation's Gonna Come" and that hit number six on the country adult contemporary charts and was nominated for a Grammy three years ago. So that kind of got people saying; why don't you guys play out? You guys are great! We kind of brain stormed and we started gathering some acquaintances that we knew and formulate a band; American Nomads; which is Susan Darmiento also a lead vocalist, George LaGrange a second guitarist, Jay Rivera on bass, Joe Conoscenti on drums, Joe Humann on harp and Gerald Menke on steel pedal. We've been doing a lot of gigs at top clubs in New York, we also played last year at the 50th anniversary of Bethel Woods on the same bill with Ringo Starr, Blood, Sweat & Tears and Edgar Winter so we were very fortunate to get that gig thanks to our buddy Ken Franklin; thank you Ken. That kind of put us on a different level to be there and that really inspired us to continue writing and gigging and that's where we are right now."

Seven pieces can be tough to manage; musicians are not ones to rest on their days off so keeping everybody on the page and focused isn't always an easy task. Kenul says this group is more like a big family than a band and that's in part due to his unique living arrangements.

"Years back I bought an old fire house in Brooklyn and we rehearse there because there's plenty of space. We have a great situation and it's a great place to rehearse and I'm very fortunate to have a wonderful wife who cooks for us afterwards," he said with another laugh. "So, we have a band dinner afterward and then we just kind of talk about the rehearsal, future gigs, songs and just about anything; it's a family atmosphere and a perfect situation for us. Knowing that it's very difficult for people to have bands in the city; rehearsing, a home front, recording, it's very difficult so, again we are very fortunate to have this situation happening for us."

Old fire house in Brooklyn? The thing he failed to mention is that this old fire house has a very musical past; Cyndy Lauper, The Eagles and more have visited its interior.

"Originally when I bought it, two friends of mine had a sound company; Brian Olsen and Kevin Hartman and they started Fire House Productions being it was a fire house. They were doing monitors for Peter Gabriel at the time and Peter saw that they were up and coming and he really liked them so he put up money for them to expand. Right now, Fire House Productions does sound for The Rolling Stones, The Cure, all top acts. They are one of the biggest in the world right now and it all started there. I got to meet a lot of celebrity musicians, Dire Straits, Peter Gabriel, David Byrne; we got to meet a lot of people there and again it's like a family with a really great vibe and we hope to keep it going."

The second release, "Stronger When We're One" is said to have a, "Universal message which resonates during our time of civil and physical unrest" and was written last year; well before the current climate existed."

"Stronger When We're One" I wrote right after we played Woodstock because I was so inspired to see people coming back after 50 years, coming back to relive that magical time and that moment. They had gray hair (laughs) but everybody was so happy to be there and it was such a special moment. Those songs from the late 60's and early 70's were so great; they were peace songs and love and the whole vibe with Crosby, Stills, Nash & Young and all the people who were promoting love and peace, it was just such a great time. I said to myself; ya' know what? I really want to capture that; I really want to write a song that kind of mimics that, a nostalgic kind of sound. Something that when the chorus comes in it grabs you right away and that's crucial for me as a songwriter, the chorus is the most important because that's the part that people remember and if it's a good song they're going to be humming it the rest of the day so that's what I shoot for. Whether or not I captured that, I think I came close and I was very happy with the end result. Dante was on it, he played bass and guitar, our drummer was in the process of moving so I couldn't get him to record so I called my friend Sammy Merendino who is a fantastic drummer who played with Michael Jackson, Billy Joel, Cindy Lauper, Foreigner, Hall & Oates, the percussionist was Grant Braddock who does all the Broadway shows and is currently does "The Lion King," Hayes Greenfield played the sax; normally we don't have sax on Americana songs but sometimes you write a song that is very inspirational and you just want to make it happen and I like to mix it up once in a while. The end result was great and I was really happy with it."

With so much uncertainty around live gigs, many bands and sol artists have turned to virtual concerts, livestreams and other innovative ways to keep their product available; so what do the American Nomads have lined up?

"We're playing at the Bearsville Theater up in Woodstock, NY on September 12. We were cancelled May 9 because so we will be there then and if anyone in the area would like to come see us, they can purchase tickets at the Bearsville Theater; hopefully we'll meet some new fans over there. We really enjoyed playing there last year; it's a great vibe in a fantastic theater. There again it's all about the music, great people; music is so powerful that people come out to hear it in Woodstock, it's a tradition there. We are very fortunate to have been there and we're happy to be there again in September. Sweet Marie will be opening for us and also Joe Vulpis with his band."

To discover more about the American Nomads please visit www.americannomadsband.com .