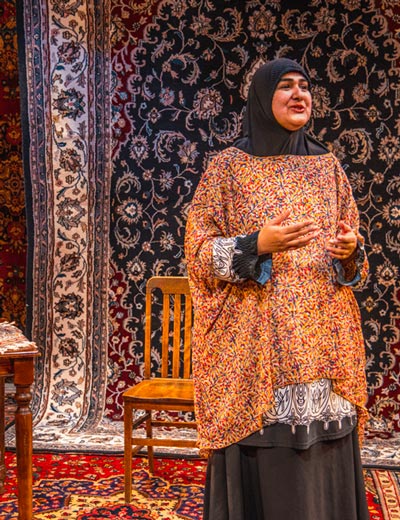 As a follow up to her Immigrant Stories appearance, playwright Rohina Malik returns to Premiere Stages at Kean to host two screenings of her critically-acclaimed solo show Unveiled on Wednesday, July 8.  The screenings will be available on Zoom at 3:00pm and 7:00pm.

Following the event, Rohina will answer audience questions in a live Zoom webinar. All tickets are $10 but access to this special virtual presentation is limited to 100 patrons per performance.

"Rohina Malik, the hugely talented writer-actress at the center of the Victory Gardens solo show "Unveiled," is a remarkable new theatrical voice in Chicago. In her rich, upbeat and very enjoyable 70-minute collection of five character studies of Muslim women in modern-day America, Malik gives voice to characters from whom we hear far too little in the theater."  -- Chris Jones, Chicago Tribune.

Ms. Malik is an Award-winning Chicago playwright and solo performance artist. Her play, Yasmina's Necklace, made its New Jersey premiere at Premiere Stages last September and set attendance records. Her work has been produced at Victory Gardens Theater, Chicago Dramatists and Crossroads Theatre Company in New Brunswick, among others. A proud member of the Dramatists Guild of America, Ms.Malik is the 2018 recipient of the Lee Reynolds Award, given annually to a woman active in any aspect of theatre whose work has helped to illuminate the possibilities for social, cultural or political change.

"We are so pleased to welcome Rohina back to Premiere." stated John J. Wooten, producing artistic director of Premiere Stages "I have no doubt that Unveiled, like Yasmina's Necklace, will resonate with our audiences long after the performance ends."