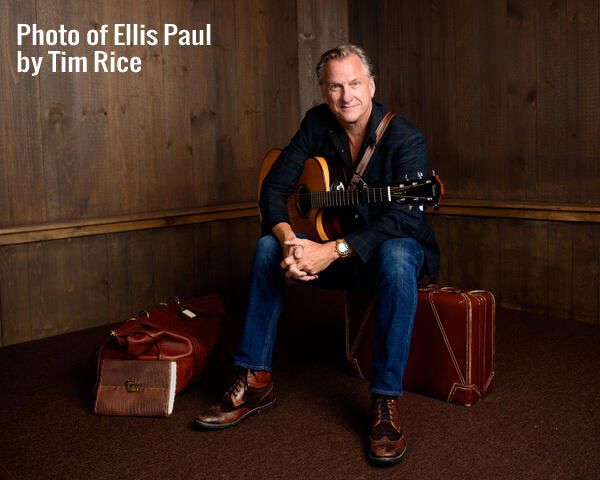 (MONTCLAIR, NJ) -- Outpost in the Burbs presents “Music for Meals,” a virtual concert fundraiser on their Facebook Page to benefit the community service work provided by its soup kitchen and by FACT (Friends Acting and Caring Together) on Thursday, June 25th at 8:00pm. Montclair-based musicians Judy Cangialosi, Carrie Cantor, Rob Halper, and Bob Mellman will perform songs in-the-round along with a special set by singer-songwriter Ellis Paul.

Outpost in the Burbs and FACT have been continuing to provide monthly meals to those in need during the corona virus pandemic. As the regular monthly soupkitchens that provide sit-down meals have been suspended, bagged lunches have been distributed at the Church of the Epiphany/Christ Church in Orange, NJ. Volunteers shop, prepare, and distribute approximately 100 lunches on Saturday afternoons. In addition, FACT has been providing 300 lunches monthly to a Newark shelter.

Ellis Paul has been called a troubadour, a singer/songwriter, a folky, and a storyteller -- all are fair labels for this artist, but they do not quite suffice. However, the tattoo of Woody Guthrie worn proudly on his arm is a good starting place from which to grasp Ellis Paul, for it is from the Woody Guthrie tradition that he hails, and Maine as well. Joni Mitchell, Bob Dylan, and James Taylor are also listed among his influences, and their spirits seem to occasionally grace his work. With an acoustic guitar in hand, he weaves intimate, provocative, and romantic tales of lives that were obviously witnessed by a most-talented voyeur.

Based in Massachusetts, Paul has been called the quintessential Boston songwriter more than a few times and has garnered the recognition and awards to back up that claim, including a shelf full of Boston Music Awards. Since coming onto the scene in 1993 with his independent debut, Say Something, Paul hasn't slowed or weakened as a performer or a writer. Spending two-thirds of most years on the road has helped him perfect both crafts, with a lot of practice onstage and a lot of people whose stories he retells in song. In fact, his 1994 album Stories proved enchanting enough to secure him a deal with Rounder Records and a national following of dedicated fans. Over the years and albums, his songs have gotten more personal. He purposely turned the looking glass onto his own life for 1998's aptly titled Translucent Soul as he publicly worked through the pain of his divorce. Following hot on the heels of 1999's double-CD Live, the new millennium saw Paul's song "The World Ain't Slowing Down" featured in Me, Myself and Irene starring Jim Carrey.

His eighth studio release, a collection of previously unreleased tracks called Sweet Mistakes, arrived in 2001, followed by Speed of Trees (2002), a two-disc career retrospective (2006), a children’s record inspired by the birth of his second daughter called The Dragonfly Races (2008), and, finally, an all-new studio album, The Day After Everything Changed, in January 2010. In 2012, Paul released his second children's record, The Hero in You, which featured songs about Benjamin Franklin, Georgia O' Keefe, Rosa Parks, and Thomas Edison, and other notable Americans that Paul deemed heroic. Chasing Beauty was released in 2014 and his 20th studio album, The Storyteller’s Suitcase, in 2019. New Jersey Stage featured Ellis Paul in our magazine in 2017.

Judy Cangialosi started her love affair with harmony and folk music as a youngster listening to Simon and Garfunkel, The Everly Brothers, early CSN, Harry Chapin and Jim Croce. She bought her first guitar as a freshman in college wanting to join the campus' music ministry program, whose music had strong ties to folk that she so loved. Heavily influenced by the harmony of the Indigo Girls, for over 15 years Judy was a member of several folk acoustic groups that played throughout the Garden State - Eleventh House, Girls Nite Out, Back To Blue, and Letzjamm - which focused on unique creative harmonies and uplifting tunes. Not one to take center stage, she could often be found with a harmonica around her neck, an egg strapped to her foot and a bongo on her lap adding her own spice to the mix. For several years she was a member of North Plainfield's women's resistance a cappella group, Olympia's Daughters, who performed up and down the East Coast's Unitarian Universalist churches, P-Town's Women's Week, and who had opened for such performers as Sonia (from Disappear Fear) and Lucie Blue Tremblay. While living in South Florida she sang with the South Florida Lambda Chorale and had the opportunity to perform at GAALA at Miami's Arscht Center. She's happy to be back in her home state and part of this vibrant folk community here in Montclair, and a new member of Montclair's Women's Fire Choir. She enjoys playing songs that speak to the heart and provide some hope in a trying time.

Carrie Cantor has been singing and playing guitar since she was 12. Her primary influence as a developing musician was probably Joni Mitchell, whose vocal range and pure tones greatly influenced her development as a singer. She has been part of several duos, trios, and bands in the last twelve years, including the rock band El Kabong!; the duo Cantor & Cannon, with Bob Cannon; In the Dreamlife, a duo with local singer-songwriter, Malcolm Marsden; The Neithernors, an alt-rock band that played mostly originals; and, most recently, the trio known as The Asthmatics. Currently, she is performing mostly solo. Carrie delights in dusting off tunes she considers long-forgotten gems that listeners are able to quickly fall in love with all over again. She also brings catchy, easily likeable contemporary tunes to the attention of audiences that may not be up on the latest music.

Rob Halper started his musical education as a clarinet and sax player in school bands and jam sessions. He learned guitar as a teenager and played in various bands throughout high school and college. Rob Halper spent his career working in the television/video/corporate world and one of his most enjoyable jobs was picking out “bumper” music for talk shows at WCBS-TV. He continues enjoying his passion for music, guitar and songwriting and was a member of a songwriting group which included Abbie Gardner of Red Molly and Dave Murphy. His biggest musical influences are the usual suspects, Bob Dylan, The Beatles, The Band and The Byrds. Rob played bass in the local band El Kabong, and has performed as a singer/songwriter at Montclair Center Stage, Trend, Hat City, and other Open Mics in the area. He is proud to be a member of the Board of Trustees at OITB, and films and edits performances for the Outpost’s YouTube channel.

Bob Mellman is a singing encyclopedia of about just about every folk and pop artist that ever walked the face of the earth. And the moon. A Bob Dylan aficionado, he plays bass and sings with Montclair’s The Reticients, performing songs by Bob Dylan and by musicians associated with him.. He also performs as a solo artist, singing his own songs ( including his cheerful apocalyptic warning, "I'm a Dinosaur Living in a World of Men", and the sweet "With Open Arms"). Bob has opened at the Outpost and has also performed at the MESH Café (Montclair Emergency Services for the Homeless). Bob teaches guitar privately (happy to accept new students!!), and teaches ukulele at the Montclair Adult School. His music has been heard in commercials, National Public Radio, and.... with a combination of pride and embarrassment.....on the Dr. Demento Radio Show.

Outpost in the Burbs is an all-volunteer nonprofit outreach organization in Montclair dedicated to building community through music, service, and cultural events. For over 30 years, the Outpost has presented more than 450 concerts by internationally known artists such as Judy Collins, Roger McGuinn, Jorma Kaukonen, Jimmy Webb, Richie Havens, J.D. Souther, The Jayhawks, Nick Lowe, and Dar Williams. In addition to promoting and staffing concerts, Outpost volunteers have donated many hours of their time through programs affiliated with Habitat for Humanity, Toys for Tots, the Human Needs Food Pantry of Montclair, the Community Food Bank of N.J., Dress for Success, MESH (Montclair Emergency Services for the Homeless), and a soup kitchen run by Outpost volunteers in Orange, NJ.

FACT (Friends Acting and Caring Together) began 13 years ago and was established as a 501(c)3 non-profit. Over the years, FACT has been committed to serving over 110 people on the 3rd Saturday of every month at Epiphany Christ Church in Orange and on the 4th Saturday, with St. Paul's Centenary Church in Newark where 300 lunches are prepared for a nearby shelter. Epiphany had been closed for 2 and a half months but has recently reopened and FACT has been serving meals outside. St. Paul's has been closed since then but FACT has also continued, throughout the shut down, preparing 300 lunches at the homes of volunteers. FACT depends on the work of its many dedicated volunteers to continue to bring lunches to the Newark shelter.