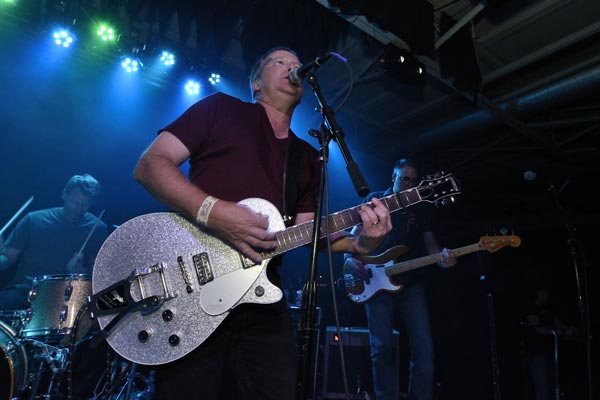 "The release has been pushed back a few weeks because of delayed shipping with the LPs; we could see that there was going to be a delay anyway so we pushed it back a few weeks," says Nick Piunti as he discussed his band's latest release "Downtime" and much more. "The distributors are going to hold off until early June but it will be digitally available on May 22 and not in the stores until June but it will also be available on our Band Camp."

Piunti like so many other experienced rockers says that his interest in music was as simple as black and white.

"I think my first musical thing," he started slowly, "I remember seeing The Beatles on Ed Sullivan on a Sunday evening at my grandmother's house. Soon after that it was The Monkees and thinking, how cool; who wouldn't want to do that? Especially since Davy got all of the women, what a pretty good gig (laughs). Then growing up our band started at 12 years old and we did a lot of Stones songs and some Beatles songs that we could handle and just kind of grew up from there. In our college years there was REM, The Replacements, before that it was Slade and Raspberries; it was always that kind of garage raw Stones sort of thing with some melody like Raspberries or The Beatles. I always try and have both of that in what I do."

"I'm really a singer/songwriter who has been playing in rock bands since I was 12 years old," he continued. "So I kind of grew up with The Beatles, The Who and that kind of stuff in the '70's and I haven't strayed too far from that. We had a childhood band that had been together for about a dozen years and we moved out to L.A. in the early '80's; kind of called it a day and came back home. I still wrote, recorded and then started a family and kind of put the guitar down for a few years. Then when I was 40 I did a solo record and followed that up with a couple of albums with a band called The Respectables and then after that I started making records again; solo stuff in my name. In 2013 was "13 In My Head" and I followed that with "Beyond The Static" and the next two records were with Jem Records, "Trust Your Instinct" and"Temporary High" and now we have a new one coming out with the band name, "Nick Piunti & The Complicated Men" and that is called "Downtime."

"We were getting some nibbles from record companies and we went out to L.A. to try and get serious about it; this was in the '80's so we kind of figured either New York or L.A. and we had a pretty rough Detroit winter so we said, let's go someplace where it is warm. The band was together for 12 years at that point and we said, let's give it one last hurrah so that's what that was about. It was a little bit easier to come home though because my best childhood friend Pete was in the band and after two years of living in L.A. he was kind of saying that maybe it wasn't going to be his future. He fell in love and got married and he's still married since so it was the right move for him and once Pete made that decision it made it a little easier for me because we were like blood brothers and that kind of changed the dynamic. We continued I think for about another year without him in the band but at that time we kind of felt like we were the wrong kind of band to be in L.A. at the time during the hair metal scene. So I decided that I was going to go back home and get back into the family business but with the intention of still writing. Once the band was gone it definitely changed and it didn't feel like there was anyone else depending on ya' to write another song so I definitely slowed down my production of making music."

Ah but once a musician always a musician and Piunti is a prime example of how a true musician and/or artists in general ever rarely completely walk away from their talent. As previously stated, Nick began re-recording and putting out music at age 40; enter Marty Scott of Jem Records had taken a liking to Piunti's music and was familiar with the stages of his career.

"I think Marty discovered me because he was looking for some artists to sign and after I did "!3 In My Head" and "Beyond The Static" he contacted me and asked what I was up to; I said I'm working on the next record and he mentioned that he would like to maybe be the one to put it out. I said, OK possibly, let's talk about it and I met him in New York City because my daughter didn't want to go lay on a beach in Mexico, she wanted to go to New York for her senior year spring break. Weezer had a couple of shows in town so we went and saw Weezer and met Marty and his wife there at the hotel and I thought, this is pretty cool; it's nice to have somebody in your corner when putting a record out instead of just doing it independently."

Now that he has found himself squarely in the midst of a comeback; one would think it shouldn't be difficult given his wealth of experience in the music industry. So why The Complicated Men?

"Actually a friend of mine who guests on the record, Ryan Allen; he kind of came up with that title. I think he had it in his back pocket for one of his projects and never used it because it probably got voted down but we said, OK we'll take that name. I think just the fact that a bunch of middle-aged guys are still making records makes us complicated enough," he chuckled tongue in cheek. Steve Van Zandt said once, "You do it because there are no other options," I have other options, I could make a living in a restaurant that my family has owned forever but once it's in your blood; you have to like something and this is not a bad something."

"Jeff Hupp our bass player actually kind of put this band together; we've been friends and he knew that I didn't have a band that I played live with a lot because we lived so far apart from each other in different parts of Michigan. So he put together our drummer Ron Vensko, Kevin Darnall is the keyboard player, Ryan Allen and Chris Plum also contributed to the album as well."

The new album releases on May 22 with a limited edition red vinyl to follow later on in June. Piunti readily explains the album's title and his songwriting process as he readies for post release promotion in a COVID-19 world.

"The title of the album, "Downtime" is a line from one of the songs, "I don't know what to do with the down time" and my daughter said, "That would be a cool name for the album;" I've got three daughters and the middle one is who I kind of bounce my ideas off of and I said yeah I kind of like that. So of course now it fits a little bit more because nobody could foresee this thing coming. I think we came up with the title a few months ago before there was any sheltering in place or too much down time on our hands."

"There's three or four songs that I actually kind of wrote about a friend of mine who was going through a tough time which turned into a divorce and I was singing them kind of from his viewpoint; not that he needed my help. There were so many songs like that, that my wife wanted a disclaimer on the record saying, "These songs are not about Kelly" but there are some other songs to kind of offset those, more optimistic songs. I mean there are the break-up songs and the make-up songs and reflecting back on 25 years of marriage; it has a nice balance, if the whole album was just about the negative relationship thing it might be a little bit heavy but those songs actually rock so you might not know anyway because they're up tempo and kind of angry but still melodic. All of the songs were written specifically for this record; I don't look back much at old songs because I figure if I didn't finish them at the time or if I didn't choose to put them on a record back then it was because there were better songs; I always like to think that I may get a little better or to maybe look forward."

"I think we had the artwork first and there's red in the artwork and red is kind of like my favorite color and if I'm going to pick one color when I do something it will be red," he stated about the unique color choice for the vinyl; I think we did 500 of the vinyl in red."

The process and the methods may vary but every songwriter has their inspirations and style; so what is the catalyst for Piunti when it comes to creativity?

"I think it's about having your antenna up, you never know what might be inspiring as opposed to the mindset of trying to grab something out of the air. Definitely comes down to major life experiences that can explain a song, sometimes it's not good to get too personal; I don't know. I don't write political songs because they become dated way too quickly or they become a little too preachy and everyone has their own opinion. I've written a couple of those over the years but when I have those thoughts I try to disguise them a little bit; I might hear a line or something but the best ones for me are when melody, guitar riffs and lyrics all kind of come at the same time like a little perfect storm."

"Downtime" and more about Nick Piunti & The Complicated Men, along with the complete Nick Piunti catalog can be found at www.Nickpiunti.com.