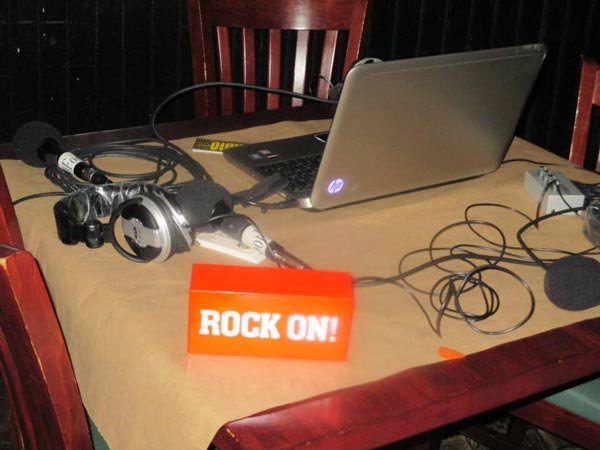 The following are the recollections of a fortunate man; someone who considers himself to be very lucky for reasons too numerous to mention.

January 12, 2009 was a day like all the rest; until it wasn't. You see on that day life changed forever, a second such change within a five year span and one which is still evolving more than a decade later. Four herniated discs put an end to a 20 year career launching a reinvention process and as the metamorphosis continues from truck driver to radio personality, entertainment journalist, musician and more, the truth is; it's really the journey and not the results which matter the most.

The year was 1978, the setting, a local church carnival, the station was WPST FM out of Trenton (TRET-UN for us locals), NJ. A 15 year old drummer stands near a wheel of chance when he is approached by a friend and told to, "Listen!" "Listen to what?" "It's you! You're on the radio, Listen!" Hearing one's music, one's creation played over the airwaves for the first time sends chills from head to toe and creates confidence; a confidence that can re-enforce dreams, goals and unleash a passion from within. Art, no matter what the form can reveal much about others and even more about ourselves if we are only willing to listen.

There are twists and turns along with highs and lows which form this roller coaster we call life. Sometimes there's a need to travel through darkness in order to see the light but without the aforementioned passion and determination to keep moving forward we can easily get defeated when we should be more determined. What's the key? Some say it's "Live in the moment" and others say, "Play the hand you're dealt" but one thing is for sure; every decision, every action and every day we as individuals get to decide where our lives will go. We are responsible for ourselves, our happiness, our successes and our failures.

Several months after that day in January an ad popped up on Craigslist, "Radio show hosts and/or ideas wanted," an ad that was like a beacon of light in this now broadcasters search for re-invention. The station was WIFI 1460 AM out of Burlington County, NJ and after recently switching from an all gospel music format to "Free Form" radio they were looking to add programming.

After completing a broadcasting course at the now long defunct "Allen/Singer School of Broadcasting" in 1983, life as it often does got in the way of things. A full time job, a serious relationship, marriage and children put dreams of rock stardom, radio and more on the back burner but the thought of that warm summer night in '78 never left; it hung like a dense fog always seemingly out of reach.

Now here it was, a second chance; would misfortune be the catalyst that awakens the passion? Next the fog began to lift and it garnered those same chills which led to another thought, "What if there was a way to transfer that feeling, that confidence, that passion to others by giving them a platform to showcase their talents and be heard? Should I revisit my love of radio? How do I help musicians expose their art to others so they may know the same feeling?"

April of 2009 began the planning stages and after mustering the nerve to make the call to WIFI Radio a meeting was arranged. A trip to a large church compound which was set off the beaten path; one where nobody would expect to find a radio station (AND most had trouble doing so) led me to Mr. Aaron Matlock its program director. Aaron's demeanor and quick acceptance of the idea to bring unsigned independent artists to their station in a live format was not only refreshing but surreal. "Wow, this is really going to happen..."

"Rock On Radio" launched on April 26, 2009 occupying the 10 p.m. to 11 p.m. time slot. The first show was not without angst due to the station not notifying the engineer and being locked with seemingly no way to contact anyone upon arrival. The first guests had arrived, a band by the name of W.C. Soulshine who thankfully were very understanding and quite comical which eased the frustrations until a janitor finally gave us access. A quick crash course on the radio console, some telephoned in instructions and we were on the air; albeit 15 minutes late but on the air none the less.

"Rock On Radio" called WIFI home for three years until the decision was made to convert the station back to gospel music and apparently the annual "Christmas Spectacular" erroneously ruffled some feathers. The decision was then made to contact the program's first affiliate, Hamilton Radio, an internet radio station and see if they'd be interested in taking on the program. They immediately accepted the show, allowed for its expansion to the current two hour format and formed a great partnership for several years over which time the affiliations and fan base grew.

The world of internet radio was in its infancy and sadly today still struggles mightily for legitimacy. Prejudices such as "I do real radio I've no time for internet" and "So it's not on FM?" Along with, "I thought you were on real radio; it's only the internet?" were commonly thrown at the program and others like it. The odd thing here is that every terrestrial radio station simulcasts online, alias "The Internet," go figure.

Remember the passion? Get determined not defeated? This is where that came into play as the program pushed forward to 40 Foot Hole Studios where we would broadcast festivals and even sat on stage doing live broadcasts with greats such as the late Pat DiNizio of The Smithereens.

Unfortunately things don't always last and the program was forced to move to PANJ Radio in Lambertville where it resided for a short time before parting ways. What's that saying, "For every door that closes another opens?"

The City of Angels is a non-profit all volunteer organization whose mission is help people who are struggling with addiction. Part of their efforts lie in their own radio station, City of Angels Recovery Radio or COA Radio for short. The station is run by a tireless worker all around good guy and fantastic sound man by the name of Art Ackerman; you may know him as "Engineer Art." Art is the captain of our ship and navigates it very well week in and week out.

COA Radio was looking for programming to augment their full schedule of recovery themed shows and "Rock On Radio" was looking for a new home; it was the perfect partnership. October of 2017 was the first broadcast and it continues to be the program's home today.

Over the years there have been several co-hosts to grace the show; BeeCee was the first, Terry Loda was next, followed by Christine Floyd (better known as just Floyd), the incomparable Cal Schwartz and then Maryann Castello; even this host's daughter, Lyssa Coleman had a few fill-in appearances. Each and every one of them brought something new and refreshing to the program week after week.

Howard Stern has Robin Quivers; we have Claire Henwood Gellman, better known as "Producer Claire." Never has anyone sorted through the mayhem and turned it into the current organized chaos as well as Claire. The "10th Anniversary Bash" was her ball and she slam dunked it; every week since her arrival she has handled the interactive social media and our website www.Dannycolemansrockonradio.com to perfection. There is not enough space to list what she has brought both on and off air to the program and this radio guy considers her his right arm.

Over the years there have been two photographers to capture the artists and the program through their lenses. The first was Joe Powell of JC Powell Photography whose photos adorn our Facebook pages and whose videos documented the early years of the program. The second was the late Tom Callan; Tom had a knack for taking the odd shots, ones that nobody would think of and turning them into mini forms of art. Both made valuable contributions over the years and they have our heartfelt appreciation.

All of these efforts have combined to advance the program which can now be found in podcast form on Anchor.fm/rockonpodcast and on Spotify  under Rockonpodcast; many thanks to David and Janet Rothstein for making this possible.

So as we enter our eleventh year on Sunday April 26, 2020 I wish to thank several people; Gary Wien of Asbury Music/The Penguin Rocks and New Jersey Stage Magazine for giving me a chance. Gary publishes this piece every week, rebroadcasts the show and supports not only the program but musicians day in and day out; he deserves more accolades than this humbled man can give. Thanks Gary, you are the best.

I wish to thank all of our affiliates past and present for helping to bring the talented people from our studio to your devices and then literally all over the globe.

All the former co-hosts, journalists who have given the show coverage, friends and family but most importantly the musicians who trust me with their craft, their reputations and their creations enough to spend two hours with me every Sunday evening; thank you. There is nothing but respect and admiration for what you do; don't ever give up and always stay true to yourselves and follow your passion because when you allow yourself to follow someone else's it's no longer your life.

Lastly, to you, all of the listeners. Without you the program doesn't exist; you keep me laughing, crying and striving to generate a good product and shall I slip you always let me know. Thank you all for tuning in and continuing to do so; I'm indebted to each and every one of you.

That's it! There's a small glimpse into the program which has brought me joy, frustration, passion, consistency and an overwhelming pleasure; one can only hope it has done the same for you...

That's it for this week! Please continue to support live and original music and until next week....ROCK ON!
This week's event listings

Sadly there are no events to list. Please support the live broadcasts and social media shows whenever possible. Rock On!