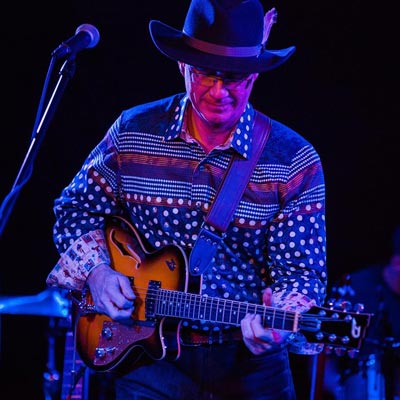 Most artists in today's climate like to release a single here, a single there or perhaps even a three or four song EP every six months under the guise of, "Staying relevant" or catering to, "People's short attention span" but Dave Vargo isn't like most.

You see, Vargo has a style not a formula; when one hears his music you can tell it's pure Dave and not a carbon copy of a previous record or a song that "Worked" in the past. "Burning Through," his debut solo album in 2016 was released because in his words, "It was time" and given his wealth of experience as both a touring musician (See Whitney Houston, Rupert Holmes, Phoebe Snow) and a songwriter I'm sure there is little argument to the contrary.

By his own admission, Vargo stated that he was hesitant to release that first disc but after some gentle nudging from various sources he finally did so. "Burning Through" drew rave reviews for close to a year following its release and Dave with his laid back demeanor quietly went about his business while writing the sequel.

His second effort "spaces in between" is an 11 song masterpiece that is more electrified than acoustic with a robust live sound which he co-produced with Tim Pannella. From the opening track, "This Moment On" it's easy to hear that Dave has taken a more aggressive approach; well worth the three year wait.

Track number two, "Without a Fight" with its studded guitar and bottom heavy yet steady rhythm is a dynamic roller coaster that ebbs and flows nicely.

The third cut, "This Time Around" has that Vargo sound with some great lead guitar nuances underneath the prominent signature acoustic work that has come to define his artistry.

"Rewrites" can be described as having a "Big" sound; far gutsier than the normally relaxed feel of his previous compositions and a standout track for sure.

"Nowhere Else" is a return to his comfort zone featuring a dominant acoustic base with drum and electric guitar tracks that are very well utilized as they complement Vargo's semi-haunting vocals.

Track number six is "Battle Burns" and seems to lament a musician's life or possibly the scars of a relationship or relationships past; lessons learned and experience gained.

"Someday" is a tune that could have fit on either "Burning Through" or this current work; once again exemplifying that Vargo style. Acoustic heavy with the vocal cadence that has become so recognizable; a nice touch and well placed in the track order.

"In Between" flows effortlessly from start to finish with backing vocals credited to Audra Mariel which are mixed perfectly just underneath the surface, enough to stand out yet not overpowering; a nice touch.

"Tracks" is once again "Pure" Dave Vargo, a tender sort of ballad that describes what we all go through at some point in life; "Boxing up all those memories black and white, sorting through all the tracks you've made on this life."

Track number 10 is "Miles Upon Your Heart" and is an apt segue from the previous selection; once again well positioned in the order of things.

Wrapping things up is "Not Alone," and believe this reviewer; you won't be if you fall in love with this disc.

There's always pressure on any artist no matter what their talent to produce a good product, especially if their first is well received; "spaces in between" not only meets those expectations but exceeds them by a wide margin.

Dave Vargo's music can be found on all of the usual music sites and to purchase it or discover more about this fabulous talent, please visit www.davevargomusic.com.