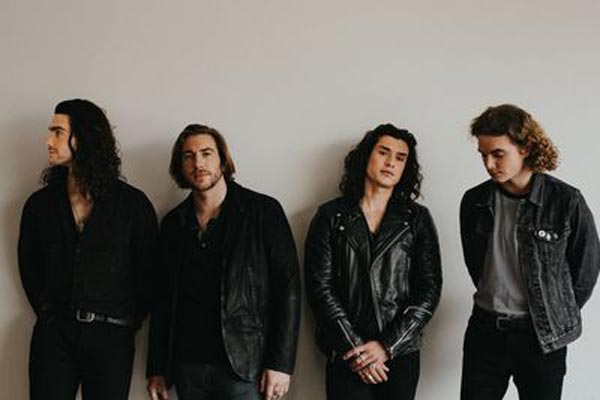 "Raw; I'd say raw is probably the word," says drummer Josh Roossin of  Southern California based band, The Jacks. "The energy, our sound and the way we perform; when we're on stage we are playing everything that you're hearing. We don't use any backing tracks or any extra things. When we record we do it the same way, we're not adding any crazy production that we wouldn't be able to play live. I'm not knocking any bands that do that, that's totally fine and there is nothing wrong with that; that's just the way we like to hear our music, just us playing it so that's why I feel like it's raw and energetic."

Their sound has been compared to that of various British Invasion bands, they've been labeled as "Throwbacks" reminiscent of 1960's and '70's rock and with the recent release of their self-titled EP they are ready to let the masses be the judge.

Now to fully understand how young aspiring musicians develop a more mature sound; Roossin elaborated first on how they were formed and then how they chose their name.

"We all grew up in the Orange County, CA area but our bass player and our guitar player were best friends growing up and they met our lead singer at an open mic night when they went off to college. They contacted me because I went to high school with the bass player and guitar player who are Scott Stone and Thomas Hunter; they were a grade above me and they contacted me as I was graduating and told me that their drummer at the time was leaving the band. They told me, our drummer is leaving, we heard you play the drums; would you like to give it a shot?  I was going into a doctoral program for psychology at a school in Colorado and I told them I wasn't sure how committed I could be because I knew I'd have grad school coming up but I ended up realizing that this was my dream; I always wanted to play music and I never had the right opportunity to do that. So when this came up I finished one semester of school and then fully committed and now I'm doing music full time and I couldn't be happier."

"We got the name because when we first formed we were playing a lot of cover shows in dive bars and we'd play a bunch of different genres of bands like The Beatles, alternative bands like Blink-182 and Hip-hop groups like Kid Cudi and someone in the crowd told us we were like Jacks of all trades because we played so many genres of music. We always liked "The" names like The Doors, The Animals and we always thought those were so classic and we thought, yeah let's do The Jacks. That was the one name that we were spit-ballin' that we didn't hate so we said let's roll with it."

Then again, employing experienced music people during the recording process also can shape not only the sound but outlooks as well.

"We recorded the EP at Sunset Sound in Hollywood in February with producer Matt Wallace who has worked with Maroon 5, Faith No More, The Replacements and sound engineer Will Kennedy and it was mixed by Andrew Scheps who has mixed Adele, Black Sabbath, Red Hot Chili Peppers; we couldn't be more thrilled to work with them, it was a surreal experience and then to get to do this at a legendary studio like Sunset Sound was just amazing. There were songs that we've been sitting on; one of the newest songs we recorded was written about four or five months ago before we started tracking. Another one on there is one we've been opening shows with since November 2017; so it was really exciting to finally record these songs that we've been playing live all of the time and hear them come to life the way that we've always imagined."

Once the EP was complete the next logical step was to choose the first single to be released; according to Roossin that decision was easy.

"Walk Away" is the first single and I think it embodies who The Jacks are perfectly and that's why we chose it. We love the driving drums, the hooky vocal melodies, the thick fuzzy guitars and it's a song that we just love playing. We played it for the first time at our sold out show at The Roxy last July and it had such a great response; from that moment on we decided to record it for the EP and we all unanimously decided that it would be the lead off single."

New EP means new tour; or does it? Roossin spoke of two recent shows but as for a full blown tour, that's in the planning stages.

"Right now we're kind of figuring that part out. We played at The Troubadour back on July 26 which we headlined, we also played Ringo Starr's Birthday Bash on July 6 which was an overwhelming honor because he just chose us as a band that he wanted to perform at the event but as of right now we are possibly going to be hopping back into the studio to start working on EP number two. We're looking to try and get out on the road some time in August; we haven't figured that all out just yet but we plan on being on the road a lot this fall."

To discover more about The Jacks or purchase their EP, please visit www.thejacksbandla.com.