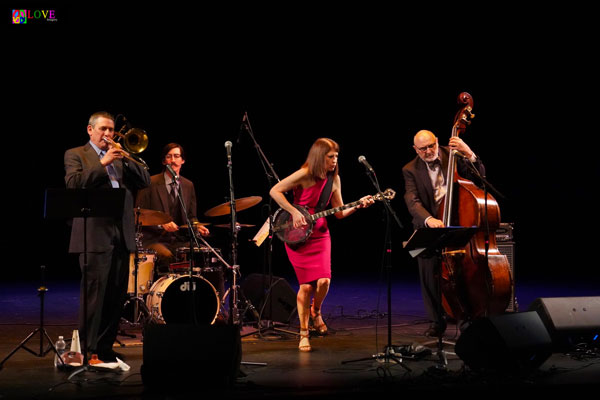 The audience is already in place this Sunday, Sept. 30, 2018 at Toms River, NJ’s Grunin Center of the Arts for a special “Jazz on a Sunday Afternoon” performance by Cynthia Sayer and Her Joyride Quartet entitled The Hot Banjo Show!

“Jazz on a Sunday Afternoon” concert producer Ricky Riccardi welcomes the crowd of music aficionados and introduces his colleague, Sandy Josephson, who reminds the audience that on Sunday October 28, 2018, saxophonist and flutist Don Braden will grace the stage playing selections from his latest album, Earth, Wind and Wonder — a jazz tribute to the music of Earth, Wind and Fire and Stevie Wonder.

Today’s performance begins when Joyride Quartet drummer Arthur Vint — complete with his vintage handlebar mustache — takes the stage solo and begins to play a swing beat. The rest of the group — including Jim Fryer on trombone and Mike Weatherly on bass — join Vint, along with the star of today’s performance, Cynthia Sayer, who takes her spot center stage and twangs out a solo on her four-string banjo! 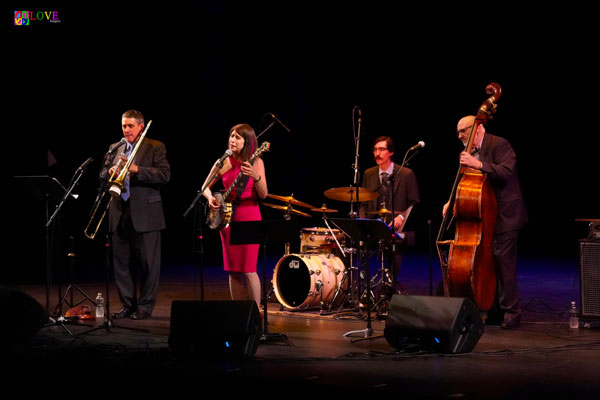 After welcoming the crowd, Sayer — considered one of the world’s preeminent female jazz banjo players — shares some of her knowledge about the banjo with the audience.

Explaining that the banjo you hear when you think about bluegrass and country music is “a whole different instrument” than the one she plays, Sayer states, “That’s a five-string banjo, which is played with fingerpicking.” 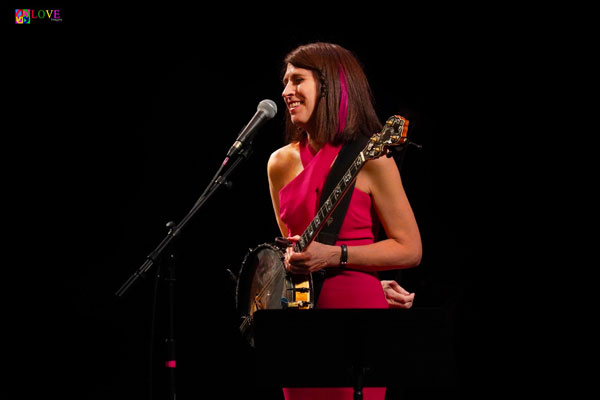 Here, she demonstrates that she performs on what she terms, “the original fretted instrument for jazz” — a four-string banjo, which she strums with a single flat pick.

Moving on to “Move It On Over” — a Hank Williams song done in a jazz style — Cynthia sings, “Move over, little dog, ’cause a big dog is moving in,” before Fryer takes a trombone solo complete with mute, and Weatherly pays a slap bass solo which adds to the jazzy groove.

Revealing that the banjo even “has a history in klezmer music,” Sayer performs one of the highlight numbers of the afternoon, a swinging rendition of “Bei Mir Bist Du Schien,” a song which was recorded by The Andrews Sisters.

Starting off with Freyer on the trombone, Sayer’s banjo and Weatherly’s bass play off one another before Vint’s drums roll and he rides the hi-hat cymbal as Freyer’s trombone growls out his part. 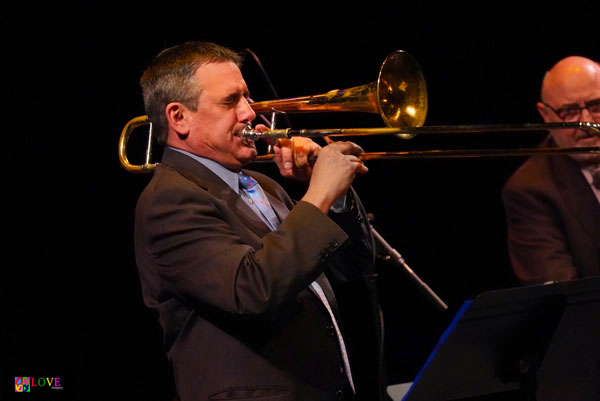 A staple of New Orleans music, Sayer plays her four-string banjo on Hank Williams’ “Jambalaya (On the Bayou)” — a number which features Mike Weatherly on bass and vocals — scatting as he improvises. 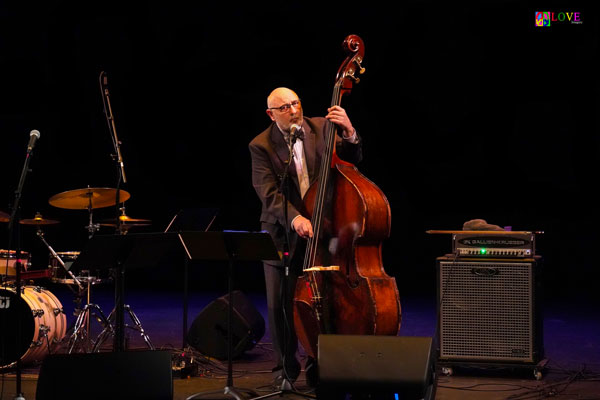 As Weatherly performs, Vint even dons a metal washboard, tapping out a rhythm as the musicians have fun on this classic cajun-flavored piece.

An audience favorite is Sayer’s vocal rendition of Eddie Jefferson’s humorous take on “Pennies from Heaven,” entitled “Benny’s from Heaven.”

Singing about a soldier who returns home after a three-year tour asking where his young son, Benny, came from, his wife repeatedly assures him, “Benny’s from heaven!” leaving the audience smiling on this charming and delightful number. 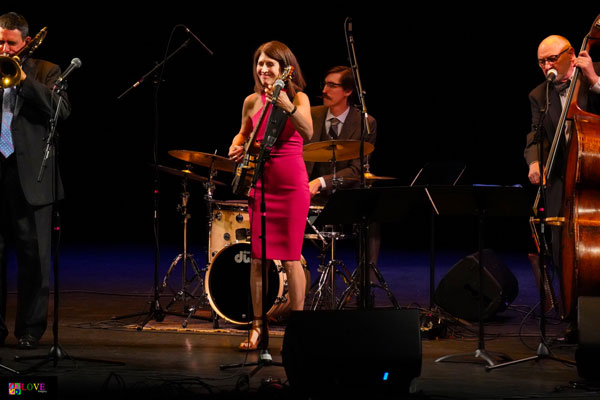 Banjo picking and sliding and a trombone solo are featured on Billie Holiday’s “Them There Eyes,” before Sayer pays tribute to the banjo’s presence in Irish music with a jazz-inspired performance of “The Rakes of Kildare.”

Opening with Sayer picking out the Irish melody on the strings of her banjo, bass and drums enter to make the performance a piece of American jazz as the banjo improvises along with them. Vint is featured on drums as banjo chords and bass root notes punctuate his drum solo, and Jim Freyer shines as he plays a lively trombone solo. 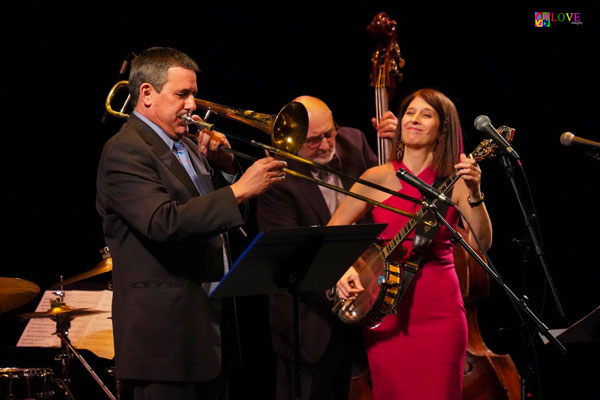 Sayer tells a story about her grandmother, who was born in 1898 and lived to be 106. When Cynthia asked her if, over the course of her lifetime, she had ever heard any of the jazz greats in person, her reply was, “Of course not — I came from a good family.”

Here, Sayer sings and solos on a old-fashioned song which she describes as “a warning to sweet young women moving to the city,” entitled “You’re Nobody’s Sweetheart Now.”

Following hearty applause, she and the Joyride Quartet launch into a tune which Sayer reveals, “I was moved so much by Louis Armstrong’s recording of it that I just had to learn it.” Entitled, “I Get Ideas,” Cynthia sings, “When we are dancing and you’re dangerously near me/I get ideas, I get ideas,” as she strums her banjo on this sweet and lovely tango. 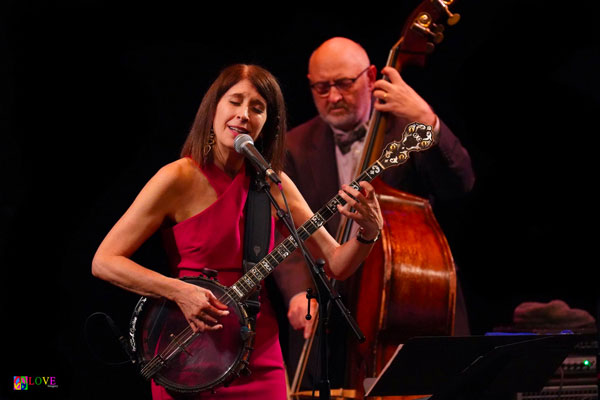 Jim Freyer plays a growling and mellow trombone solo and is also featured on lead vocals on the group’s rendition of “Lay My Burden Down.” 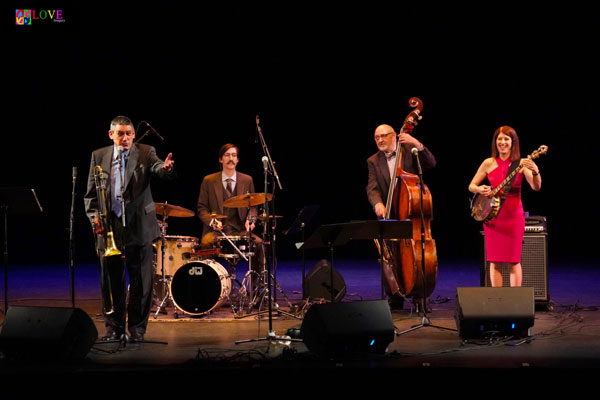 After Freyer leaves the stage, Sayer and Co. perform another highlight number of today’s program — a trio rendition of George Gershwin’s musical masterpiece, “Rhapsody in Blue.” On this classical piece which is usually played by a piano and orchestra, the audience cheers and applauds for Sayer and her colleagues who create a truly unique and dynamic interpretation of the classic compositioin with just jazz banjo, bass, and drums.

After Freyer returns, he, Vint, and Weatherly are featured on their respective instruments on “I Wanna Be Happy”” as Sayer strums along smiling. 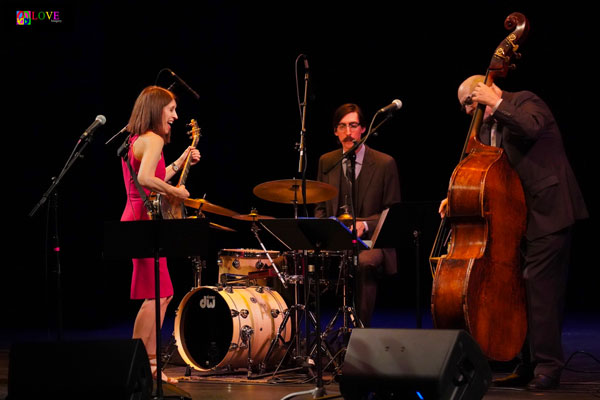 Sayer concludes her Hot Banjo Show today with “an American folk song which is about my instrument.” Ending with her rendition of “Oh, Susanna,” every musician in the band takes a turn in the spotlight before Sayer thanks the audience for coming to spend this Sunday afternoon with her and her group.

As we make our way out into the Grunin Center lobby, we take a moment to catch up with the star of today’s show, Cynthia Sayer, who tells us, “I grew up in Scotch Plains, NJ and, so, I really do love the people in NJ. It’s an extra pleasure to play here,” before noting, “and I even have a group of neighbors from Scotch Plains who came to see me here today!”

When asked how she initially became interested in playing the four-string banjo, Sayer recalls, “As a child, I didn’t know about the different kinds of banjos. I really wanted to play the drums — but my parents bought me a banjo instead.”

“When I decided I would learn how to play it,” she continues, “I worked with a female teacher who was one of the few women banjo teachers at the time, and I loved this teacher. Later, when I discovered I could get paid while having fun playing the banjo, I decided to become a professional,” explaining, “Rather than becoming a different type of professional, I decided to become a musician — but I did have to give myself permission to have fun for a living!” 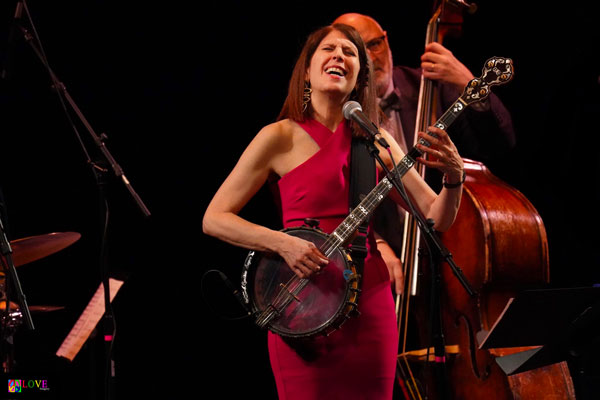 We also chat with several members of the audience who share their opinions of today’s concert with us.

Comments Alicia from Lakewood, “I absolutely loved it. It was fun, festive and amazing!

Rick from Island Heights agrees, stating, “It was very surprising and very enjoyable, and I learned a lot!” before adding, “I play a five-string banjo and it was interesting getting to learn about the four-string string banjo.”

Lisa from Point Pleasant remarks, “I think this show was great. I liked the spontaneous nature of the performance. The musicians worked off of each other and it was very jazzy, so it was cool the way they played together — they are all excellent musicians.”

Barbara from Scotch Plains acknowledges that she is one of the family friends who came here to see Sayer today when she tells us, “I’ve known Cynthia since she was a little girl. I even brought a group of neighbors today to see her,” before exclaiming, “This is the first time any of us have seen her perform and we all loved it!”

Barbara’s friend, Jo from Garfield, agrees, declaring, “This show was outstanding! If Cynthia Sayer is playing anywhere, I will follow her — that’s how great she and all of her musicians are!” 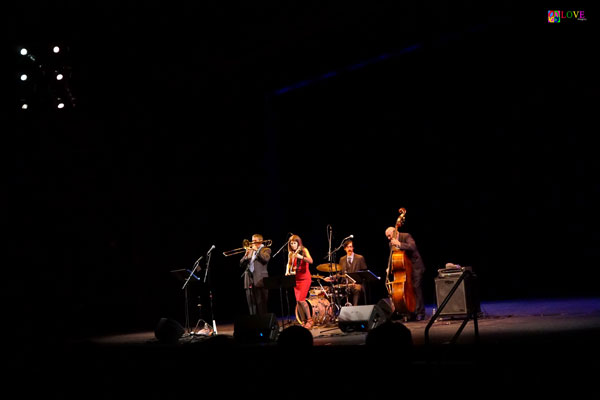 To learn more about Cynthia Sayer, please go to cynthiasayer.com. For information on upcoming performances at Toms River’s Grunin Center of the Arts — including Broadway’s Mandy Gonzalez on November 2 and Max Weinberg’s Jukebox on November 18 — please click on grunincenter.org.