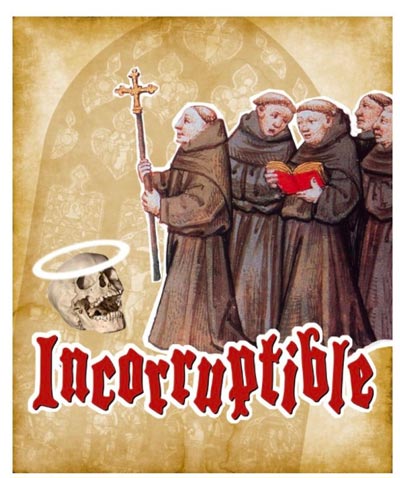 Fun seems to be the operative word for “Incorruptible,” the production that opens the fall season at  the Ritz Theatre Company on Thursday, September 13.

“We wanted a comedy,” said Bruce Curless, the theatre’s Producing Artistic Director, “and we also wanted to present a work by local playwright Michael Hollinger.”

“You start to read the script,” Curless said, “and it doesn’t take long to realize how much fun this show will be.

“To me, the full title, ‘Incorruptible: A Dark Comedy about the Dark Ages,’ gives an accurate description of the numerous plotlines,” Curless points out.

Set at a monastery in Priseaux, France, in 1250 A.D., the story centers around a time of severe strife at the abbey. More than a dozen years have passed since their patron saint (based on St. Foy, a 13-year-old martyred in the 14th century) has worked a single miracle, leaving the church without a reliable reason for ardent pilgrims to visit.

Hollinger, a Lancaster, Pa., native and Assistant Professor of Theatre at Villanova University, said the story, though embellished with artistic license, is based on historical fact.

While touring a cathedral years ago with his wife, who was raised Catholic, the couple came across a sign for a saint’s bones housed in the church.

“I was incredulous,” said Hollinger, “so my wife explained holy relics to me.” This led him on an extensive search for information about relics, the theft of relics, and eventually incorruptibles, deceased holy people who don’t decompose.

“The play was written in the ‘90s, when the televangelist scandals were coming to light,” he said, “which helped fuel further inquiry into the history of the Church and the challenges of running a spiritual ‘business’ without being corrupted.” 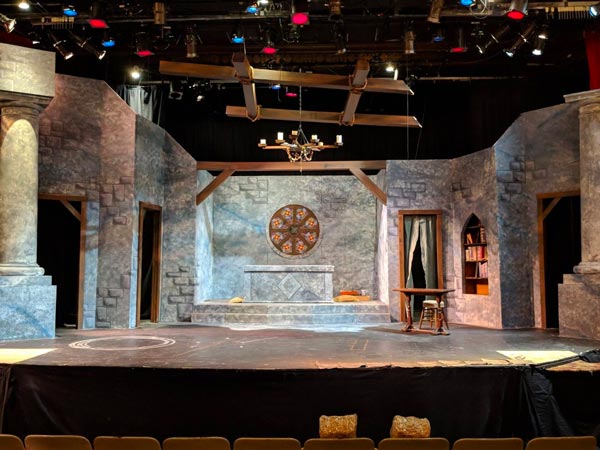 With a story set so long ago and so far away, I asked Hollinger if it was possible to put himself into the play.

“Absolutely,” he said. “While writing the play, I worked as literary manager for a nonprofit theatre in Philadelphia that was committed to premiering plays by emerging playwrights.

“It’s a noble idea,” he said, “but tempered by the ever-present pressure to sell tickets and convince funders that the work is either wildly entertaining or socially beneficial, or both.”

Hollinger’s fictional abbey is also a nonprofit with noble ideas and great economic pressures, Hollinger noted. “This parallel kept the play personal for me.”

Director Al Fuchs had no previous experience with Hollinger or this play, so he did some research on both.

“The more I learned, the more excited I became,” Fuchs said. “Well, excited, and a little intimidated.”

Think about it. Hollinger has serious theatre cred. He teaches theatre at a prominent area university. And he is local. Like, he lives here. He works here. He could drop by the theatre any time.

“We had a couple of phone conversations and it was an amazing resource and opportunity for us,” said Fuchs. “I never had that experience with a playwright before.”

Then Hollinger did come to the theatre to meet with the cast.

“He spent over an hour with the ensemble and he fit right in,” Fuchs said. “It was like he had answers before we asked the questions. He confirmed what we thought we already knew.” 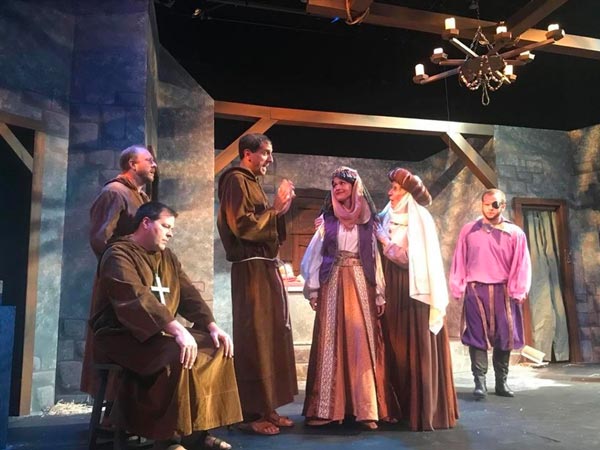 Knowing they were doing the justice to the work went a long way to build up the confidence of the cast. “Hollinger put his stamp and his validation on what we were doing.”

It is apparent why the cast would appreciate having this up-close-and-personal exchange, but I wondered why it was significant for Hollinger to make that connection.

“Since ‘Incorruptible’ was published over 15 years ago, it has traveled widely without me,” said Hollinger, adding that it receives many productions each year that he doesn’t know about until he gets a statement from his publisher. “So, the play doesn’t really need me anymore.”

“However, I love the collaborative nature of theatre, and I’m energized by these interactions,” he said. “Discussing the real-life historical background can help ground the collaborators and point them to parts of the play that support the nuances and complexities of the characters’ interior lives.”

This relationship is clearly reciprocal. Fuchs feels that hearing about the play first-hand from Hollinger was a tremendous help to the

cast. And Hollinger appreciated having a chance to share his insights and ideas with them.

“Ritz director Al Fuchs and his talented cast have been extremely open to hearing my two cents, for which I’m very grateful,” Hollinger said.

And Fuchs turns the compliments back to Hollinger. “The show is so smart and clever,” he said, “and it’s about so many things – fate, survival and finding what you believe in and how that can take you to the next level.” 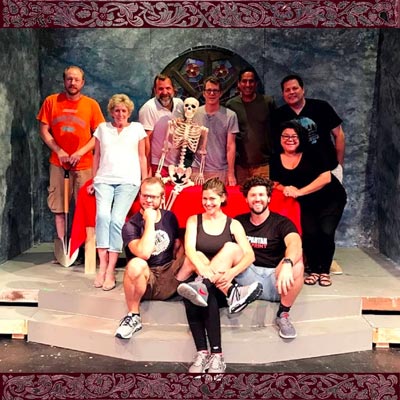 As Curless, Fuchs and the show’s cast and crew busily prepare for Friday’s opening, that sense of fun still reigns.

“The show is inspiring, with a nice, deep message,” Fuchs added. “But it’s still a romp!”

In his time with the Ritz, Fuchs told me, he has become known for doing what he refers to as “door comedies.” “I’ve become somewhat of a master of slamming a door for comedic effect.”

“I love dramas and classical works,” he said, “but I still get the door comedies.”

“Incorruptible” is not all that different.

“It’s still a door comedy,” Fuchs laughed, “only this time I have arches.”

Upcoming events at the Ritz Theatre include: