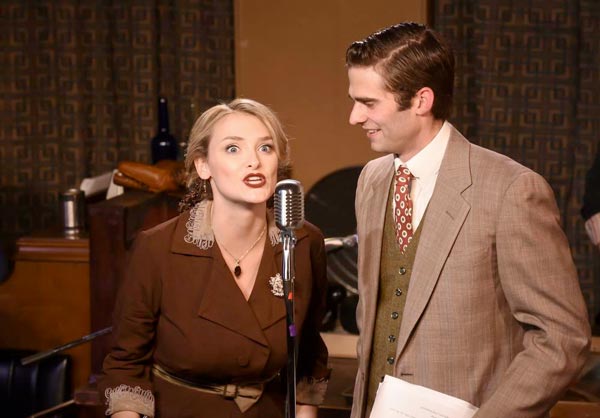 The conceit of choice and what if has been presented in every medium since the dawn of performance and the original Frank Capra film in 1946.  The film has become a holiday season classic unspooled regularly on television.  It was acclaimed for writing and performances by Jimmy Stewart and was nominated for five Academy Awards including Best Picture and has placed on various best film lists for decades.

Joe Landry has adapted the movie as a live broadcast from Hoboken radio station WMST. The warm set and lighting set is configured to resemble a broadcasting studio at Christmas time.  Actors arrange themselves, test the three microphones, place holiday gifts, greet one another and prepare themselves.  The only prop for most of the actors is their scripts, bodies, and voices with three brilliantly playing a wide variety of characters; two playing the main character George Bailey (Graydon Long) and his wife Mary (Maggie Watson).   They rise when they speak “on the air,” as they shift among characters. A sound-effects artist (Matt Bittner) providing sound effects that fit the action. Performed commercials for performance sponsors are inserted as breaks in the action to enhance the illusion of our being part of a radio presentation. 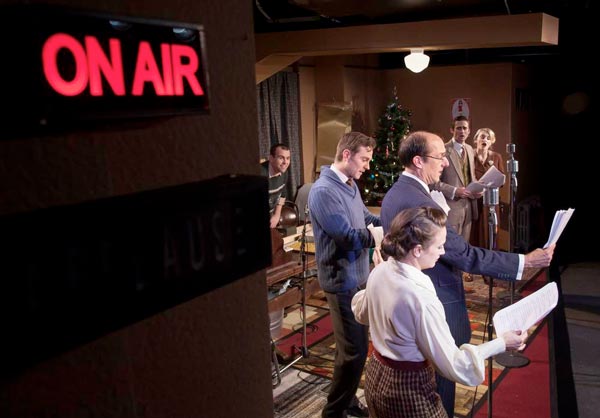 The production is wildly successful given the not-so simple but precise production.  The six actors give life and originality to a chestnut.

For the benefit of those few who don’t know the plot of “It’s a Wonderful Life,” George Bailey is the owner/manager of a building and loan association in the town of Bedford Falls, N.Y. Though he has harbored dreams of making noise in the world outside Bedford Falls, circumstances have kept George perpetually tied to the family business. On Christmas Eve, his uncle loses an $8,000 bank deposit just as an auditor is examining George’s books, threatening ruin for the business. Believing himself to be a complete failure, George contemplates suicide. However, an angel named Clarence appears and stops him by using his powers to show George what the world would have been like if he’d never been born. George quickly realizes the value of his “wonderful” life, and Clarence “wins his wings” for helping to save George’s soul.

The radio-play device distances us slightly from the cinematic source and compels us to focus on the story and the amazing performances on stage.  Director Mark Cirnigliaro has a strong cast; each gifts us with a variety of characters, adept at voice changes.  Joel van Liew has several conversations with himself as both villain Potter and George’s uncle.  Each character is imbued with subtle but important nuanced inflection.  Patrick Massey imbues his with physical changes especially as Clarence.  Michelle David winningly embraces her many roles, as well.  They all seem to be having a good time with one another and the characters they embrace.  Each even gets to play Foley artist, rendering phone conversations from a tin can and a kazoo. 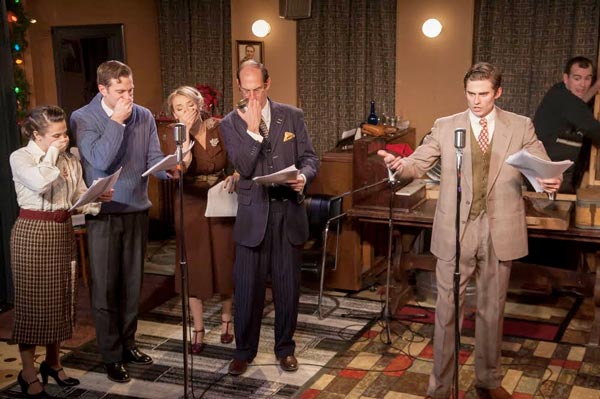 Cirniglariaro’s production wisely has the actors make these iconic roles their own rather than attempting to re-create the performances of their cinematic counterparts.  This is truly an ensemble effort with the production artists – set, lights, sound, stage management and technical direction crucial to successfully and brilliantly bringing the audience into the radio station. Matthew J. Fick’s transformation of the stage into WMST’s studios is realistic, filled with the various sound effect tools, a Christmas tree, curtained windows, and a television-sized radio.  Peter Fogel’s period costumes are perfect.  Majid Younis lighting design warms the proceedings with distinct shifts illuminating the fantasy of life without George Bailey.  Alberto Ruiz’s technical direction is precise, as is Sarah Martens’ stage management and Justin McCormick’s invaluable sound engineering.  They too should take bows along with the able cast.  This is good theater – transformative, moving – with the audience immediately captivated by the actions and sounds created on stage.  Even the commercial jingles are harmonious and effective should you wish to buy a book as a holiday gift or move to Hoboken.  This little coterie of actors and artists create surprisingly vivid and fully believable versatile characters in the world of WMST.

I urge you to grab loved ones and enter this loving amazing production.  It runs through December 18th at Mile Square Theatre.  More information and tickets are available at milesquaretheatre.org 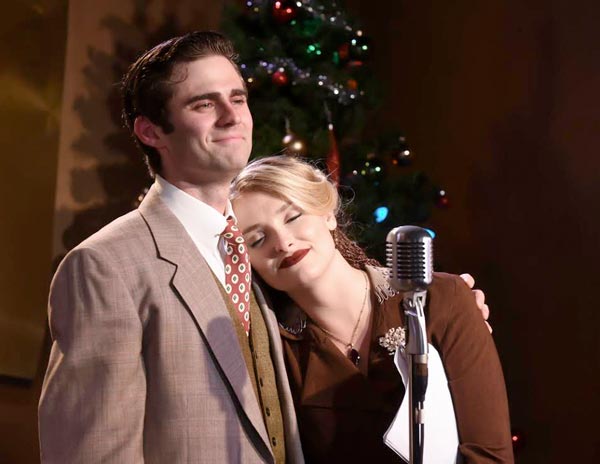