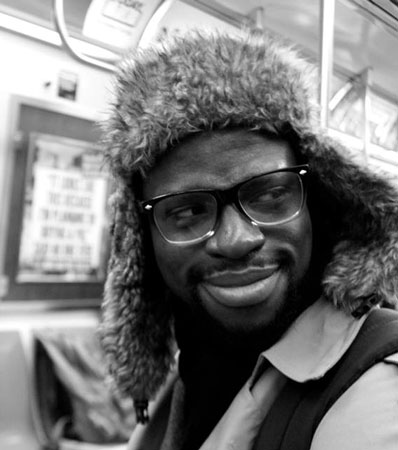 American Theater Group, New Jersey's newest professional theater company, is presenting Jonathan Larson's rock musical tick, tick...BOOM January 28 through February 8 at Hamilton Stage (360 Hamilton Street) in Rahway. The play deals with a struggling artist who is trying to keep it all together; his girlfriend, his childhood buddy… and turning thirty, all while trying to write the next great american musical. Before there Jonathan Larson became a household name with RENT, there was tick, tick...BOOM -- his own story.

American Theater Group's production stars Nicholas Park as Jon, Shannon O'Boyle as Susan, and Michael Luwoye as Jon's best friend. The production is directed by Igor Goldin. New Jersey Stage had the opportunity to talk with Michael Luwoye about his thoughts on the play and on artists and the big 30...

tick, tick...BOOMdeals with the issue of turning 30 and wondering if you’re on the right path or if its time to stop dreaming.  Are you dreading turning 30 too?
I just recently turned turned 24 in December and that in itself has felt like a drastic change from last year. I am, however, actually looking forward to my 30's. While it's more than likely romanticized on my part, there's a sense of stability and self-assurance that I believe comes with that age in life.

Have you ever judged your success up against your friends like he does? Do you still find yourself doing that?
Absolutely! I feel like it's natural to compare yourself in a field like ours. Nowadays, I find myself comparing myself to others and understanding that we're meant to be on the different paths we're partaking in.

When you see characters like Michael who left acting in order to make a living (and now makes a very good living) does that bum you out? Or does it make you want to work harder to reach your goals?
Honestly, neither. The reality of being an actor isn't easy by any means, and making the decision to peruse this as a career comes with ups and downs like every other career. I like the pace in which I'm growing in this field so, while every day isn't pots of gold or butterflies, I don't feel that I'm needing to over-exert myself based on this character's (or other's) successes.

Be honest, have you ever (or do you still) wait tables?  If you have, did you ever wait on anybody famous? Every get any acting jobs from it?
I am currently a cater-waiter when I'm not working on shows, and I actually enjoy it a lot. I've never received any theatre work from a catering job - nor do I ever expect to.

Both RENT and tick, tick...BOOMhelped usher in a new era of musicals based more on rock and roll than before.  As an actor, do you prefer traditional musicals or the slightly edgier rock and roll musical?
I've found myself relating to more traditional musicals in the past, but I've also found that I grow from the youth and edge that rock and roll/more contemporary pieces bring to the table. To me, the latter feels like a more accessible medium to translate what we are currently experiencing in the world today.

What’s your favorite number to sing in the play?
Louder Than Words

What are your overall thoughts on tick, tick...BOOM?  Had you ever seen a production before taking the role?
I was fortunate to see the City Center's production last year. I knew some of the music before watching the show, but seeing the characters live on the stage really brought everything together for me. TTB is a very universal piece that translates the everyday pressures of time, identity, success, and complacency in a real way. Everybody has there own personal tick tick booms whether we acknowledge them or not, and I feel this show does a great job of representing that.

What about working with Igor Goldin.  What’s that been like?
Igor's appreciation for story and intention is very refreshing. It's been a great experience to listen to him dissect this piece and also share our insights with him & play them out onstage.

Finally, what are your thoughts on Jonathan Larson and his work? He sadly died far too soon. If he had lived, do you think he might ever have been able to match or top the works of Rent and tick, tick...BOOM?
I don't know if he would have tried to match or top either of his works. I think Jonathan Larson was very attuned to the universal truths and struggles we all experience day to day. Based on Rent and TTB's content and themes, I have a sense that he would have continued to make personal pieces that would've evolved with and represented the voice of our current era.