Recalls Robbin from Tinton Falls, “I grew up listening to Smokey Robinson! My mom loved him, so I decided to treat her to tickets to tonight’s show. I can’t wait to hear him — I’m going to be in a dreamworld! His music brings you back to a special place and time. It was made with grit and sweat, and is totally authentic.” Robbin’s mom, Ruby from Tinton Falls, agrees, adding, “I’ve seen him in concert a bunch of times. I never miss a Smokey Robinson concert.” 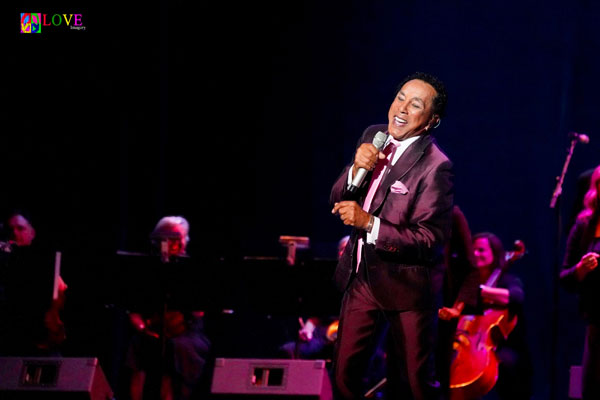 John from Clifton reveals, “I’m a huge fan of Smokey! He’s universal. The music he produced at Motown has always been the backdrop of America.” Ryan from Clifton concurs, noting, “You hear his music everywhere you go. He’s truly legendary.”

Audience members cheer as the house lights dim and an 11-piece orchestra— including guitarist Robert Bowls, bassist Gary Foote, drummer Tony Lewis, and saxophonist Brandon Wright, in addition to background vocalists Karrie Benoit-Morales and Lindsay Walker, a keyboardist, and a string quartet, all under the direction of Demetrious Pappas — takes the stage to play an overture of Smokey Robinson hits. 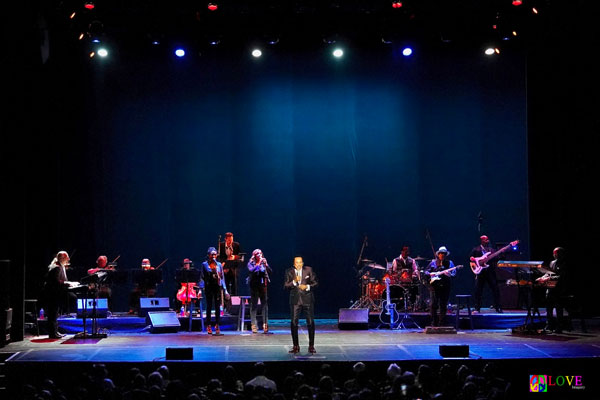 Lights flash and Robinson, 82, takes the stage. The crowd stands and screams as he croons in his smooth and sultry voice, “I don’t care what they think about me/And I don’t care what they say,” on his 1981 hit, “Being With You.” Looking suave in his shimmering suit with pink necktie, he slowly struts across the stage as he sings to the infectious groove that has the crowd swooning with adoration. Backup singer Karrie Benoit-Morales steps to the front of the stage and the pair sings the song face to face in Spanish to avid audience applause. 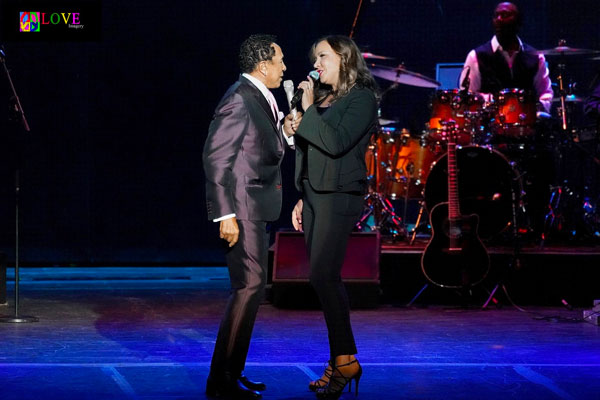 The audience immediately recognizes the intro to the 1967 Smokey Robinson and the Miracles’ hit, “I Second That Emotion.” As Robinson croons, “Oh, but if you feel like lovin’ me/If you got the notion/I second that emotion,” the crowd happily sings along.

Robinson exclaims, “You sounded great! Let’s sing another,” and he and the band launch into his 1962 Miracles’ hit, “You’ve Really Got a Hold on Me.” After he sings the “I don’t like you, but I love you/Seems that I’m always thinking of you” verse, the crowd joins in on the “You really got a hold on me” chorus of this Robinson composition which was covered by The Beatles and also received a 1998 Grammy Hall of Fame Award.

A single spotlight illuminates Robinson on “Quiet Storm,” an R&B ballad that features a Brandon Wright flute solo that floats out over the audience. Then, Wright’s saxophone wails the intro to The Miracles’ 1965 smash, “Ooo Baby Baby.” On this super slow arrangement, the female vocalists trade lines with Smokey, whose rich, stylized, and effortless vocal brings cheers from the crowd. The audience sings along on the ubiquitous “Ooo, baby baby” chorus before Robinson holds a note out at the end which brings people to their feet cheering. 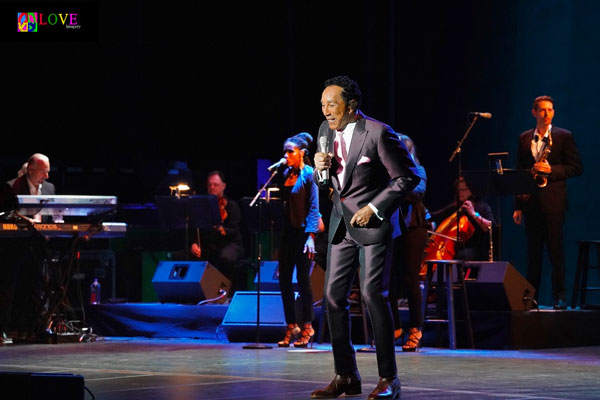 “Well, I guess that’s it!” jokes Robinson, after which an audience member yells out, “I love you!” and Smokey replies, “I love you, too!” The exhuberant crowd whistles and cheers and Robinson shyly responds, “It’s difficult to make me speechless, but you have made me speechless,” before adding, “We love this place. We came to touch, to feel…but right now we’re going to boogie!”

Here, Smokey and Co. launch into a medley of songs Robinson wrote for The Temptations. After opening with a bouncy version of “The Way You Do the Things You Do” and segueing into a driving interpretation of “Get Ready,” the crowd happily sings along on the “I guess you’d say/What can make me feel this way” refrain of a high-energy arrangement of “My Girl.” 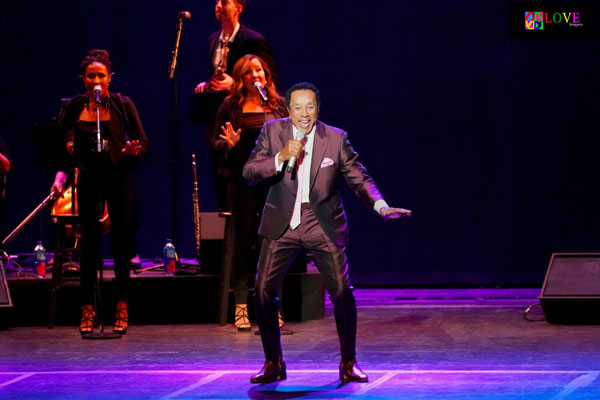 Smokey takes a moment to introduce tonight’s musicians before introducing a song he composed with Stevie Wonder, “The Tears of a Clown.” On this number, Robinson cries, “Now they’re some sad things known to man/But ain’t too much sadder than/The tears of a clown,” backed by the orchestra’s expert accompaniment. 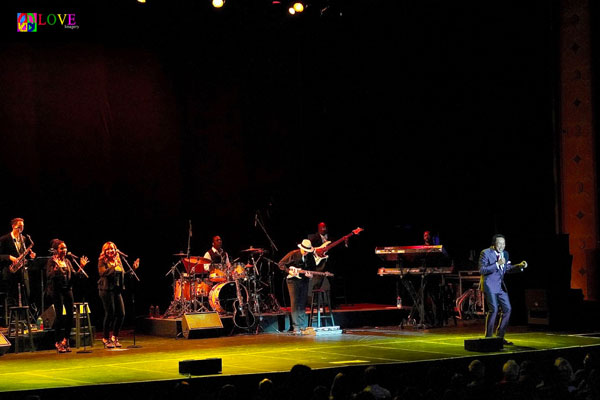 The audience whistles and cheers and several women in the crowd yell out, “I love you!” to which Robinson answers, “I love you, too!” Singing directly to a woman in the front row, Smokey performs his 1991 composition, “I Love Your Face.” Mid-song he chats with the woman, Carol, stating, “I’m so glad you’re here,” and telling her companion, Rick, “I’m glad you’re here, too,” before joking with Carol, “Rick wasn’t paying any attention to you until I came over, and now he has his hand on your thigh!” Cascading piano and swelling strings support Robinson’s smooth vocal that whispers, then soars, with controlled vibrato on this lyrical number which elicits avid cheers and applause. 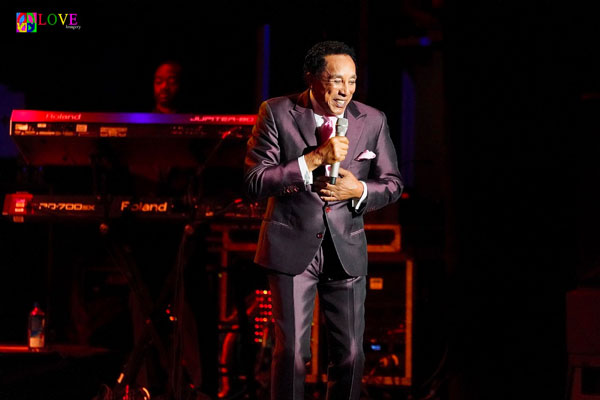 Telling the Count Basie audience, “Count Basie was one of the first bands I ever heard in my life,” Robinson reminisces about his “mom and sister playing 78 rpm records” before performing a standard from his album, Timeless Love, entitled “Fly Me to the Moon.” Robinson’s voice is picture perfect on this swing arrangement which features silky Brandon Wright alto sax playing behind Smokey, who sings with style and ease. After enjoying a sweet and jazzy Robert Bowls guitar solo, Robinson concludes the tune by crying, “I love you,” while pointing to the audience as he croons the lyric.

Following “La Mirada,” a slow funk tune sung in both Spanish and English, Robinson invites music lovers in the crowd to sing along to the “I would do anything/I would go anywhere” chorus of his 1987 hit, “Just to See Her Again.” Dancing and grinding as he vocalizes — sliding notes and improvising with his backup singers — Robinson inspires animated hoots and hollers from the lively crowd.

Music lovers clap along to The Miracles’ 1965 R&B hit, “The Tracks of My Tears.” Initially, the musical arrangement is fairly sparse until the full orchestra comes in, Robinson amps up his performance, and the song crescendos into a wall of sound led by Smokey’s incredibly passionate and soulful vocal. 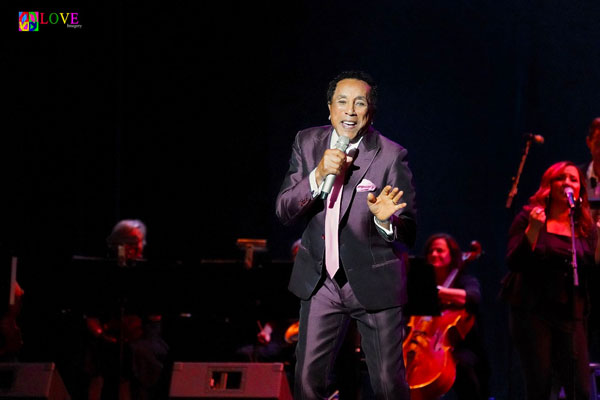 The crowd joins in singing the familiar “So take a good look at my face/You’ll see my smile looks out of place” lyric before music lovers leap to their feet with raucous cheers and applause.

Robinson and the musicians leave the stage, but soon return for an encore performance of Smokey’s 1979 hit, “Cruisin’.” Robinson connects with the audience on this slow-grooving R&B tune as concertgoers let the music take them on a musical journey. Percussionist Tony Lewis gets a funky drumbeat going before Smokey and the band drive the Count Basie congregation to church with a slow and soulful performance that only Smokey can deliver. Robinson divides the spirited crowd into two groups and invites a volunteer from the audience to lead each group in a friendly vocal competition singing “I love it when we’re cruisin’ together.” The ultimate showman, Robinson charms the audience as they sing to him, ending by uniting both groups and having them sing together as one. 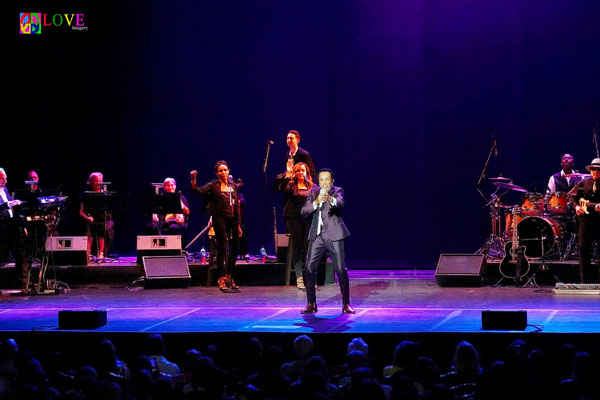 At this high point of the evening, Smokey bows and exits, leaving the crowd singing, cheering, applauding, and feeling good “cruisin’ together.”

As music lovers make their way out of the auditorium, we chat with several audience members who share their thoughts on Robinson’s performance this evening. Exclaims Gail from Bergen County, “Smokey and his musicians were unbelievable! This was one great show, and the audience was really great, too! It’s hard to believe how good he is at his age — he honestly looks like he’s in his 50s, the way he sings and moves!” Stephanie from West Lake Village, CA, agrees, declaring, “I loved this show! My favorite part was ‘Cruisin’. I just loved the way Smokey involved the audience before having everyone sing together at the end.”

Jasmine from Union asserts, “I liked how the show was so interactive! Smokey really knows how to handle a crowd,” and Harvey from Ventnor insists, “He’s still got it! His voice is so strong!” Whereas Darlene from Red Bank affirms, “Smokey Robinson was amazing — unbelievable, really! I loved his show — it was beautiful!” Robin from Hillsboro maintains, “This was the most exciting show I’ve seen here, and the crowd was just great.” 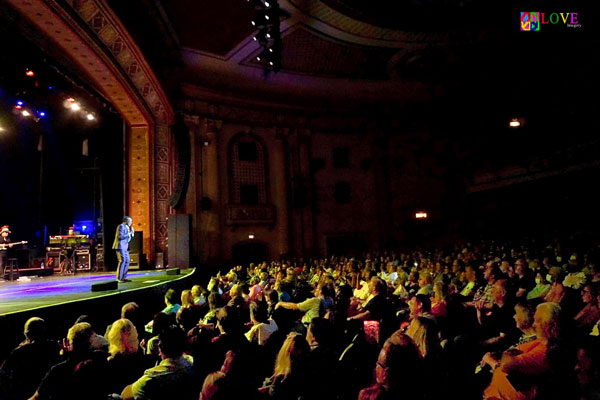 Next, we chat with Carol, the woman Smokey sang “I Love Your Face” to during the show. Recalls Carol, “The first time I saw Smokey Robinson was at the Brooklyn Fox Theater when I was 14 years old.” Acknowledging, “When he sang ‘I Love Your Face’ to me, I was in shock! That was the real thing — he’s got huge talent — not to mention beautiful piercing eyes,” Carol further notes, “He was even more animated tonight than he was when I last saw him 10 years ago. It’s amazing that he’s 82 and still has those moves!”

Asserts her companion, Rick, “I just can’t believe it! Smokey Robinson is performing better than he ever did before. His voice is impeccable. His energy and dancing are stellar, and he is so personable it’s no wonder people love him. At the age of 82, he was trying to be sexy — and he really pulled it off!”

Lastly, we catch up with Robbin and Ruby, with whom we spoke before the show. Remarks mom Ruby, “Smokey Robinson was simply fantastic tonight — I just loved him!” Daughter Robbin agrees, declaring, “This show was fabulous, and Smokey Robinson was incredible! He hasn’t aged one bit. He still sounds the same as he did all those years ago,” prior to concluding, “Everything about that man is timeless!” 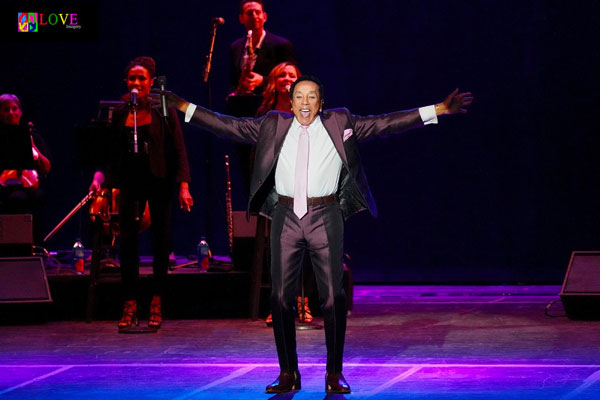 To learn more about Smokey Robinson, please go to smokeyrobinson.com. To find out more about upcoming shows at Red Bank’s Count Basie Center for the Arts — including Boyz II Men on August 26, Art Garfunkel on October 21, and Holiday Doo-Wop with Kenny Vance and the Planotones, Jimmy Clanton, The Crystals’ LaLa Brooks, and more on December 3 — please click on thebasie.org