The Record Company to Play Shows in Jersey, NYC, and Philly in October 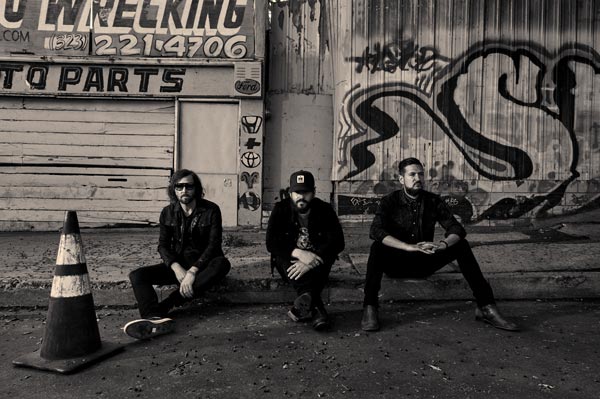 (JERSEY CITY, NJ) -- GRAMMY-nominated rock band The Record Company has announced a new run of tour dates this summer and fall in support of their acclaimed third studio album Play Loud. The tour includes three dates in the Jersey area: October 25 at White Eagle Hall in Jersey City, October 27 at Bowery Ballroom in New York City, and October 28 at Union Transfer in Philadelphia.

The band – consisting of lead singer and guitarist Chris Vos, bassist Alex Stiff, and drummer Marc Carzorla – has earned a well-deserved reputation for their electrifying live shows. Since forming in 2011, they’ve shared bills with John Mayer, My Morning Jacket, Blackberry Smoke, Nathaniel Rateliff, and Bob Seger and the Silver Bullet Band. In announcing these dates, they said “We’re excited to bring our fiery rock’n’roll back across the US!"

White Eagle Hall is located at 337 Newark Avenue in Jersey City, New Jersey. Tickets will be available for purchase online starting May 13 at 10:00am.

The Record Company is breaking old habits on Play Loud. The Los Angeles trio was ready for a change when it came time to make their third album, and they got it: Play Loudpushes the group into uncharted territory with a dozen new tracks that move beyond the homemade sound of The Record Company’s first two albums. Band members Alex Stiff, Chris Vos, and Marc Cazorla brought in GRAMMY-winning producer Dave Sardy (Oasis, Wolfmother, Modest Mouse, LCD Soundsystem) to help broaden their sound.

“We came to the table for our third record with strong demos on songs that could have passed for our first two records, and asked, ‘Can we beat it?’” says singer Chris Vos. “And for the first time, we allowed talented people to come into our small circle to push the music higher.”

“In the past, we were really insular. Everything was just us,” says Stiff, who also played guitar and keyboards and sang on the album. “We totally flipped the process on this record to allow for every idea and possibility, so it wasn’t just the three of us, closed off in our bubble. It was like, ‘Let’s take some risks and see what we can really do.’”

As the title implies, Play Loud is a bigger sounding album, with songs packed full of taut grooves and stick-in-your-head hooks. It’s upbeat, and you can hear why Chris Vos described a common theme in the process as simply: “Fun.” Though there are echoes aplenty of The Record Company’s origins—including recording all the basic tracks together live in the studio during a brief window in May 2020—there’s also a willingness to try out new sounds and styles. Lead single “How High” pairs bristling guitar with a sleek bassline and distorted vocals, while “Paradise” lays back in a deep pocket with a spare, locked-in rhythm from bass and drums, bright bursts of guitar and, on the chorus, swelling keyboards that give the song a sense of lift. There’s dirty electric guitar and a ’90s hip-hop influence on the pulsing track “Gotta Be Movin’,” and a punchy bassline, tight backing vocals and just the right amount of a pop sensibility on “Never Leave You.”

“We definitely wanted to expand,” says Cazorla, who played drums and keyboards on the new album. The Record Company got started in 2011 and were selling out small venues in Los Angeles before they released their first album, 2016’s GRAMMY-nominated Give It Back to You. Stiff produced the debut which yielded three Top 10 hits at Triple-A radio, including “Off the Ground,” which reached No. 1 on Billboard’s Adult Alternative Songs chart. Stiff also produced the trio’s 2018 follow-up, All of This Life, which cracked the Billboard 200 albums chart and launched another Adult Alternative chart-topper with “Life to Fix.” Yet when it came time to make their third record, the musicians knew they wanted to try something different.